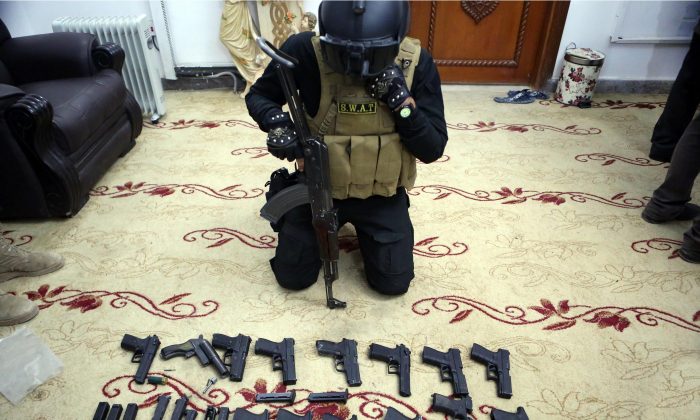 A policeman displayed weapons used by murderers and thieves, at police headquarters in Basra, 340 miles (550 kilometers) southeast of Baghdad, Iraq, on Dec. 19, 2015. Local officials blame the lack of security forces, many of them have been dispatched to front lines, for the soaring thefts, armed robberies, kidnapping for ransom, bloody tribal disputes and drug trafficking. Residents complain that political infighting over government posts and growing influence of Shiite militias have exacerbated the situation and weakened the role of the remaining security forces in the province. (AP Photo/Nabil al-Jurani)
Middle East

BAGHDAD—As the sun sets over Iraq’s southern city of Basra, Ahmed Hilal rushes to lock his door. At night, every knock sends his heart beating faster. In the morning, the father of three or someone he trusts walks his children to school, barely five minutes away.

Fear has become part of daily life amid a surge of violence in Basra, where rampant crime, kidnappings and extortion have become commonplace. Marauding Shiite militiamen drive around in cars with tinted windows and without plates, while local clans wage bloody feuds.

“If someone knocks on the door, I pray to God that nothing bad will happen,” said the 40-year-old Hilal, a school employee. “Any sound of shooting, even if it’s far away, scares us. “

Basra and Iraq’s southern Shiite heartland were spared from the Islamic State group, which seized much of northern and western Iraq in 2014. But as Iraq has struggled to combat the group, security forces have increasingly been redeployed from the south, leaving a security vacuum that has been filled by unruly militias and criminal gangs.

Local officials blame the lack of police for soaring theft, armed robberies, kidnappings for ransom, bloody tribal disputes and an uptick in drug trafficking. Residents complain that infighting over government posts and the growing influence of Shiite militias have exacerbated the situation.

Last month, Hilal’s nephew was shot and killed in broad daylight by car thieves. The young man’s last moments were caught by the surveillance camera of a nearby store. The video shows him trying to run away from the car with the keys after pulling over. One of the attackers chases after him and guns him down before the carjackers speed away.

A Basra security official said an Iraqi military division of about 8,000 troops redeployed from the region in late 2014 to join the fight against IS, along with a police battalion of about 500 troops, leaving nine incomplete police battalions and only one army battalion for the entire Basra province, which has a population of about 3 million.

The result, the official said, speaking on condition of anonymity because he was not authorized to discuss security matters with the media, has been a wave of armed robberies targeting homes, cars, jewelry stores and currency exchanges, as well as a resurgence in tribal clashes and an increase in drug trafficking from neighboring Iran to Gulf Arab states.

Local officials contacted by The Associated Press declined to give specific figures on the violence, but Basra councilman Ahmed Abdul-Hussein was quoted by the al-Mada local newspaper as saying that police registered 1,200 criminal cases in the past four months, mainly killings, kidnappings, robberies and tribal disputes.

Basra, about 550 kilometers (340 miles) southeast of the Baghdad, is Iraq’s second-largest province and home to about 70 percent of its proven oil reserves of 143.1 billion barrels. Located on the Persian Gulf and bordering Kuwait and Iran, it is also Iraq’s only outlet to the sea and the hub for most of the country’s oil exports of nearly 3.8 million barrels a day. Last month, daily exports averaged about 3.215 million barrels from Basra.

Several Basra residents, who spoke to the AP on condition of anonymity fearing for their safety, painted a picture of pervasive lawlessness. Armed tribesmen fight each other and sometimes besiege oil fields, demanding jobs for their sons, they said.

A truck driver described how gunmen opened fire as he was driving on the highway one night in November, just north of Basra. They forced him to pull over, grabbed him and took him to a nearby farm, where they held him for five days. He was released after his family paid $10,000 in ransom.

Traumatized, the truck driver left his job and is now unemployed.

“I’m afraid that I might get kidnapped again and this time, we have no money to pay anymore,” he said.

Basra governor Majid al-Nasrawi recounted a November heist in which a gang robbed employees of a local security company who were on their way to their office from a bank with the equivalent of nearly $1 million in cash for company salaries. Police arrested some of the gang members in December but only retrieved about half the money.

In October, gunmen stole about 600 million Iraqi dinars (about $500,000) in salaries from the state-run South Oil Company, said al-Nasrawi.

Outside Basra, dozens of militants driving SUVs raided a camp for falconry hunters last month in a remote desert area in Samawah province, abducting up to 26 Qatari hunters. Since then, there has been no word on their fate.

In an effort to boost security, the governor recently announced a door-to-door campaign to disarm tribes in Basra’s northern suburbs. He warned provincial security forces and pro-government Shiite militias they would be disarmed, sacked and prosecuted if they take part in tribal fighting.

In recent months, Basra activists have staged protests to demand the resignation of senior local officials and better security and public services. They also recently launched a campaign entitled “Stop the Killing” to draw attention to the violence, activist Haider Abdul-Amir Salman said.

Like many of his friends, Salman said his family has faced attacks and threats. They survived unharmed when gunmen tossed a bomb into their home in September. The 40-year-old doctor and father of two said he escaped a kidnapping attempt on him and his son.

“Basra is suffering,” said Salman. “And the crimes won’t stop as long as weapons are everywhere and the tribes protect the criminals.”