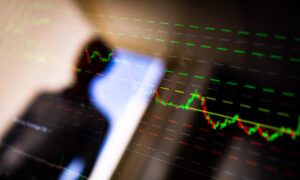 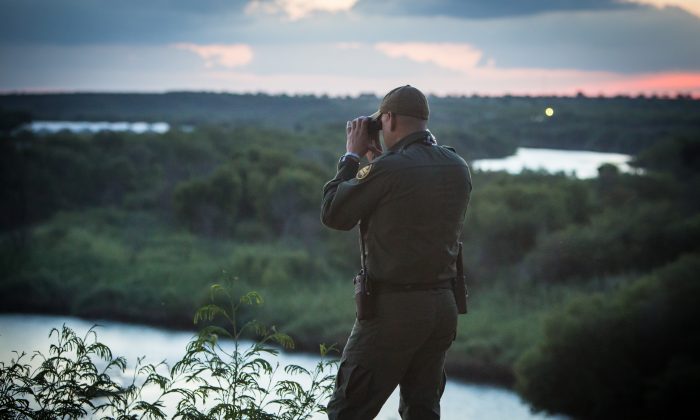 A Border Patrol agent on the lookout for illegal aliens crossing the Rio Grande from Mexico into Texas as the sun sets in the city of Roma on May 31. (Benjamin Chasteen/The Epoch Times)
US Features

ROMA, Texas—Go to the observation deck by the bird sanctuary at the Roma bluffs, we’re told. At sunset, overlooking the Rio Grande, you will see illegal aliens crossing from Mexico into the United States.

It’s such a well-known phenomenon that we even get advice on exactly where to watch. A sheriff stops by and points out the houses across the river owned by cartels (no one crosses without their say-so).

To our left is the Roma-Ciudad Miguel Alemán International Bridge with its constant flow of vehicles and pedestrians.

But to our right is an island, a no-man’s land of sorts—neither Mexico nor the United States own it. It is the perfect cover. Aliens cross from Mexico to the island upstream, out of sight of U.S. Border Patrol. They wait until sunset and then cross the small channel between the island and the United States. Before sunset, the Border Patrol boats stop roaring up and down the river, and not long after,  the agent assigned to sit and watch the island for hours on end finishes his shift.

This half-mile stretch is a tiny fraction of the 2,000 miles of river and dirt that separate the United States and Mexico and that the government charges the Department of Homeland Security to secure.

U.S. Border Patrol was born in 1924 with around 450 agents, mostly on mounted patrols in Texas. In 2003, the agency became part of U.S. Customs and Border Protection (CBP), a division of Homeland Security. CBP takes care of the 328 ports of entry throughout the country (airports, international bridges, waterways), while Border Patrol polices the spaces in between for illegal activity.

Sure enough, just after sundown and right before nightfall, four hunched figures strike out from the island toward the United States. We watch in amazement before Border Patrol agents leap into action. The bank on the U.S. side is steep, scrubby, and tough to negotiate, so the agents’ best bet is to patrol the road at the top.

The chatter on the radio between agents is constant. There is also a surveillance team scanning the live camera feeds and checking in with those on the ground. By now, we know five more people are attempting to cross. The first four have not yet emerged from the brush, which means they are either lying low or have retreated back across the river.

The next thing we hear is that five of them have retreated back to Mexico and four are in a small raft floating down the river, with Border Patrol watching via camera.

“Several months ago, you would see three, four rafts at a time come across loaded with a dozen, maybe fifteen people,” said Border Patrol supervisory agent Marlene Castro. “Now, since January, it has slowed down quite a bit. As soon as it gets dark, you might see a raft or two.”

The sector—one of nine along the southwest border—has a 320-mile river border with Mexico and has been the busiest in illegal crossings for the last four years. Most were family units or unaccompanied minors seeking asylum.

The highest number was in fiscal year 2014, with an average of about 700 apprehensions per day. That year, more than 256,000 illegal immigrants were caught crossing in the sector.

The 60 percent plummet in apprehensions under the new administration is due to renewed consequences, said Rod Kise, public affairs officer for Customs and Border Protection in the Rio Grande Valley. Since November 2016, the price for smuggling someone across the border has increased from around $3,500 to $8,000 in some areas, according to Homeland Security Secretary John Kelly.

“Most everybody and their family mortgaged their house, took loans,” to pay the smugglers, Kise said. “But now, why are they going to waste all that money when they know they’re going to be deported? There’s the perception of consequence now.”

The 150 average per day that Border Patrol apprehends now is a mixture of asylum seekers, drug runners, and other illegal aliens. The asylum seekers want to be caught by Border Patrol and seek them out once they cross the river—then they can claim asylum and get taken to a facility for processing. If they have family already in the United States (even illegally), they have a higher chance of then being released with a future immigration court date to determine their status.

The drop in illegal crossings is unprecedented, said Brandon Judd, president of the National Border Patrol Council, in a July 17 interview on “Fox & Friends.”

“This president has done exactly what he promised to do, and we do have border security like we expect to see,” Judd said.

In March, Judd testified at a Senate hearing that he’d never seen the morale lower than it had been over the past four years. Now, he said, it is completely different.

“There’s a vibe, there’s an energy in the Border Patrol that’s never been there before. In the 20 years that I’ve been in the patrol, we haven’t seen this type of energy, and we’re excited because we signed up to do a job and this president is allowing us to do that job,” Judd said.

With southwest border apprehensions down, Border Patrol tries to focus most of its resources on drug runners and other illegal aliens who attempt to evade capture. Both groups have a high rate of criminal history and prior deportations.

“Now [agents] are doing their real mission of border security—stopping the drugs, stopping the criminal aliens that are coming in, and of course, focusing on our priority mission, which is an anti-terrorist mission, as well,” said Manuel Padilla, Border Patrol chief for the Rio Grande Valley Sector. “We still have the drugs coming in, which we’re seeing some significant increases from, if you compare this time to the beginning of the year when we were focusing on family units and unaccompanied children.”

The sector has transitioned to a more intelligence-based operation, and surveillance is critical for locating illegal activity. Sensors and cameras, surveillance towers, blimps, and helicopters with thermal imaging that pick up body heat are all part of the arsenal.

The technology is often ex-military from the Department of Defense reuse program, said Kise.

“So it was in Iraq and Afghanistan, and then when it was no longer needed there, it was turned over here,” he said.

With the river doubling as the official demarcation between the United States and Mexico, tunnels are not an issue like they are out West. Neither is the use of catapults to launch bales of drugs over the border.

But old technology and methods are still valuable. More than three dozen horses—the original Border Patrol vehicle—operate in the Rio Grande Valley, especially in the dense scrub, and for situations that call for speed and agility. Tires are still dragged behind trucks to smooth out the gravel roads, making it possible to see tracks if anyone tries to cross.

The border fencing in the sector was constructed between 2007 and 2011 following the Secure Fence Act of 2006, which had bipartisan support. But fencing, or tactical infrastructure, is a complicated beast in southern Texas. Much of the land by the river is privately owned and would need to be acquired by the federal government to build fencing and support roads. Other land includes thousands of acres of wildlife refuge and nature preserves along the Rio Grande corridor.

Patrolling From the Sky

An early morning ride in one of the several helicopters gives insight into how eyes in the sky can assist agents on the ground. The helicopters are part of Air and Marine Operations, an arm of Customs and Border Protection.

After a short 6 a.m. briefing, the teams are given their assignments, and it’s time to take off in a 1971 Huey. There are no doors, and on one side is an agent with a long range rifle, called a “long arm.”

Radio chatter alerted them to two aliens running from agents near Salineño, a small border town on the western end of the Rio Grande Valley Sector. Agents had caught five aliens, but two had evaded them.

“Agents were already on sign. … They were doing the tracking of the foot signs,” said pilot James Pridgen. “And our main job at that point is to help them draw a line from where they’re at to anything north of that. So we just started making slow, small turns up toward that, trying to follow the sign on the ground.”

The radio communication is constant and everyone is on high alert for any movement. Usually, when a helicopter is overhead, aliens tend to stop running, hunker down, and hide.

“This allows the agents to continue to follow their footprints, and they’ll ultimately catch or apprehend them,” Pridgen said.

Border Patrol agents have to chase aliens until they either give up or the agent tackles them. In this case, it was a bit of both.

“One of them this morning, we saw them break out of a brush and the agent was looking north, and they broke out southways, and one of our crew members actually saw the two breaking south. That’s when we followed them and the agents apprehended them.”

The weather, the wind, and the equipment dictate the methods that the helicopter teams can utilize to help locate aliens.

“We always have to keep the aircraft pointed into the wind, so we’re using a technique that, if someone is in a brush line, with this aircraft here, we typically blow the brush line apart so we can actually see down inside of it,” Pridgen said.

The smaller helicopters have an array of sensors that enable the aircraft to stay up higher and to use body heat to locate the aliens.

Pridgen said the helicopter units help with both illegal aliens and drug runners. The latter are easy to spot.

“Typically, [the drugs] will be in burlap sacks, tightened-up burlap sacks, and they’ll make large bundles out of them. They’ll have straps on them made out of blue jean or whatever, and they’ll put them on their backs and mule them over.”

In fiscal year 2016, of all sectors, the Rio Grande Valley seized the most cocaine (1,460 pounds) and the second-largest haul of marijuana (326,000 pounds), behind Tucson, Arizona.

The Rio Grande Valley and Tucson sectors also experienced the most assaults against agents, with 151 and 123 assaults, respectively, over the same period.

“Border Patrol agents are among the most assaulted federal law enforcement personnel in the country,” said Carla Provost, acting Border Patrol chief, at a Senate hearing on June 21.

Provost said that as of June 1 this year, Border Patrol agents were assaulted more than 550 times compared to fewer than 300 times during the same reporting period last year.

“As we tighten down on border security, our experience over the years has been, as we do a better job, unfortunately the violence against our men and women rises,” she said.

When Border Patrol agents capture an alien, they take them to a detention facility and hand over to Immigration and Customs Enforcement (ICE). ICE verifies the alien’s identity and checks for any criminal records. Depending on the circumstances, the alien is usually then either deported, detained for further investigation, or permitted entry with a future court date.

The majority of adults who are released into the country have to wear an ankle monitoring device, which generally ensures their appearance at immigration court at the scheduled time. In McAllen, Texas, these people are dropped off at the local Greyhound bus station so they can travel to wherever they have family in the United States.