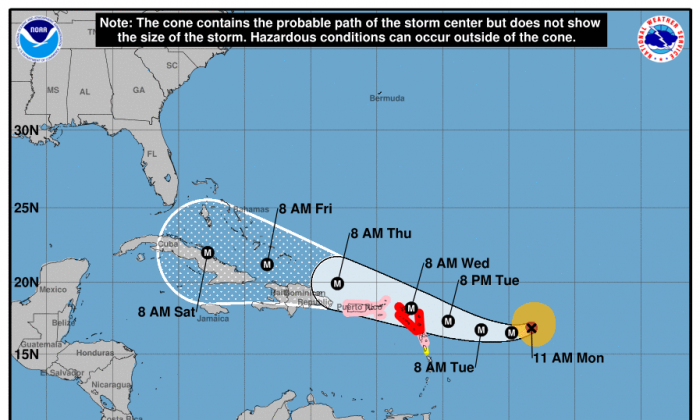 Hurricane Irma grew to wind forces of 120 miles per hour by 8 a.m. on Monday with at least one model predicting that the storm will hit south Florida on Sept. 11.

Irma intensified to a Category 3 storm on Sunday and is expected to gain strength on Monday and Tuesday.

While there is no definitive prediction whether Irma will reach the U.S., a storm forecast model developed by the American National Oceanic and Atmospheric Administration and mapped by Ventusky.com shows the hurricane hitting south Florida on Sept. 11 with winds reaching 119 miles per hour. That prediction was based on weather data available at 11 a.m. Monday.

The storm was moving west towards the Caribbean at 14 miles per hour as of the 8 a.m. advisory by the National Hurricane Center. At the time of the advisory, Irma was 610 miles from Leewards Islands with winds felt up to 30 miles from the eye of the storm.

It’s unclear what path Irma will take, but just in case, Florida residents have been encouraged to go get supplies by the middle of the week in case the hurricane hits Florida, CBS12 in South Florida reported.

Jacob Tibbs, a Home Depot manager in Palm Beach County, noted that “shoppers are already coming into the hardware store, picking up hurricane items: from generators to water,” CBS12 reported.

If people wait until the last minute, they might not be able to buy up basic supplies in time if stores run out.

“You can’t take a chance,” said David Yates, a 42-year-old automotive technician, told the website as he was buying supplies, including propane canisters, chain saw supplies, and mosquito repellent.