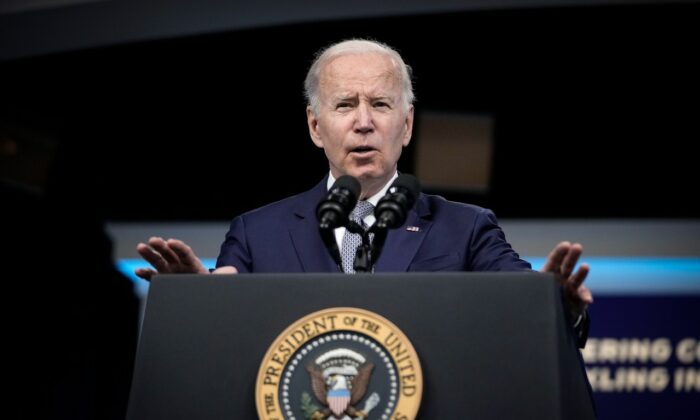 President Joe Biden speaks about inflation and the economy in the South Court Auditorium on the White House campus in Washington on May 10, 2022. (Drew Angerer/Getty Images)
Executive Branch

President Joe Biden talked about how American farmers can help in easing global food shortages and fighting inflation during his visit to a farm on May 11.

“Right now, America is fighting on two fronts. At home, it’s inflation and rising prices. Abroad, it’s helping Ukrainians defend their democracy and feeding those who are left hungry around the world because Russian atrocities exist,” Biden said at the family-run farm in Kankakee, according to a White House press release.

“Our farmers are helping on both fronts, reducing the price of food at home and expanding production and feeding the world in need.”

The administration has announced new actions to support American farmers. Washington will increase the number of counties eligible for double cropping insurance. In a double cropping system, a farmer can plant a second crop on the same land the same year, thus boosting productivity.

With 681 more counties coming under the coverage of double cropping insurance, the total number of American counties availing this benefit rises to 1,935.

During his Kankakee farm speech, Biden claimed that in his first year in office, American agriculture exports “shattered all previous records” with $177 billion worth of products exported last year.

He also claimed that through the American Rescue Plan, the government is granting $1 billion to help smaller meat processors “expand their capacity.”

Multiple House Democrats, including Speaker Nancy Pelosi (D-Calif.), had met with Biden on May 10, warning about a food crisis extending beyond Ukrainian borders.

“It’s going to result in a hunger crisis, much worse than anybody anticipated,” Rep. Jim McGovern (D-Mass.) said following the White House meeting.

Biden’s speech came as the Bureau of Labor Statistics reported the 12-month inflation in April at 8.3 percent. It was only marginally lower than the 8.5 percent March inflation which was a four-decade high.

Food price inflation in the last 12 months was up by 9.4 percent, with grocery prices higher by 10.8 percent. The main contributors to April’s inflation numbers were food, shelter, new vehicles, and airfare.

In a speech on May 10, Biden renewed calls to pass pieces of his legislative agenda that he promised will lower costs for American citizens. This includes investment in non-fossil fuel energy sources, raising taxes on wealthy Americans and corporations, and building more government housing.

However, EJ Antoni, an economic research fellow at the Heritage Foundation, criticized Biden’s proposal in an interview with The Epoch Times.

“The president has a list of items that do not address the underlying costs of inflation, and those are the bad actions of the Federal Reserve, and the bad actions of this administration in its war on reliable energy—namely coal, oil, and natural gas produced here in America,” Antoni said.

The research fellow pointed out that the Fed had printed excess money to finance the rising deficit created as a result of higher spending by the Biden administration, especially through the nearly $2 trillion American Rescue Plan. Treasury Secretary Janet Yellen admitted on May 4 that the spending plan ended up feeding inflation.