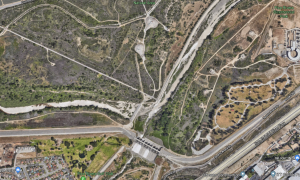 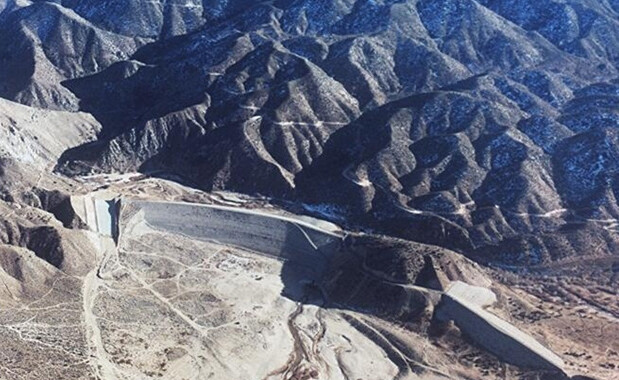 An aging dam in Southern California’s high desert could threaten the safety of thousands of residents if nothing is done to strengthen it before an extreme storm occurs, say officials for the U.S. Army Corps of Engineers.

The Mojave River Dam poses a high risk to Victorville, Hesperia, Apple Valley, and Barstow—16,000 people and $1.5 billion worth of property, the Corps of Engineers said in a media release.

The agency recently changed the status of the 48-year-old earthen dam from “low” to “high urgency” status based on a risk assessment study that found the 200-foot-tall dam could overflow during “an extreme flood event,” and potentially inundate communities as far away as Baker 140 miles downstream.

“The dam has never experienced spillway flow or a flood event that has loaded the dam significantly,” Col. Aaron Barta, commander of the Corps’ Los Angeles District said in the release. “This is a storm that is unlikely to occur, but it is nonetheless a real possibility and one we must be prepared for.”

Out of the 300,000 people who live in the basin, about 16,000 live in high-risk areas downstream of the dam, Luciano Vera, a spokesman for the Corps of Engineers, told The Epoch Times in an interview.

For water to spill over the top of the dam, it would take a 10,000-year storm, which means the chances of it happening are one in 10,000 in any given year, or a 0.01 percent chance. Even for water to reach the emergency spillway, it would take a 900-year storm, a one in 900 annual chance. Water levels have never risen to the top of the dam, although in 2005 they reached a record 77 feet—about 72 feet below its concrete emergency spillway.

The dam is located on the northern side of the San Bernardino Mountains, downstream from the confluence of the West Fork Mojave River and Deep Creek, which form the Mojave River. The river is fed by runoff water from about 215 square miles of mountainous terrain upstream of the dam, and its basin below spans 4,700 square miles of desert.

The Los Angeles District owns and operates 17 dams across California, Nevada, and Arizona that reduce flooding risk for around seven million people and $200 billion in property.

All the dams are rated on the Dam Safety Action Class (DSAC) system from DSAC 1 to DSAC 4, with DSAC 1 representing the most urgent risk scenario and DSAC 4 the least urgent, Vera said.

The change in the rating allows the Corps of Engineers to request a feasibility study.

“In that study, we do take climate change into account. Our team pushed it past that. We look at even the most severe storms that would cause any dam to fail,” Vera said. “It would be a really rare event. It’s hard to quantify. We can’t say we’re fixing the dam because of climate change. That’s not accurate. So, while I’m saying there are more storm events, I’m not saying they were caused by climate change.”

The Corps of Engineers doesn’t need congressional authorization for the feasibility study to go ahead because federal funds are already allocated for operations, maintenance, and to conduct studies on federal dams, he said.

As a safety precaution, high desert residents are advised to prepare an emergency kit, register phones with the San Bernardino County Telephone Emergency Notification System for alerts, create an evacuation plan, and establish a family emergency communication plan, according to the agency.

When contacted by The Epoch Times, Rachel Molina, a spokesperson for City of Hesperia, said staff are aware of the risk the dam poses.

“With this change a couple of weeks ago, we are reviewing our emergency plans,” she said. “The emergency communications plan is very important in any emergency to be able to notify residents of any evacuation that might be necessary.”

Because the dam is under federal jurisdiction, the burden of responsibility for safety falls squarely on the shoulders of the Army Corps of Engineers.

“While we appreciate them updating us, it’s their responsibility to maintain the dam. It’s very unlikely that we will see water come over the top of this dam,” Molina said. “Whether it’s low risk or high risk, we have to plan for the dam regardless. It’s outside the city limits, but it is close and that’s why it’s already identified in our hazard mitigation plan.”

Other dams in the state have also shown signs of risk to downstream communities in recent years.

The 60-year-old Whittier Narrows Dam currently has a DSAC 1 rating, a “very high urgency risk” to people who live and work along the San Gabriel River floodplain.

“If the Whittier dam were to breach, it would affect 1.2 million people all the way down to Long Beach,” said Vera, adding that the number of people and amount of property downstream from dams also affects DSAC ratings.

In 2017, heavy rains and floodwaters damaged a concrete spillway at the Oroville Dam, causing more than 180,000 area residents to be evacuated.

While many people enjoy the recreational benefits of lakes that dams create, they should never become too complacent, Vera said.

“There are no guarantees when it comes to Mother Nature. You never know, and even if you reduce the risk, you can’t eliminate that risk,” he said. “We’re coming up on flood season and these flash floods can happen in a matter of hours.”