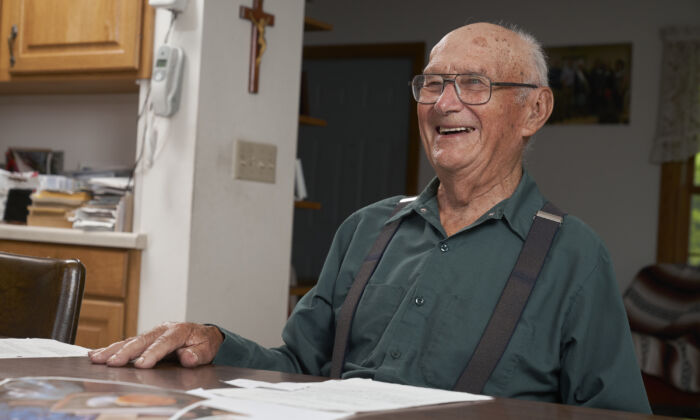 Frank Falter spent a lifetime on his family's Wisconsin farm and has finally retired at age 93, in August 2022. (Chris Duzynski/The Epoch Times)
US Features

WEST BEND, Wisc.—Frank Falter remembers working alongside his father and siblings, planting the fields, harvesting hay, mucking the stalls, feeding, and milking the cows on what was once his father’s 120-acre farm near West Bend, Wisconsin.

These childhood chores led to a lifetime of farming until Falter, 93, retired this year. Falter joins a decades-long trend of family farms vanishing from the nation’s landscape.

Disappearing are the farms passed from father to son to grandson. Large commercial operations with hundreds of cows and mass-produced crops are taking their place.

“I got a lot of satisfaction out of planting a crop—doing my best to control weeds and other pests, watching them grow and then harvesting,” said Falter.

“When some men retire they start a hobby, go fishing, or golfing. I don’t fish or golf. My hobby is farming—unfortunately, I have been dealing with some health issues, so I decided it was time to retire.”

Frank has lived on his family farm since he was born in the farmhouse on Dec. 18, 1928, in the township of Trenton in Washington County.

He was the fourth of six surviving children to Leo and Adela Falter. As with his older siblings, his mother delivered him on her own. Only one of the Falter children was born in a hospital.

Ten years before Frank was born, Leo Falter purchased the 120-acre farm in Wisconsin and provided for his growing family through grueling long hours working the fields and caring for the animals.

“There were about 65 acres of tillable farmland; the remainder was pasture and woodland. Horses were used to till the soil and pull the planting and harvesting machinery,” said Frank.

“At that time and for about the next 30 years, there were about 15 cows that were milked by hand. The farm chores were done with a fork or shovel, pail or bushel basket, or a wheelbarrow. There were also a few hogs and a flock of laying hens on the farm.”

In 1941, when Frank was 13, Leo purchased a used tractor and plow to relieve the horses of the heavy fieldwork.

Around that time, they had electricity installed which enabled them to retire the kerosene lamps and lanterns that they used to light the house and barn.

“Around 1948, we finally installed running water to the house, which amounted to one cold water faucet in the kitchen. Before that, we pumped water with a hand pump at the well and carried it into the house with a pail.

“The water to the barn for the livestock had been pumped using a small gasoline engine for many years,” Frank explained. “My father was one of the first farms to install drinking cups for the cows in the barn—a lot of other farmers chased their cattle into a creek or something.”

For most of his elementary years, Frank attended Holy Trinity School, except for one year when he attended the one-room Pleasant Hill Country School.

In the early mornings and late afternoons, Frank and his siblings worked on the farm doing chores, but after finishing 8th Grade, Leo decided Frank would not continue to high school because he needed him on the farm.

“I was the only one of the six that never went to high school,” said Frank. “I would have liked to go, but I accepted his decision. It wasn’t uncommon at the time for farm boys to stay home and help farm.

“My older siblings graduated high school and found other employment. My younger brother and sister went on to college.”

Thankfully, 4-H helped fill the gap of not going to high school. Frank enjoyed attending the weekly meetings with his friends and showing his animals at the county fair.

Frank remained home to help his father with the farm until 1951 when he married Mary Ann Bohn. The 22-year-old and his new wife rented the farm on shares from his parents for six years.

They lived in the farmhouse where he was born and raised their five children. Several years later, they purchased the farm from his parents.

“We later installed a bathroom and a hot water heater in the house,” he said. “Before that, we used an outdoor toilet. There was no furnace. We heated the house with a wood stove in one half and an oil burner in the other half.”

In the 1970s, Frank gradually increased the number of cows in his herd to about 110. He built a free-stall barn and milking parlor. He improved the farmland by tilling wetlands, removing brush, and stone fences, and putting in contour strips.

“Also, as land became available, we bought more land,” he said. “We also rented neighboring farmland to be able to raise enough feed to feed our increased herd size. Most of the work was done by family members.

“My wife and the kids all helped on the farm as they were growing up. I did hire a teenage nephew and some neighbor kids part-time as needed.”

When Frank’s oldest son graduated high school, he enlisted in the military. Because he lived on a farm, he was not required to report to basic training until after the crops were harvested that fall.

“My two younger sons both farmed with me for a number of years after high school,” he said. “Eventually, my younger son took a job in a field he liked but continued to help on the farm.”

Unfortunately, in 1975, when she was just 47, Frank lost his beloved Mary Ann to cancer.

He was a widower for four years when he met Althea Vollmer Bremser at a support group for those who lost a spouse. She was raising her six children on her own.

“It took about a year before I asked her out on a date,” laughed Frank. “I was surprised when she said ‘yes.’ It took great courage for me to ask her out after not dating for so long.

“I never thought I would get married again. I didn’t think there would be a woman in the world who would want to be with someone who had milk cows twice a day for 365 days a year. I just didn’t think it would work.”

The two were married on July 18, 1980. She moved into the farmhouse, and they began their life together. It bothered Frank that Althea was living in the shadow of the life he lived he built with his late wife.

“The cabinets were half filled with my late wife’s things and I just didn’t think it was fair,” he said. “So, I built a home for her on my property, and we rented out the farmhouse that I lived in all my life.

“I drew up the plans with Althea’s approval. One of my nephews is a builder; he gave me a good deal and roughed out the house and put the roof on. We had some lumber on the farm from an ice storm we had that took down a bunch of high lines. I got a guy who sawed all the wood into the board and batten I used to side the house.”

With Frank and Althea doing much of the work themselves, which included digging the basement and laying the concrete block, the house was ready in about a year. The couple moved into the house in 1996 and are proud that they can fit 45 people in the living room and kitchen for parties and holidays.

“Of course, we have to step over the little ones,” Frank said laughing. “We have a lot of little ones. We have a blended family of 11 children, and we have 22 grandchildren and 16 great-grandchildren.

“I am lucky that only one of my family members, a granddaughter, lives out of state. The rest live now much more than an hour away.”

Throughout his adult life, Frank was a member and past president of the Washington County Farm Bureau. He was also active in both township and county governments.

Although Frank enjoyed everything about farming, he began to realize that milking over 100 dairy cows twice a day was becoming too demanding for him, especially, since his children were not interested in continuing in his footsteps.

“The farm work with only family labor required more than 12 hours a day on weekdays and six hours on Sundays, and I was getting older,” he admitted.

“My wife and sons and I decided we wanted a less demanding lifestyle, so we began downsizing the dairy herd. In March of 2001, we sold the last cows. We were no longer a dairy farm, so I no longer needed to employ help. My son, Fred farmed with me until we quit dairy farming.”

Interestingly, in 2001, when Frank stopped dairy farming only 2.5 percent of Wisconsin dairy farms had more than 100 dairy cows. In contrast to 2022, very few farms have fewer than 100 cows.

“The family farms are disappearing, and commercial farms have taken over,” Frank said. “So many people don’t want to spend the time it requires to care for the cows and milk them twice a day. The average person is not used to doing that much work.”

For the next 20 years, Frank continued crop farming the land on his own and raised corn, soybeans, wheat, and hay.

In 2021, Frank rented out his farmland and stopped renting the 120 acres of the neighboring parcels he had been using since 1966. He continued renting smaller parcels near his home but gave that up this year.

“It was becoming too much for me and I would have trouble finding someone to combine my crops. The machinery has changed, and it would be too expensive for me to purchase new equipment at this stage of my life,” he said.

Frank continues to stay active with a small garden bursting with cabbage, cucumbers, tomatoes, lettuce, and other produce. Althea enjoys canning and recently canned a large batch of bread and butter pickles.

“Althea broke her hip last year and now she walks with a cane, but she helps me in the garden and helps me mow our big lawn and does her own housework,” said Frank. “She pays all our bills and does the bookkeeping.”

Frank and Althea are members of Holy Trinity Catholic Church, where Frank was baptized. Only one other person has been a member longer than him.

The couple credits their strong Catholic faith for their great marriage.

“She must have had a good marriage the first time around to want to come into this setup,” said Frank. “And that’s God’s honest truth.”