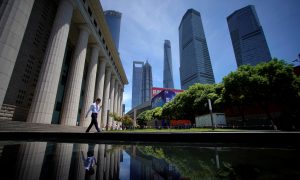 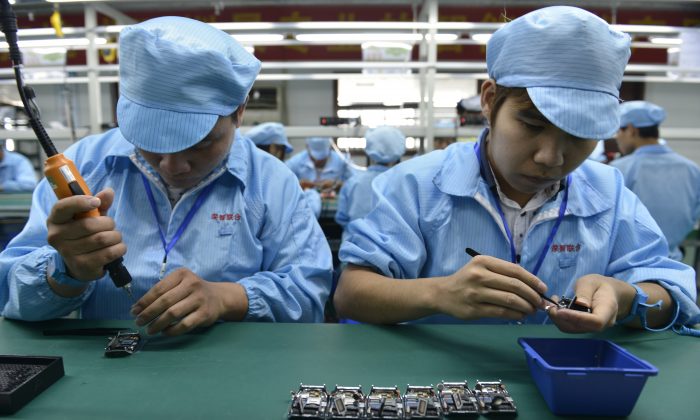 As Economy Spirals, Beijing to Boost Consumers and Infrastructure

August’s purchasing managers index (PMI) fell to a reading of 49.5, according to official metrics released on Aug. 31 from the National Bureau of Statistics. That’s 0.2 points below July’s reading and below the 50-point mark that delineates a contraction. A sub-index to PMI which measures export orders picked up slightly to 47.2, but still remained firmly in contraction territory.

The PMI, which measures factory activity, is a leading economic indicator that indicates future demand for goods.

Continued weakness in the manufacturing sector is a symptom of the ongoing trade war with the United States, and the slowdown has had a significant impact on China’s economic growth projections.

Given the depressed sentiment by manufacturers, Beijing recently rolled out new stimulus measures specifically to boost consumer and retail spending.

In keeping with Beijing’s long-term goals, the Chinese Communist Party is in the process of realigning China’s economic model to other developed markets by focusing on consumption and services.

As part of that effort, a policy document was rolled out to upgrade shopping malls, improve shopping areas, and encourage online retailers to collaborate more with factories.

The policy document, which is a wide-ranging wish list peppered with buzzwords, included mandates to develop “cloud computing” and “big data,” upgrade “traffic facilities” and “credit systems,” provide longer business hours to encourage night-time shopping, and help offline business entities “introduce new business philosophies, technologies, and designs” to take advantage of the digital economy, according to a statement from the State Council.

In another policy change, the State Council told local governments that have restrictions on auto sales to gradually relax or remove those curbs to encourage car purchases. This comes after China’s automobile industry suffered its 13th consecutive monthly decline in July. July auto sales fell by 4.3 percent, the China Association of Automobile Manufacturers said on Aug. 12.

“Our revenue has fallen more steeply than last year,” an employee at a Geely dealership in China’s southern Guangzhou province told the Nikkei Asian Review.

“It’s because the economy is bad.”

In addition to boosting consumer spending, Beijing is once again looking to build its way out of the economic doldrums.

China’s economy expanded 6.2 percent year on year in the second quarter, its slowest pace in nearly 30 years, according to official statistics. However, actual growth is likely a few percentage points lower. Michael Pettis, a professor of finance at Peking University’s Guanghua School of Management, believes the real GDP growth rate is below 3 percent.

“The irony is that the worse the trade war gets, the higher the official GDP growth will probably be. In order to show that China is not affected by the trade war, they will show high growth rates,” Pettis told Swiss financial magazine The Market earlier this year. “But you must understand that the published GDP growth numbers do not measure the real performance of the system.”

But the trade war and accompanying manufacturing activity decline and slow demand are only part of the story.

Beijing’s infrastructure spending had also declined in recent periods in an effort to rein in China’s debt burden. Infrastructure spending— government-mandated spending on roads, railways, and other real estate developments—was a key driver of economic and jobs growth over the past decade, but such spending has recently fallen to multi-year lows.

Historically, funding for infrastructure comes from issuance of local government bonds that were bought up by state-owned banks. But Beijing has in recent years reined in the amount of new debt issuance, especially at the local and regional level.

Leverage from the government sector crept up in the second quarter, driven by local governments issuing more bonds for infrastructure spending. Beijing recently lifted restrictions on construction financing, allowing local governments to use special-purpose bonds to fund projects. In addition, governments were encouraged to accelerate bond issuance by meeting the annual quota by the end of September, likely paving the way for additional quotas for the fourth quarter.