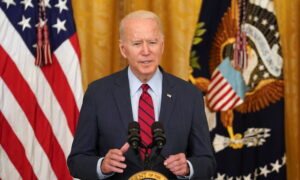 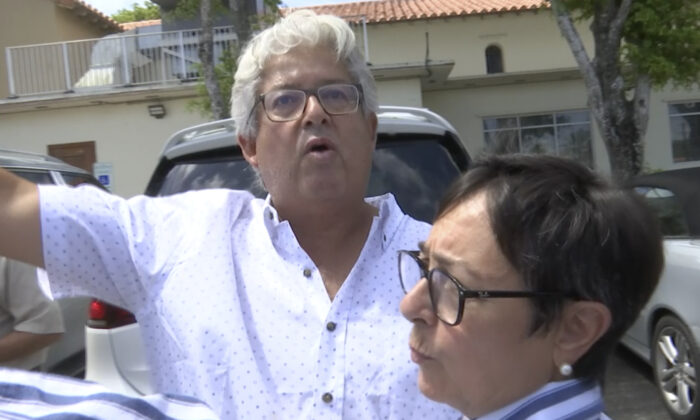 Alfredo Lopez talks about how his family escaped from the Champlain Towers South condo building in Surfside, Fla., on June 27, 2021. (Stacey Plaisance/AP Photo)
US News

As Condo Crashed Down, They Escaped Through Smoke and Ruin

FORT LAUDERDALE, Fla.—Alfredo Lopez and his wife Marian were asleep when the first thundering blast jolted them awake. Moments later, a second boom, much louder than the first, shook their bed on the sixth floor of their Miami apartment.

Alfredo rushed to wake his 24-year-old son Michael, urging him to get dressed, before running to the balcony window.

“All I could see was just white dust, very thick. I could barely see the balcony railing.”

The lights cut out and the emergency alarm came on, warning the residents of Champlain Towers South to evacuate.

The Lopez family—Alfredo is 61, his wife Marian, 67—lives on the street side of the condo that’s still partially intact, but when he opened the front door half of the building was gone. A jagged five-foot chunk of flooring barely left enough room to escape.

“There was no hallway, no ceiling, no apartments, no walls, nothing.”

“I was petrified. I really thought, ‘This is it. We are going to die’,” Alfredo Lopez said.

Sometimes, the line between life and death is as seemingly random as an ocean or street view, an odd or even unit. While 126 residents, mostly from the oceanside units, are among the missing nine days later, many others barely escaped. With the elevator collapsed, the survivors descended the cracked stairwell that had separated from the wall, along the way helping neighbors they met for the first time and others they’d known for years.

While their escape felt agonizingly long, it all unfolded in mere minutes. In those perilous seconds, before the world knew of the more than the 22 who perished and the many missing, they were fighting to survive.

“When I opened the staircase door and half the staircase was missing, at that point I know we’re racing against time to all get out as a family,” said Albert Aguero, who helped an 88-year-old stranger to safety.

On the first floor, recent college graduate Gabriel Nir had just finished a late-night workout and was in the kitchen cooking salmon.

The family heard the first thunderous rumble. They knew the building was undergoing construction and had been irritated by the incessant noise, but this felt different.

They rushed to the lobby. Outside, they noticed the car deck had caved into the parking garage. Car alarms were blaring, emergency lights were flashing and water was rapidly filling the garage where pipes had burst. Choking dust cloud was making it difficult to see. Residents from upstairs were running out the door screaming, many still in pajamas.

It was getting harder to breathe. The rumbling intensified, and Gabriel pushed his mom and sister into the street.

Tiny rocks and bits of debris pelted his head as he turned back to face the image that still haunts him.

“I saw the building turning into a white dust,” he says. “I heard people screaming.”

“I have to go back. I have to make sure everyone’s OK,” he said.

But he knew it was too late.

Up on the 11th floor, Aguero stared in disbelief at the gaping holes in the elevator shaft.

Half of the neighboring apartment was sheared off. The power was out.

There was little time to talk as they rushed into the stairwell, wondering if there was enough time to descend 11 painstaking floors.

“There was no time to react. Just make your move,” Aguero said.

Each time they descended another level, they yelled out the floor number, a small victory of survival, one floor closer to freedom.

On the ninth floor, Raysa Rodriguez and her neighbor Yadira Santos huddled in the hallway, along with Santos’ 10-year-old son Kai and their Maltese puppy. They’d already seen the other half of the building was gone and assumed the stairwells were, too.

She thought their only escape was to wait on a balcony until fire trucks arrived. In the chaos, her brother Fred called—he had rushed to the building and was standing outside. He kept repeating the same urgent warning.

“Get out of there, get out,” he pleaded.

They decided to try the stairwell again. When they reached the eighth floor, they found 84-year-old Ada Lopez waiting with her walker. Santos had called to warn her.

Rodriguez rushed ahead to see if there was a way out as the others helped the elderly Lopez down the stairwell, bumping into the Aguero family and Albert Lopez’s clan along the way.

But when Rodriguez reached the flooded parking garage, she turned around.

“I knew being electrocuted was a possibility,” Rodriguez feared.

They rushed back upstairs to the second floor where someone had left their apartment doors open. Outside from the balcony, they flagged down rescue teams outside and a cherry picker brought them to safety.

Days later, the Agueros, the Nir and Lopez family and their little ragtag team are all safe. They embrace their children and siblings tighter, knowing many of their neighbors will never return, never hug their loved ones again.

They have no homes. It’s all gone. Clothes, computers, cars, even prescriptions. It’s inconvenient, they say, but it doesn’t really matter. They are alive.

At night, they still hear the screams, and it all comes rushing back.

Gabriel Nir finds it difficult to sleep. He tries to stay busy, to push away the what-ifs.

“I wish I could have done more … these people that are missing, they aren’t coming back,” he says.