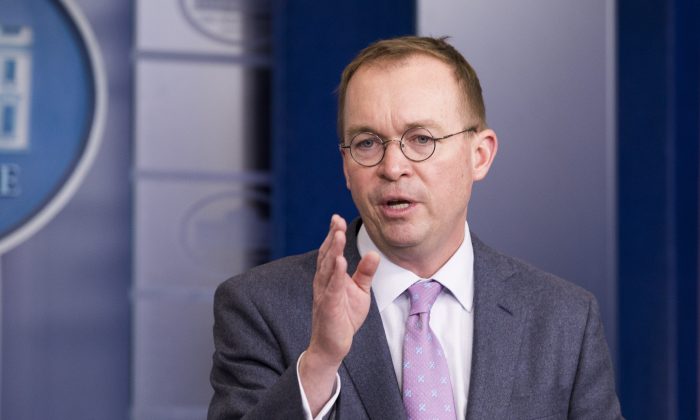 Mick Mulvaney, Director of the Office of Management and Budget at a White House press briefing in Washington on March 22, 2018. (Samira Bouaou/The Epoch Times)
Politics

WASHINGTON—Bargainers clashed Feb. 10 over whether to limit the number of migrants authorities can detain, tossing a new hurdle before negotiators hoping to strike a border security compromise for Congress to pass this coming week. The White House wouldn’t rule out a renewed partial government shutdown if an agreement isn’t reached.

With the Feb. 15 deadline approaching, the two sides remained separated by hundreds of millions of dollars over how much to spend to construct President Donald Trump’s promised border wall. But rising to the fore was a related dispute over curbing Customs and Immigration Enforcement, or ICE, the federal agency that Republicans see as an emblem of tough immigration policies and Democrats accuse of often going too far.

Acting White House chief of staff Mick Mulvaney, in appearances on NBC’s “Meet the Press” and “Fox News Sunday,” said “you absolutely cannot” eliminate the possibility of another shutdown if a deal is not reached over the wall and other border matters.

“The president is going to build the wall. That’s our attitude at this point,” Mulvaney said on Fox. “We’ll take as much money as you can give us, and we’ll go find the money somewhere else, legally, and build that wall on the southern border, with or without Congress.”

People involved in the talks say Democrats have proposed limiting the number of immigrants here illegally who are caught inside the United States—not at the border—that the agency can detain. Republicans say they don’t want that cap to apply to immigrants caught committing crimes, but Democrats do.