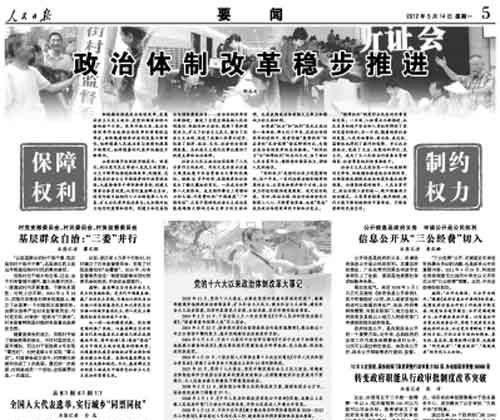 Immediately following a Sunday news report that Zhou Yongkang had handed over authority of China’s massive public security apparatus and was being investigated, the People’s Daily, in a rare move, dedicated an entire page in Monday’s paper to an article on “political reform.”

An exclusive Epoch Times report had previously revealed that Premier Wen Jiabao declared war on Zhou Yongkang during a meeting of the Politburo. The Daily’s article seems to confirm that Zhou Yongkang has lost power.

According to a Sunday story from Britain’s “Financial Times” from Beijing, operational control of the regime’s massive public security apparatus was taken from Zhou Yongkang and given to Meng Jianzhu, the current minister of public security.

The report also stated that Zhou Yongkang was “forced to make a ‘confession’ to his colleagues on the standing committee” regarding Bo Xilai’s case.

The May 14 article in the People’s Daily was rife with slogans like “protect rights” and “restrain power.”

The article directly stated, “To actively and prudently promote political reform and to develop socialist democratic politics are the enduring and striving goal of the Party and the country.”

Restraining power and protecting rights ensure that people are the masters while enhancing the vitality of the party and mobilizing the “enthusiasm of the people,” read the article.

The article also suggested “self-government by the grass-roots masses” through the concept of “Three Committees in parallel.”

The Three Committees Authority, is composed of the supervisory committee of village affairs through election, the village Party branch, and the village committee.

In other words, levels of authority would help the people of China realize greater political autonomy.

The Epoch Times reported that Hu Jintao insisted in a meeting that an investigation against Zhou Yongkang would be necessary, and agreed that the investigation would be “fair,” but “secret.” This method of dealing with Zhou is known as “slowly boiling a frog.” The Epoch Times has been reporting Zhou’s expected fall for weeks.

Those predictions began when Wang Lijun sought asylum in February at the U.S. consulate in Chengdu. Wang’s attempted defection ensured the fall of his boss, former Party Secretary of Chongqing Bo Xilai and Bo’s protector Zhou Yongkang. Wang is believed to have revealed Bo and Zhou’s plan for coup to take down China’s expected next leader Xi Jinping and seize power within two years. Bo fell within weeks of the incident and is now under investigation.

Wang Lijuan’s dramatic defection attempt triggered rumors mainly from within the Communist Party that authorities were laying the groundwork for dealing with Zhou Yongkang.

On May 11, The Epoch Times exclusively reported on the showdown between Wen Jiabao and Zhou Yongkang during a Poliburo meeting. In the presence of Chinese Communist veterans, Premier Wen called for an investigation on Zhou Yongkang. When Zhou Yongkang responded by insisting that Wen Jiabao’s wife, Zhang Peili also be investigated, Wen Jiabao replied, “An investigation will not be a problem. If my family or I were involved in any embezzlement, I would immediately resign!”

Since then, Zhou Yongkang and Zeng Qinghong, the head of the National People’s Congress as well as Jiang Zemin’s close ally, have quieted down.