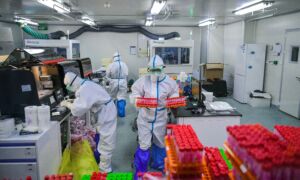 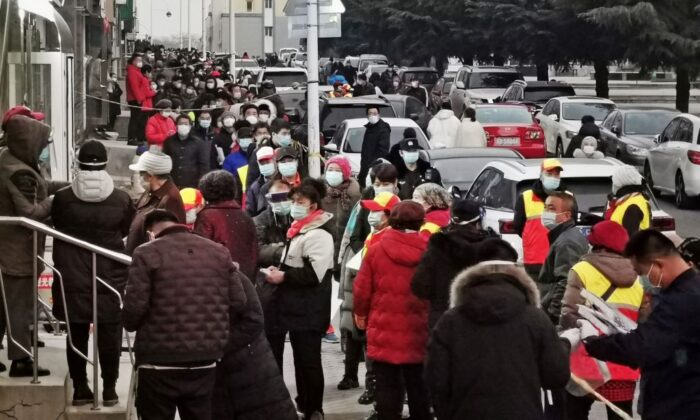 Residents wait to be tested for the novel coronavirus as the city carries out a mass testing program in Dalian, a city located in northeastern China's Liaoning province on Dec. 22, 2020. (STR/AFP via Getty Images)
Chinese Regime

As more cases of COVID-19 are being discovered in Beijing and parts of northeastern China, prompting lockdowns, some college students in the city of Dalian are complaining that they are being prohibited from leaving campus.

Meanwhile, the Beijing city government ordered on Dec. 25 that residents couldn’t leave the city except in an emergency.

Local health authorities were scrambling to trace the steps of a man surnamed Fu who authorities previously had said contracted COVID-19 while he was in Beijing, and had tested positive upon arriving in Ningbo city and quarantining on Dec. 23. Efforts in Beijing and Ningbo focused on quarantining those he came into contact with, including 260 people in Ningbo who were identified as his close contacts.

Dalian, a port city located in Liaoning Province, witnessed a surge of infection cases in recent days. On Dec. 21, municipal authorities announced that local health facilities should be placed under a “warlike state” to stem the spread of COVID-19, as the city has continued to find new locally transmitted cases since Dec. 15.

On Dec. 22, Dalian authorities launched testing for all city residents.

Shenyang, another city in Liaoning that’s about a four-hour drive from Dalian, was placed under a “wartime” state on Dec. 23. That day, municipal health officials issued a document, asking regional authorities to “strictly control” people leaving residential areas during the New Year holiday period and the Lunar New Year in February.

Dalian health officials also enacted strict measures for college students. According to a letter sent by Dalian Maritime University to all students and teachers on Dec. 26, all college students in Dalian are forbidden from leaving the city until the local outbreak ends, and all local colleges are asked to do “seal-off management.” The letter was posted on the school’s Weixin social media account.

The Dalian Maritime University on Dec. 27 published another letter on Weixin addressed to students’ parents, explaining that because the local outbreak remains “severe,” preventing students from leaving the school is necessary to reduce people’s movements.

A student at the Dalian Maritime University who declined to give his name told the Chinese-language Epoch Times that he canceled his flight home because students weren’t allowed to leave campus.

He said he didn’t think school officials would listen to students’ concerns about the new quarantine policy, although he expressed hope that the local outbreak would soon be over, so that they could go home to enjoy the New Year holiday with their families.

A student named Li Ling (a pseudonym) at the Dalian University of Technology said that school officials hadn’t kept their promises to students about how the COVID-19 outbreak would be handled.

For instance, Li said students lined up at school to get tested for the disease on Dec. 26 because they were told that students could go home on Dec. 28 if their test results came back negative. However, after about two hours, the testing was called off by local government officials.

Li said that she didn’t know when they would be able to go home and expressed concern that students would have to pay for canceled bus or flight tickets that they had booked to return home.

According to Li, there were shouts of “I want to go home” from windows of the school dormitory late on Dec. 24.

She questioned why schools decided to keep students on campus, as they could easily report their whereabouts if they were to leave.

“I believe if the Dalian government continues to insist on not allowing students to leave, students could become restless. They could even join together to resist,” Li said.

On Dec. 26, the Shunyi district of Beijing was placed under “warlike mode” after authorities confirmed two new locally transmitted cases, according to Chinese state-run media. The cases prompted authorities to mandate testing for 800,000 locals in the district. As of midnight on Dec. 26, Chinese state-run media Xinhua reported that about 120,000 people had been tested.

About 2,000 people who live in the Lianzhu Garden residential compound in the Shunyi district were told that they couldn’t leave the premises, according to state-run Health Times. Fu, the man who tested positive for COVID-19 after traveling to Ningbo, had lived in the same compound.

Meanwhile, workers at the Aobei Science Park in Beijing’s Haidian district, where Fu worked, discovered on Dec. 23 that they were barred from leaving their workplace. People complained on Chinese social media Weibo that all workers were asked to take nucleic acid tests for COVID-19, and could be quarantined inside for a long time.