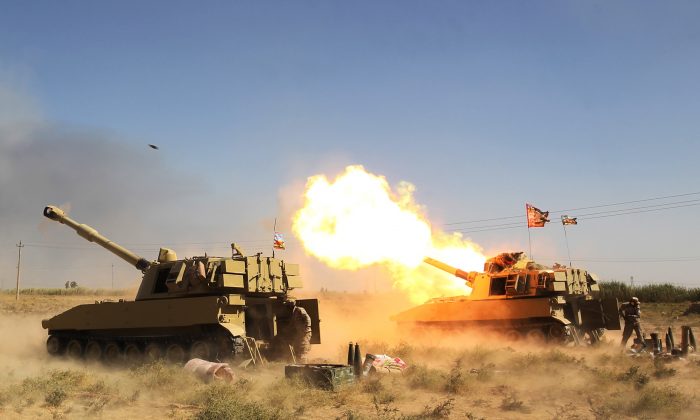 Iraqi forces, backed by the Hashed al-Shaabi (Popular Mobilisation units), fire artillery from a position near the ISIS group's stronghold of Hawija, during an operation to recapture the town from the jihadists on Oct. 4, 2017. (Ahmad Al-Rubaye/AFP/Getty Images)
Chinese Regime

As China Increases Arms Exports, More Weapons End up in the Hands of Terrorists and Dictators

Despite the country’s burgeoning military budget, China has not fought a war since 1979. But that hasn’t stopped Chinese weapons from seeing extensive use in conflict zones across multiple continents—and in the hands of the world’s most notorious terrorists and dictatorships.

A recent report compiling three years of research has indicated that as the United States, Russia, and other countries battle the ISIS terrorist group, the biggest proportion of their arsenal originates in Chinese weapons factories. Fully 43 percent of arms captured from ISIS were Chinese-made, compared to 1.8 percent of American origin.

The report, published by the UK-based Conflict Armament Research, said that its findings “mirror broad trends in the global market for Warsaw Pact-calibre materiel. China predominates as a producer.”

China, still one of the world’s weapons importers, is fighting to get a bigger share of the export market. According to a report by the Stockholm International Peace Research Institute (SIPRI), Chinese armament sales went from 3.8 percent of the global total to 6.2 percent between 2011 and 2016, overtaking France as the third-largest weapons exporter.

Russia and the United States still predominate in overall military exports, accounting for over half of the world’s total. But where the two perennial rivals mostly supply their respective allies and client states, Beijing supplies anyone willing to pay.

For decades, Chinese armaments have been based heavily on if not directly copied from Soviet or Russian hardware. And while Chinese designs have made great improvements in recent years, they are far from being serious competitors to Russian or Western equipment.

China’s clients thus tend to be either nations unable to afford Russian or U.S. prices, or groups and regimes that are otherwise subject to international sanctions, a phenomenon that could explain the large proportion of Chinese-made weapons in ISIS hands.

Last year, the Chinese regime donated around $300 million worth of police weapons to the Philippines, where thousands of people have been summarily executed ostensibly as part of president Rodrigo Duterte’s war on drugs. Beijing has also been supplying Venezuela with anti-riot equipment to help suppress dissent caused by the South American nation’s failed attempts at autarkic socialism. Scattered reports even suggest that North Korea’s military modernizations and its ballistic missile program has received assistance from factions in the Chinese Communist Party (CCP) despite China’s officially cooling relations with Pyongyang.

China has had a history of providing cheap weaponry to any and all regimes. In 1993, the government of Rwanda purchased enough machetes from China to arm a third of the male population; the next year, over 800,000 people, mostly of the Tutsi ethnicity, were murdered over the course of about 100 days in the infamous Rwandan Genocide.

From 1975 to 1979, the communist Khmer Rouge regime in Cambodia killed or starved to death a quarter of the country’s population. The Khmer Rouge received extensive technical and material aid from China, despite the fact that 200,000 Chinese-Cambodians were murdered.

In 1979, Vietnamese forces attacked and toppled the Khmer Rouge. In response, China launched a short-lived invasion of Vietnam, also a communist state but in the Soviet Union’s ideological camp, to punish it for bringing down Beijing’s ally.

In November 2015, an insider who worked as a general engineer in a Chinese state-run defense firm gave an interview with the overseas Chinese-language radio broadcaster Sound of Hope, describing how a combination of corruption and support from the CCP facilitated illicit weapons deals between Chinese suppliers and foreign rebel groups.

“Take for example Somalia; the CCP has an embassy there,” the insider, whose identity was not disclosed for safety reasons, said. “They know which forces are the government’s and which are the rebels and do business with the bosses. When the bosses need something, the embassy finds out and reports the matter to the Ministry of Foreign Affairs, which tells the Ministry of Defense, which in turn contacts the export companies.”

The way the equipment is delivered depends on the client. In the case of Somali rebels or pirates, the Chinese party will opt for a transaction at sea. The Chinese navy’s southern fleet will dispatch ships to transport the goods, because “the Southern Fleet can use this as a means of expanding its influence in the South China Sea as well as the Indo-Pacific oceans, and also because international waters are a convenient location for making the trade.”

The insider also described how Chinese firms would ship arms across the Chinese border into Afghanistan to be sold to militants. The Chinese border sentries would be given orders in advance from higher Party authorities to let the shipments through.

Money made in these transactions is remitted to offshore bank accounts controlled by Chinese military officers. “This money does not go to the [Chinese] military region’s accounts,” the insider said, “but will be stored by the export company CEO in, say, an account with HSBC. Only a few generals know where the money went.”