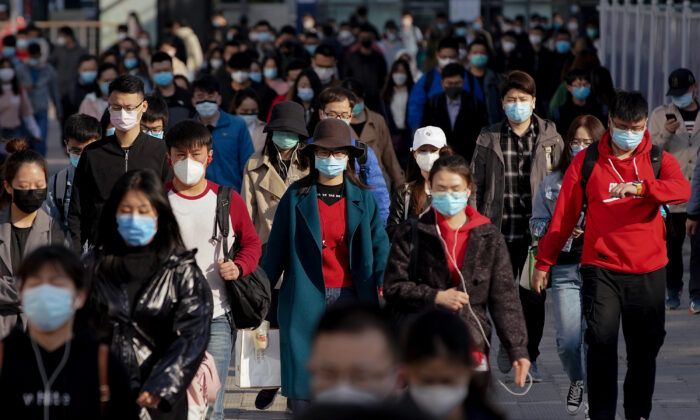 By Cathy He and Nicole Hao
Print

Fears of a second wave of CCP virus infections in China are mounting as several areas recently reimplemented lockdowns in response to localized clusters.

Since April, a county in central China’s Henan Province, cities in the northernmost province of Heilongjiang, and parts of the southern Chinese city of Guangzhou have been placed under lockdown—weeks after restrictions were lifted across much of the country.

Meanwhile, rising numbers of asymptomatic carriers—those infected who do not show symptoms of the COVID-19 disease—have fueled concerns of a second wave of infections.

“They will get a second wave, most likely,” Dr. Aimee Ferraro, infectious diseases researcher and senior core faculty member for Walden University’s Master of Public Health program, told The Epoch Times. “And it will be from asymptomatic cases or imported cases from outside.”

Ferraro said that a second wave could see an exponential growth in infections, just like during the initial outbreak.

While the country’s chief epidemiologist Wu Zunyou has said such cases accounted for 4.4 percent of total confirmed patients, classified Chinese government data showed that asymptomatic carriers could form up to one-third of those who test positive, the South China Morning Post reported.

The data showed that more than 43,000 patients who tested positive in China by the end of February were asymptomatic. These patients were placed in quarantine and monitored, the outlet reported.

Ferraro said that the lack of widespread testing in China, which would have detected more cases of asymptomatic carriers, meant there was likely “a ghost system of disease spread” in the community.

“They’re [Chinese authorities] either aware of it and not telling others because of the political implications, or they just don’t have the resources to do it [widespread testing],” she said.

For weeks, the Chinese regime has reported few new domestic infections, claiming that the bulk of new cases are from returnees who were infected overseas.

But interviews with Chinese citizens and internal reports obtained by The Epoch Times have revealed that local authorities frequently underreport cases.

For instance, a dataset from Wuhan health authorities showed that the city tested 16,000 patient samples on March 14, with 373 showing up positive. But authorities only publicly recorded four infections for that day.

In China’s northernmost province of Heilongjiang, authorities locked down the city of Suifenhe, which borders Russia, on April 7, which officials said was part of an attempt to stem the spread of imported cases from Russia.

From March 27 to April 9, the city recorded more than 100 imported cases, as well as 148 asymptomatic patients that were imported cases. Only three new domestic infections were reported during that period.

However, data from the provincial health commission cast doubt on the low numbers of domestic infections.

The commission on April 9 announced that 1,051 people in the province went to hospitals presenting symptoms of fever on the previous day. But on April 8, the province reported only 40 new infections, which were all imported cases. It also said 878 people were admitted to hospitals due to fever on April 7, but on that day only 25 new infections were recorded, all of whom were imported cases.

Meanwhile, a makeshift hospital was built in Suifenhe on April 11, with 600-bed capacity.

The provincial health commission is also preparing to make available nearly 4,000 beds elsewhere in the province, according to an internal document seen by The Epoch Times.

Suifenhe and Harbin, the capital of Heilongjiang, will now require all arrivals from abroad to undergo 28 days of quarantine, as well as nucleic acid and antibody tests.

Harbin added that it would lock down any residential units where confirmed and asymptomatic virus cases are found for 14 days.

In Jiamusi, another city in Heilongjiang, residents recently told the Chinese-language edition of The Epoch Times that many residential compounds in Xiangyang district of the city were placed under lockdown again on April 2, after measures were lifted on March 12. Although local authorities did not provide a reason for the change in policy, residents believed it was due to new infections.

In the nearby region of Inner Mongolia, the city of Manzhouli, located along the border with Russia, said authorities were preparing a new hospital to treat virus patients, with construction to be completed on Tuesday.

Meanwhile, the southern city of Guangzhou, home to a large immigrant community from countries in Africa, has seen an uptick of new infections among African nationals in recent weeks.

Authorities in Guangzhou city have ordered bars and restaurants not to serve clients who appear to be of African origin, the U.S. consulate in Guangzhou said in a statement on April 12.

Moreover, anyone with “African contacts” faces mandatory virus tests followed by quarantine, regardless of recent travel history or previous isolation.

The U.S. consulate recommended that “African-Americans or those who believe Chinese officials may suspect them of having contact with nationals of African countries to avoid the Guangzhou metropolitan area until further notice.”

Many Africans have been evicted from their homes by landlords and left with nowhere to stay, videos shared on social media revealed.

Mr. Zhou, a resident from Yaotai village, Yuexiu district in Guangzhou, told the Chinese-language Epoch Times on April 7: “Our village has been locked down again since two days ago. All stores except supermarkets were closed. We need to pass a body temperature screening when we leave or enter our village… Police who patrol on the streets arrest African people when they see them.”

Zhou said the village was placed under lockdown in late January. The quarantine measures were lifted in early March.