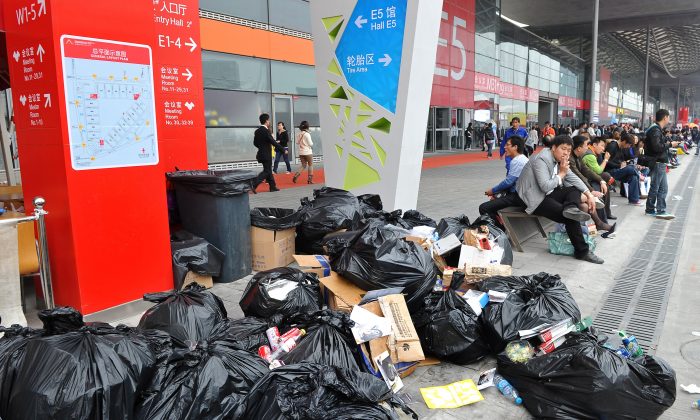 Back in July last year, China announced it would ban the import of foreign solid waste products, including plastics, paper, and textiles. The country was the world’s biggest importer of recyclable materials, which its manufacturing industry reuses.

In 2016, China imported more than 7.3 million tons of plastics. Countries in the European Union export about 40 percent of their discarded plastics to China. Meanwhile, the United States exports about one-sixth of its recyclables to China, according to an NPR report.

The news of China’s ban had countries reeling over how their domestic waste facilities could handle the capacity without its help.

Chinese media reported that beginning on Jan. 1, as promised, the country has put its trash ban into effect.

Before the recent ban went into effect, smuggling foreign garbage was a big business in China.

But did you know China has its own trash-handling problem?

China’s big cities are currently at capacity, with some choosing to alleviate the problem by dumping their trash into surrounding small towns and cities.

This was recently brought to light by a court case in which three people were sentenced to prison for illegally dumping trash from Shanghai into a scenic area about a two-hour drive away, on Xishan Island. The island is located on Lake Tai.

The three arranged for boats to ship trash from Shanghai to a drug rehabilitation center on Xishan Island, where they were contracted to do green, environment-friendly projects, according to the local court that upheld their original sentence on Dec. 29 after the defendants appealed.

Two were charged with polluting the environment and the other with fraud, with penalty fees and sentences between 4.5 to 5.5 years.

Their scheme was only discovered when, in June 2016, Suzhou locals noticed boats, loaded with garbage and emitting an offensive odor, that would come out at night. After locals uploaded information onto social media and brought attention to the issue, Suzhou police began investigating and said the boats came from Jiading District in Shanghai.

In other small cities within Jiangsu Province, such as Nantong and Wuxi, Chinese media have also reported cases of people illegally dumping trash from Shanghai.

Shanghai has been overwhelmed with trash for several years now. The Chinese regime’s mouthpiece newspaper People’s Daily reported in 2013 that Shanghai generates 20,000 tons of refuse daily. Every 16 days, the amount of trash, if stacked, would be as tall as the 1,380-foot iconic Jin Mao skyscraper in downtown Shanghai. Many big and medium-size cities are also at capacity: Beijing produces 18,400 tons daily, while Guangzhou in southern China produces 18,000 tons.

Shipping trash to dispose of it elsewhere has become a profitable black market operation, the Chinese regime’s mouthpiece agency Xinhua noted in 2016. At every level of the supply chain, a lot of money is earned. Xinhua interviewed a ship owner in charge of transporting the waste cargo, who said he earned 2,000 yuan ($308) per shipment. A middleman earned 30 yuan ($4.60) per ton.

Chinese newspaper China Construction Daily reported in 2014 that two-thirds of Chinese cities are overwhelmed with garbage. Their cumulative total would cover 500 million square meters (5.38 billion square feet), while the pile continues to grow at a rate of 8 to 10 percent annually.

Before the recent ban went into effect, smuggling foreign garbage was a big business in China. The U.S.-based environmental group Basel Action Network (BAN) uncovered that much of the electronic waste from the United States continues to end up in China, mostly in a rural northern area of Hong Kong called the New Territories.

BAN’s investigators placed GPS trackers on e-waste and found hundreds of junkyards where workers smashed the electronics by hand, “exposing workers to dangerous mercury-laden dust, vapors, and hazardous toners,” according to its most recent e-waste report. Under the Basel Convention, an international treaty, it is illegal for developing countries to import hazardous e-waste from the United States.

Whether this illegal importing of trash will continue or not under the ban remains to be seen. But Epoch Times China current affairs commentator Yan Dan wrote in a recent article that given how much environmental destruction the Chinese regime has already committed, it is hard for the Chinese public to believe that one policy can reverse the course.

He also pointed out that in order for the trash smuggling to have happened in the first place, the Chinese authorities must have turned a blind eye and tacitly allowed it.

Li Xin’an and Wang Jianyu contributed to this report.