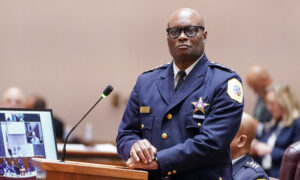 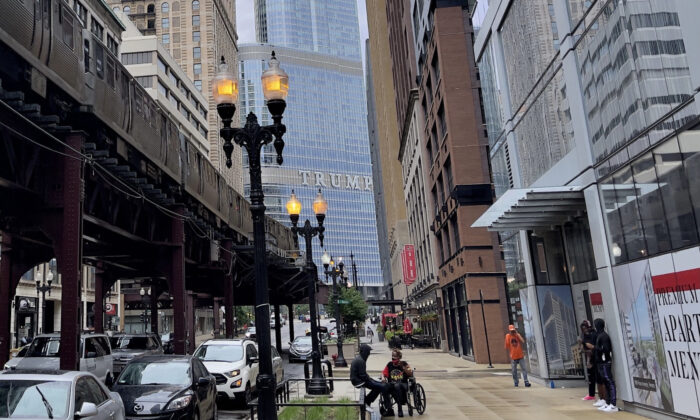 In downtown Chicago a train rides on the Loop, the elevated rail that forms the Chicago "L" system, on June 30, 2021. (Daniel Slim/AFP via Getty Images)
Illinois

CHICAGO—Chicago’s downtown is rebounding from the pains of the pandemic. Restaurants and bars are open, residents are dining out, tourists and shoppers are back, and the real estate market is climbing back.

But one pandemic pain lingers around—crime. In some pockets of downtown, it’s worse.

In the central police district, which covers the center and south of downtown, shooting incidents jumped sevenfold in the past 28 days from the same time last year; in the police district that covers the north of downtown, shooting incidents jumped fourfold. In both districts, criminal sexual assault and motor vehicle theft (many are violent carjackings) stand at a five-year high, the length of the publicized police crime data.

These random violent crimes used to be daily realities for certain enclaves on the South and West Side, but now they have crept into the heart of the city—downtown.

The Epoch Times recently spoke to a dozen downtown residents and business owners. Many have noticed an uptick in violent crimes in their neighborhoods. Some are adjusting their lifestyles for self-protection, some are thinking of moving out of the city altogether, and some are determined to take their community back by organizing a neighborhood watch group.

Kristen Donaldson’s fiancé witnessed a violent carjacking in the Gold Coast neighborhood on June 18. He was walking their dog in front of their apartment building at around 10:30 p.m. when an offender approached and shot a man in the neck and then fled in a car. His fiancé raced upstairs and called 911.

“It’s the first time we’ve witnessed something like this,” Donaldson told The Epoch Times. “We typically feel safe taking our dog out here, but now we are a little more alert.”

Gold Coast sits north of Loop, the heart of downtown Chicago. The residents are mostly single professionals with a median household income of about $99,700 (pdf), nearly two times the city average.

The neighborhood is part of the 18th police district, which has seen a 70 percent (pdf) increase in car theft in June compared to the same time last year. There were 16 shooting incidents this year, the highest the neighborhood has seen in five years.

Donaldson plans to move out of Gold Coast when her lease expires in a few months. Having lived downtown for six years, she plans to move further north, and she said safety was a factor in that decision.

Jim Wales, a resident and a real estate agent in South Loop, is also concerned about emerging crime in his neighborhood. The neighborhood nestles south of Loop with a median household income of more than $100,000.

Both South Loop and Loop belong to the 1st police district, which has seen shooting incidents double to 22 this year compared to the same period in 2020 (pdf). Criminal sexual assaults have increased by 42 percent and car theft by 57 percent since last year, and both are at the highest levels in five years.

“Just the randomness and the violent nature of the crimes, I don’t think I’ve seen it in my neighborhood before,” Wales told The Epoch Times. “Right now, people are afraid.”

On an early Sunday morning weeks ago, a stray bullet hit the second-floor window of a South Loop townhouse while three kids were sleeping on the third floor, according to a long-time South Loop resident. She showed The Epoch Times a picture of the broken window and a Facebook message from the townhouse owner.

“There has never been a stray bullet hitting a townhouse in our neighborhood. It seems anything could happen at any time. It is totally out of control,” she told The Epoch Times. She declined to disclose her name for fear of repercussion.

Some of her neighbors are thinking of moving to Indiana. One is considering Colorado.

She used to let her teenage daughter hang out with friends at Gold Coast designer stores during summer nights, but not anymore. She’s worried about a growing demographic with problematic behaviors at these stores, who normally couldn’t afford shopping there but are now able to do so, probably due to the stimulus checks, she said.

“It would be beautiful to diversify. We are all for diversity, which is why we live in a city and raise our children here,” she said. “But unfortunately, some of them are not peaceful, and they bring violence over here.”

Patricia, who declined to disclose her last name, echoed the sentiment. She stopped going to some designer stores she used to frequent on the Magnificent Mile, an upscale shopping district north of Loop.

“The Magnificent Mile is not magnificent now. There is an element that was never there before,” she said. “All the boarded-up stores, and the masses of people that are intimidating on certain streets at certain times.”

Her stylist in Gold Coast has lost suburban clients who don’t want to park downtown for fear of being carjacked. Patricia plans to stay out of Chicago, too, as soon as she can sell her high-rise condo in the Lincoln Park neighborhood on the North Side of the city.

“I don’t know where Chicago is headed. I think we have some big problems here,” she said.

“I don’t think the police are allowed to do their jobs as they are supposed to do, and a lot of criminals know that. They kind of tell the police, ‘Stand down.’ That is what I have been told,” Patricia said.

Beginning in June, the Chicago Police Department (CPD) began pulling back downtown deployment, which started in August 2020 following lootings and social unrest. Throughout the summer, CPD deployment will be focused on the 15 most violent neighborhoods on the South and West Side.

Ming Sison, a floral designer who has lived in downtown Chicago for 45 years, hopes there will be more police officers guarding downtown.

“There are not enough police right now. I think they should have more police during early mornings and late evenings because that’s where the crime happens,” Sison told The Epoch Times.

Alfredo Fricano, an 82-year-old barber who has been cutting hair for Gold Coast residents since 1958, thinks the problem lies in Cook County State’s Attorney Kim Foxx.

“It is not the cops’ fault. It is the state attorney’s fault,” Fricano said. “When people commit the crime, there is no punishment. What are they going to do next?”

A Chicago Tribune analysis found that Foxx had dropped more felony cases in her first three years than her predecessor Anita Alverez’s last three years in office. She dropped charges against nearly 30 percent of felony defendants, including people accused of murder, shooting another person, sex crimes, and attacks on police officers.

Another business owner in South Loop agrees about Foxx’s lax prosecution. He declined to disclose his name for fear of repercussion to his business.

He said that officers patrolling his block told him that they confiscate 1 to 3 guns in the neighborhood every day. Most of the offenders are from outside South Loop, such as teenage gang members from the South Side.

“Their gang bosses sent them out to do crimes as juveniles, and no charges will be filed against them,” he said. “There is no repercussion. They come in and go out. It’s just a revolving door.”

Jim Wales, a South Loop resident who worked in law enforcement for 30 years before retirement, is organizing the first formal neighborhood watch group downtown to deter the rising crime.

“We are really encouraging people to be the eyes and ears for the police. If you see suspicious behavior, call the police and let them know,” Wales told The Epoch Times.

The group will also challenge the CPD to do a better job, he said. For example, they can push the CPD to more quickly release descriptions of violent offenders.

About 120 people appeared in person and another 300 people registered online for the first neighborhood watch meeting Wales organized in June. Many neighbors showed support for the idea, but some preferred to let police do the crime-fighting job, and a few even called Wales a racist, he said.

Wales said they will not use racial profiling in identifying suspicious persons. “When I talk about suspicious person or behavior, I mean cars driving down the street slowly at 2 o’clock in the morning with lights off, a guy walking from porch to porch and he doesn’t appear to be a delivery guy, or someone trying to force their way into your neighbor’s house and you know he is not your neighbor.”

The neighborhood watch group will be affiliated with the National Neighborhood Watch Program. Group members will receive formal training and maintain a formal communication channel with the CPD. All members are volunteers.

Like many empty-nesters, Wales moved from a Chicago suburb to downtown with his wife after their youngest child graduated from college. He enjoys the convenience and richness of city life and will do his part to bring his community back, he said.

“It’s like natural fires or control burns at a national park. After the fire, the vegetations come back even stronger. I think that is what’s going to happen in downtown. We have had our control burn, and now we are going to come back and take part in, and we will come back stronger.”