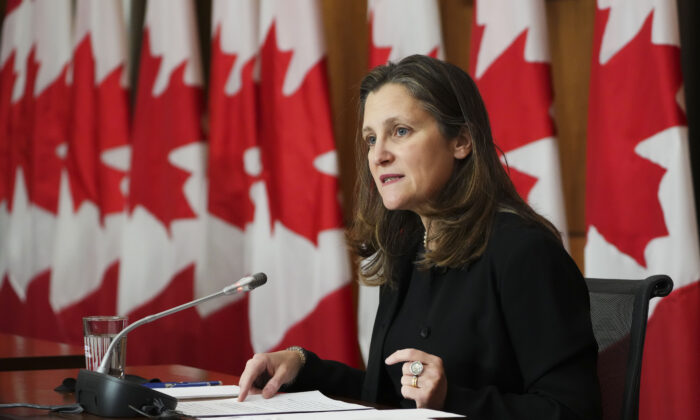 As Canada Threatens Retaliation Over US Lumber Tariffs, Some Urge Caution

Ottawa says it’s prepared to retaliate against Washington’s decision to raise tariffs on softwood lumber, but some say that approach may not be to Canada’s advantage.

In the latest round of tariff disputes, the U.S. Department of Commerce on Nov. 24 announced a whopping increase in duties on Canadian softwood lumber imports from 9 percent to 18 percent for most mills.

The next day, International Trade Minister Mary Ng issued a statement condemning the increase, while Deputy Prime Minister Chrystia Freeland said Canada will impose tariffs if it needs to.

The U.S. side argues the Canadian industry benefits from government subsidies in the form of below-market fees for harvesting on public instead of private lands.

Last year, the Trump administration planned to slap a 10 percent tariff on Canadian aluminum citing national security grounds, but after Canada threatened to retaliate with $3.6 billion in countermeasures, the administration backed off.

But a retaliatory tariff this time around may be unwise, says Geoffrey Hale, a political science professor at the University of Lethbridge.

“Canada has to be reasonably measured in the approaches that it takes,” Hale told The Epoch Times, noting that “we are far more dependent on the Americans than they are on us.”

Hale says the Biden administration seems to abide by treaties it is subject to, and so the process should be followed, however gruelling.

“Where the Biden administration is observing legal formalities, Canada has to go through the glacial process of pursuing USMCA [free trade deal] dispute resolution to deal with the softwood lumber issue,” he says. If Canada ignores the rules, “we license [the United States] to disregard the rules further to our significant potential disadvantage.”

“Protectionism is a lose-lose policy,” the institute said on social media.

In Parliament on Nov. 25, Freeland was pressed on the issue by the opposition, which accused the government of having a poor relationship with the Biden administration.

“We will … make it very, very clear that Canada is prepared to retaliate to defend national interests. We have done it before. We will do it again if we have to,” she said.

Conservative MP and foreign affairs critic Michael Chong said Prime Minister Justin Trudeau had “committed to a renewed relationship with the Biden administration. Instead, we got electric vehicle tax credits that threaten our auto jobs, stringent buy American policies, measures targeting our dairy farmers, actions against pipelines that have contributed to skyrocketing energy prices and now a doubling of softwood lumber tariffs.”

“it is clear that Canada’s standing in Washington has declined,” he said.

Patrick Tyrrell, research co-ordinator at the Washington-based think tank Heritage Foundation, told The Epoch Times that based on precedent, Canada could very well carry through with its threat of retaliation.

“Canada has retaliated with dollar-for-dollar countermeasures in the past, such as by slapping tariffs on American steel, aluminum, whiskey, and lots of other items in response to double-digit tariffs on Canadian products by the U.S.,” Tyrrell said.

Tariffs on Top of Inflation Woes

Tyrrell decries the U.S. tariffs hike at a time when inflation is at a 31-year high and the cost of living is rapidly increasing in both countries.

“Doubling the tax on Canadian softwood lumber could not come at a worse time for new homebuyers and other users of lumber in the U.S.,” he says.

Both Hale and Tyrrell doubt the rising cost in housing the tariffs will cause is sufficient to discourage Washington from going ahead with its plan.

“I don’t know if the Biden administration will feel pressure to remove the tariffs,” Tyrell says. “It depends if they mean what they say about taking the problem of inflation hurting Americans every time they go to the store seriously or not.”

Hale says since the Federal Reserve “is not raising interest rates aggressively because of the size of the U.S. debt, I would say the cost of housing in the United States is a relatively small consideration in the great scheme of things.”

In light of this and other domestic challenges, solving a lumber dispute with Canada could be a low priority, Hale says.

“Given the Biden administration’s overloaded agenda, given the fact that the president is playing defence on the issues that are most important to him, Canada does not rise that high on the radar.”