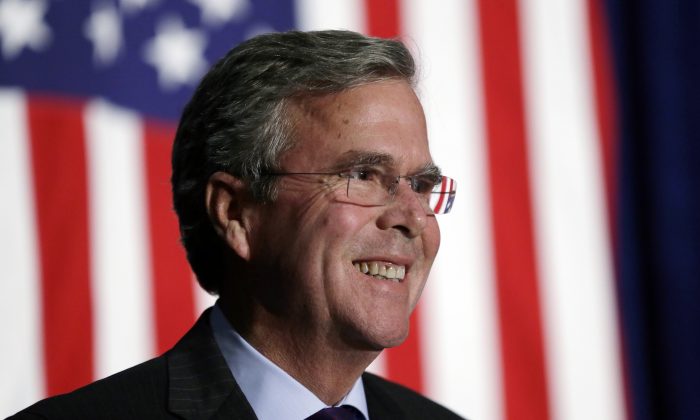 As Bush Campaigns, Florida Struggles With His Schools Legacy

TALLAHASSEE, Fla.— Jeb Bush’s signature achievement in education policy as Florida governor may be at risk of coming apart.

A champion of what became known as Common Core education standards, Bush pushed a set of high-stakes tests for students and a system of grading schools as the centerpiece of an education agenda that defines much of his legacy in office.

In the Republican presidential campaign, any mention of Common Core is a red flag for conservatives and Bush rarely talks about the program by its name. But he has not backed down on what is the core of Common Core — the conviction that states need to raise their school standards.

In Florida, a troubled rollout of new standardized testing linked to the standards has created a large enough backlash that the Republican-controlled Florida Legislature agreed to spend nearly $600,000 to study whether the tests should continue.

The study, released last month, affirmed the value of the tests. That’s done little to assuage critics and instead appears to be giving momentum to a push to junk the testing regimen that Bush put into place. School superintendents and parents are complaining loudly, and all that noise may begin to mar the “Florida model” that Bush talks about in his presidential campaign.

“This state and its accountability program have been dealt severe blows in the past couple of years,” Miami Dade Schools Superintendent Alberto Carvalho told the state education board in September. “Sadly it has lost a lot of the credibility it once had with the public.”

Bush’s ambitious plan called for using tests to measure student performance and to assign an A-to-F grade to schools that translated into financial rewards, or sanctions for low-performing schools.

His initial plan also allowed students in poorly performing schools to receive private school vouchers, although that program was thrown out by the courts.

Bush left office in 2007, but he remained an outsized influence over education policy thanks to former aides, advisers and allies who held key posts in the Legislature and on the state board that oversees education.

Florida’s schools showed signs of improvement during Bush’s eight years as governor. Reading scores for eighth graders, for example, rose faster than scores nationally from 1998 to 2011, according to an analysis based on scores used for the National Assessment of Educational Progress, also known as the “Nation’s Report Card.” The state also saw improvements in math scores and in the performance of its black and Hispanic students.

Florida’s graduation rate has steadily risen since Bush became governor, but remains below the national average.

Like most other states, Florida initially embraced the Common Core standards in 2010. Then-State Board of Education Chairman T. Willard Fair, who had opened a charter school with Bush, called them the “vital next step on Florida’s long-standing and successful education reform journey.”

Common Core was largely an initiative of state officials and is not a federal program or requirement.

But when the Obama administration swung behind the effort and began giving financial incentives to states that adopted the standards, that meant, in effect, a penalty on states that didn’t participate. And that gave rise to complaints that Washington was intruding on education matters that should be left to state and local people.

Bush tells crowds he does not favor federal interference in education but states must do better by students and stop “lowering expectations and dumbing down everything.” He says that whatever problems Florida is having now are not his responsibility.

“We created accountability, school choice, ending social promotion and we executed faithfully on all these things and we got a great result,” Bush said Wednesday after a campaign event in Iowa. “If other circumstances change, it’s the responsibility of the people there to focus on these things. I don’t follow it every day but Florida is now out of the bottom, and we’ve had gains post-my time there.”

Just as Bush has largely purged Common Core from his vocabulary, Florida legislators have removed all references to it in state law. In response to complaints from parents about onerous tests, they agreed to scale them back. But they’ve kept the bulk of the standards in place.

Legislative leaders and Gov. Rick Scott pushed to have Florida back out of a consortium that was drawing up a national test tied to the standards. But that withdrawal left education officials scrambling to come up with a replacement. They turned to a test drawn up initially for Utah schools.

Technical glitches and even a cyberattack marred the administration of the test in the spring. Students were confronted with blank screens when they tried to log on to take it.

For grading schools and evaluating teachers, Education Commissioner Pam Stewart says Florida will still use this year’s scores because the recent study supports that move.

Carvalho and other school superintendents are sharply criticizing that decision and want Florida to suspend the use of school grades this year, saying they have lost “confidence” in that system. Some legislators are now discussing replacing the test in high school grades with the SAT or ACT college exams.

“The American public is fed up with Common Core testing, which then reinforces the distrust in who they perceive is responsible,” said Randi Weingarten, president of the American Federation of Teachers.

State Sen. Don Gaetz, a self-proclaimed “Bush acolyte” who called for backing out of the national testing consortium when he was Senate president, said it’s wrong to “hang around Jeb Bush’s neck” the state’s current problems.

“Nobody was able to mount a challenge to the validity of the assessment while Jeb Bush was governor,” said Gaetz. The problems “haven’t occurred because of Jeb Bush.”