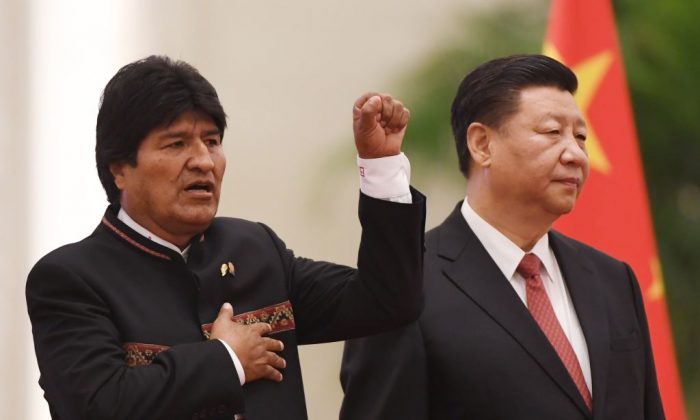 Bolivia's President Evo Morales (L) sings his national anthem as Chinese leader Xi Jinping (R) looks on during a welcome ceremony in the Great Hall of the People in Beijing on June 19, 2018. (Greg Baker/AFP/Getty Images)
Americas

As Bolivia Leader Sets Himself Up for 4th Term, China’s Influence Grows

A recent incident in Bolivia has demonstrated the repercussions of China’s influence.

On Feb. 14, Bolivian newspaper Los Tiempos reported that an investigation by the Bolivian forestry authorities discovered that four local sawmills had been illegally exporting high-value timber species to China. Unnamed former and current employees at the agency, called the Forest and Land Audit and Social Control Authority, had been involved in the scheme.

They have now been placed under investigation.

Now, Chinese investment in Bolivia is under scrutiny, given its far-reaching political and social implications for the South American country.

Current Bolivian leader Evo Morales, who has been president since 2006, aligned himself with Beijing early on, just after he won the election and became president-elect.

In January 2006, while visiting China, Morales called Beijing an “ideological ally” and expressed his admiration for the Chinese communist regime, according to Spain’s daily newspaper El Mundo.

Another Spanish daily newspaper, El Periódico de Aragón, reported that Morales declared himself a great admirer of former Communist Party leader Mao Zedong and his “proletarian revolution,” noting that he had read Mao’s biography “from a young age.” Mao’s Cultural Revolution campaign in 1966—which lasted until his death in 1976—resulted in the deaths of millions of people.

Relations with China took off after Morales’s visit. Bilateral trade between Bolivia and China grew significantly in 2008, according to a 2018 working paper published by the Global South Unit at the London School of Economics. Exports from Bolivia to China went from $16,000 in 1992 to $434 million in 2014, while imports from China grew from $7.5 million to $1.8 billion during the same period.

In 2015, China’s state-owned policy bank, the Export–Import Bank of China, agreed to provide $7 billion in loans to finance investments in Bolivia projects, including hydroelectric energy and rail infrastructure, according to Reuters.

Meanwhile, Chinese telecom giant Huawei also has worked with Bolivia’s national telecom provider Entel, and private providers such as Tigo and Viva, according to Bolivian newspaper Los Tiempos. Huawei reported on its website in June 2018 that Entel has completed the deployment of its new cellular base stations—for both 4G and 5G communications—called TubeStar.

And most recently, on Feb. 7, Chinese-listed construction and electrical engineering company Xinjiang TBEA Group was selected by the Bolivian government for a partnership on $2.3 billion worth of lithium projects, according to Reuters. TBEA Group would hold 49 percent stakes in a joint-venture with Bolivia’s lithium company YLB.

Beijing has sought worldwide access to lithium—one of the major components in electric car batteries—in order to supply its aggressive development of its domestic electric vehicle industry.

After years of Chinese investment, there are signs that Beijing holds a certain sway in Bolivia.

In 2016, Morales’s ex-girlfriend Gabriela Zapata was involved in a corruption case that proved to be a big scandal for the leader.

She was arrested in February 2016 as part of a corruption investigation. While charges related to her arrest were not made public at the time, CAMC had been awarded millions of dollars’ worth of contracts in Bolivia, including a railway project and a salt extraction and refinery plant.

In May 2017, Zapata was sentenced to 10 years in prison for money laundering, illegitimate contributions, and inappropriate use of public goods and services.

According to Bolivian newspaper El Deber, a court document showed that Zapata had lacked the necessary qualifications and work experience for her position at CAMC.

Morales’s political opponents accused him of influence-peddling, according to AP, a charge Morales denied.

On April 13, 2018, the United States, British, and French forces launched airstrikes against Syria, in response to a poison gas attack a week earlier, allegedly by the Syrian army, that killed at least 70 people in the Syrian city of Douma.

In response to the airstrikes, Russia called for an emergency meeting, proposing a resolution condemning “aggression” by the three countries, according to AP.

After a vote by the 15-member Security Council, eight countries voted against the Russian draft resolution while four countries abstained.

Russia only received votes from two countries—China and Bolivia.

The country now faces a crisis, as Morales has set himself up for another term in office.

Bolivia’s constitution stipulates that presidents can only serve a maximum of two 5-year terms.

But in April 2013, a court ruling allowed Morales to run for office for a third term in October 2014. The court ruling stated that Morales’s first term in office did not count toward the two-term limitation under the constitution because it was passed in December 2009, after Morales had already begun serving his first term.

In November 2017, another court ruling scrapped the presidential term limits. The court’s decision paves the way for Morales to run for his fourth term in the general election to be held in October 2019.

U.S. Sens. Bob Menendez (D-N.J.), Dick Durbin (D-Ill.), and Ted Cruz (R-Texas) recently introduced a bipartisan resolution raising concerns about the country’s future. “It is important for all parties to respect Bolivia’s Constitution, which includes term limits that serve as an important institutional check against corruption and abuses of power,” Cruz said in a Feb. 1 press release by the U.S. Senate Committee on Foreign Relations, of which the senators are members.

They called for democratic principles and supporting “the Bolivian people’s desire to maintain presidential term-limits.”

The senators also noted that Bolivia had aligned itself with “rogue and illegitimate regimes including Maduro’s in Venezuela.”

In the ongoing political turmoil in Venezuela, the legitimacy of embattled Venezuelan dictator Nicolás Maduro has been challenged by opposition leader Juan Guaidó.

A number of countries have announced their support for the latter, including the United States, Canada, Argentina, and Brazil.

But Beijing has staunchly defended Maduro.