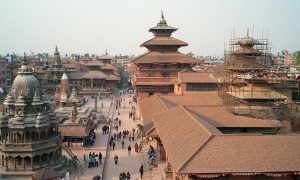 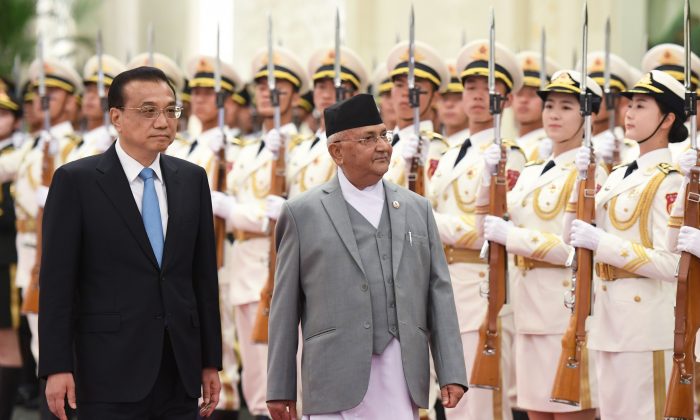 KATHMANDU, Nepal—It’s not very often that the United States and China, countries locked in a bitter trade spat, engage in a war of words concerning a small South Asian country.

But that’s exactly what happened between Joe Felter, the U.S. deputy assistant secretary of defense for South and Southeast Asia, and Chinese Ambassador to Nepal Hou Yanqi in the Nepalese capital Kathmandu late last month.

Speaking to reporters after arriving in Kathmandu on a three-day trip on Feb. 26, Felter urged Nepal to exercise caution before welcoming Chinese money.

“[S]ome of its activities do not appear to be necessarily in the best interest of the countries involved, such as increasing debt burden that we have seen,” The Kathmandu Post quoted Felter as saying. Hou, the Chinese ambassador, quickly dismissed his comment as “very ridiculous.”

The American diplomat was among the latest to raise questions about Chinese investment in the country, where wariness about debt burden from China-funded projects has grown in recent years.

For decades, China largely viewed its small but strategically important neighbor south of the Himalayas through the lens of security. Nepal not only borders its sensitive Tibetan region, but is also home to an estimated 20,000 Tibetan refugees, the second-largest population outside India.

In the run-up to the Beijing Olympics in 2008, Tibetan refugees intensified their anti-China protest in Kathmandu, prompting Nepal to crack down on them.

Around this time, China began to support Nepal’s Armed Police Force (APF) to stem the flow of Tibetans into Nepal.

Several years later, China rewarded the 25,000 strong paramilitary force with a training academy on the western outskirts of Kathmandu. Handed over to the APF in 2017, the $350 million academy spans 40 acres, with more than a dozen red brick buildings, an auditorium, football ground, basketball court, helipad, swimming pool, and shooting range.

Following the launch of China’s One Belt, One Road initiative (OBOR) in 2013, which has defined its foreign policy ever since, Beijing has brought its investments in Nepal under the framework, according to Ajaya Bhadra Khanal, research director at Center for Social Inclusion and Federalism, a think tank based in Kathmandu.

“China has to seek new markets both for its products and investment to maintain its economic growth. So it has expanded and invested across the world,” he told The Epoch Times.

“But in a country like Nepal, big infrastructure projects receive green signal for political reasons. Whether these projects are commercially viable … these aspects are rarely taken into account while agreeing for the funding,” Khanal said.

Though Nepal had signed on to the OBOR in May 2017, Kathmandu, which earlier had proposed 35 projects under China’s flagship initiative, cut it down to nine earlier this year.

China is building a regional airport in the tourist town of Pokhara as well as hydropower projects and roads across the country. From agriculture to tourism to manufacturing, its investment portfolio has multiplied over the years.

On March 2, Nepalese and Chinese officials laid the foundation stone for the construction of a cement factory worth $140 million in Dhading district in central Nepal, the second cement factory under Chinese investment in the country.

A proposed 72-kilometer (45-mile) railway linking the Tibetan region with the capital Kathmandu has been projected as a defining feature of evolving Nepal–China relations, though work on the $2.2 billion project has been slow in recent months. Nevertheless, it has already prompted China’s regional rival India to build similar rail links on its open border with Nepal.

Khanal, also a former editor for an English daily newspaper in Nepal, claimed that China had diverted money allocated to the airport in Pokhara to offshore accounts.

He said he found that the cost of the airport, which is scheduled to be completed in June 2021, was raised from $216 million to $305 million.

“There is a hidden aspect of corruption on projects under Chinese funds. Nepal is set to become a conduit for such corruption,” he said.

The airport in Pokhara, which requires 30 daily international flights for the operation to be commercially viable, is likely to fail, he added.

“Nepal suffers from lack of good governance. Big decisions are driven by personal political interest rather than national interest,” he said. “Nepal doesn’t have capacity to handle huge infrastructure projects. Neither is it able to control corruption.”

Bipin Adhikari (no relation to the reporter), a leading political commentator, said the Nepalese government must ensure that projects are awarded after competitive bidding, the public is consulted adequately, and transparency is maintained.

“We should not turn a blind eye to the issue of debt trap. [Debt] shouldn’t be rejected, but we must agree to projects that are sustainable,” he said. Projects such as the Trans-Himalayan railway also served a strategic purpose and were crucial for the country seeking greater connectivity with its northern neighbor, he added.

China’s growing footprint in Nepal has also prompted its arch-rival, the United States, to jump into the fray.

In September 2017, the U.S. Millennium Corporation Challenge issued a $500 million grant, its largest-ever infrastructure grant in Nepal, to build transmission lines and upgrade and repair roads across the country.

The United States has also placed Nepal under the Indo-Pacific strategy, the Trump administration’s geostrategic initiative to counter the rise of China.

After a meeting between Nepalese foreign minister Pradeep Gyawali and his U.S. counterpart Mike Pompeo in Washington, in December 2018, the U.S. Department of State issued a statement noting Nepal’s “central role in a free, open, and prosperous Indo-Pacific; and global issues, including North Korea.”

Wedged between India and China, Nepal will continue to be a focus for rival powers to gain influence in the small country.