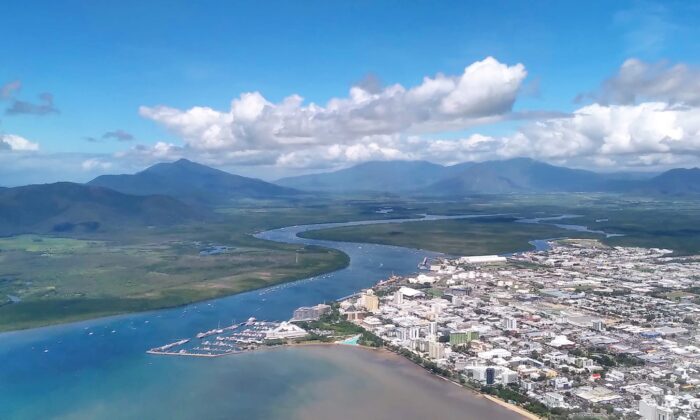 A general view of Cairns, Australia, from above taken on April 16, 2021. (Caden Pearson/The Epoch Times)
Australia

The marine precinct home to Australia’s HMAS Cairns naval base in Far North Queensland will receive $24 million worth of critical upgrades as part of a coalition Liberal-National Party election pledge.

“HMAS Cairns has played a very important role [in the Pacific],” Morrison told reporters in Cairns on April 28.

“This is where we’re providing patrol boats to every single Pacific Island Forum nation as part of our responsibilities, as we understand it, to help them to secure their own fisheries,” Morrison added. “This is what we’ve been doing for some time.”

As part of its 2020 Force Structure Plan, the centre-right Coalition government under Morrison invested around $155 million in facilities at HMAS Cairns in 2021 to support the Arafura Class offshore patrol vessels as part of the Navy Capability Infrastructure Sub-program.

That program was expected to source around 80 percent of its subcontractors from the local region. The promised new upgrades aim to turn the Cairns Marine Precinct into a leading place for maritime services that support tourism, the marine industry, and the needs of the Royal Australian Navy.

“This will create hundreds of jobs during construction and hundreds more highly skilled jobs once it is fully operational, creating enormous and continued economic benefits for the region,” Morrison said in a release.

“This builds on the region’s proud history of supporting the Australian Navy and Border Force and will ensure we can continue supporting naval and other shipping in northern Australia and the entire Pacific region.

“With the Great Barrier Reef a boat ride away, this will also make Cairns an even more attractive launch pad for private and charter boats, yachts, and superyachts keen to explore the region.

“Our economic plan is delivering this key strategic investment, securing a strong economy and a stronger future for Queensland,” he said.

HMAS Cairns, on the northeast coast of Australia, is around 1,700 kilometres from the Solomon Islands, which has just signed a controversial security pact with the Chinese Communist Party (CCP), which the country and its allies fear will undermine regional stability.

The controversial deal creates the framework for the Solomon Islands to allow the CCP to deploy police, troops, weapons, and even naval ships to “protect the safety of Chinese personnel and major projects in the Solomon Islands.”

Earlier in the week, Morrison said any Chinese military base in the Solomon Islands would represent a “red line” for Australia, saying the deal was a “shared concern” among governments.

Morrison cited the existing $155 million investment as evidence that his government had foresight on the evolving security risks in the region “well before the Labor party even found the Pacific in the last few weeks.”

The jab at his political opponents comes in reference to the opposition centre-left Australian Labor Party’s ongoing campaign criticisms that the Morrison government did not do enough to prevent the Solomon Islands from signing the security deal with the CCP in the first place.

Labor’s foreign affairs spokeswoman, Sen. Penny Wong, claimed that a lack of engagement by the Morrison government in the Pacific had opened the door for Beijing, describing the Beijing-Solomons deal as the “worst foreign policy blunder.”

Labor pledged its own $150 million investment to build a ship-lift facility for the Cairns Marine Precinct on the waterfront the day before Morrison’s announcement.

“The port authority is yet to put down the masterplan. They own the land,” Entsch said, according to The Cairns Post.

“The site that has been identified (by Labor) as a possible site is a swamp. It’s going to cost a hell of a lot more than $150 million.”

Morrison has also rejected Labor’s criticisms about Pacific engagement, and cited HMAS Cairns as one example of how Australia supports its Pacific neighbours.

Between 1987 and 1997, the Australian government provided 22 patrol boats and ongoing training to 12 Pacific island countries to enable them to police their own waters. In 2014, the government unveiled a $2 billion Pacific Patrol Boat program to strengthen security cooperation with its Pacific partners.

Morrison’s new election pledge promises support for the new Arafura Class Offshore Patrol Vessels that will be based in Cairns, $70 million for NORSTA Maritime to deliver the Royal Australian Navy’s Regional Maintenance Centre, and $36 million for TAFE Queensland in Cairns to deliver maritime training as part of the Pacific Maritime Security Program.

Entsch said the Coalition government had worked with local operators to design the wharf and ensure it is fit for future purposes.