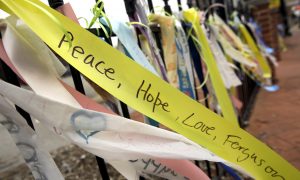 As Anniversary and Protests Fade, Ferguson Looks Ahead

FERGUSON, Mo.—By Wednesday, police outnumbered protesters in the St. Louis suburb that launched the “Black Lives Matter” movement, signaling that the nightly demonstrations could be fading after the anniversary of Michael Brown’s death. But Ferguson, and the issues that elevated it to national prominence, are sure to be closely watched in the months to come. A look at what’s ahead:

A protest organizer says the cause could now pivot to focus more on statehouses and corporate America.

“There are various ways of protests, and we don’t have to be in the streets,” Azeez said. “It’s going to take several different tactics … until we see real systematic change. I don’t think any of us are naive to think it will happen overnight.”

Azeez considered the Ferguson protests “meaningful in showing the world the power of community, collective love, and healing.”

“Ferguson is a very small problem with a magnifying glass over it,” she said. “But Ferguson is not our only problem. We have a whole region, state, country, and world that is our target.”

The city has a daunting to-do list, including hiring a permanent city manager and police chief.

The community is on its third police chief since March, when the former chief, the city manager, and the municipal judge all stepped down after a scathing Justice Department report. It blasted the police force for racial bias and the municipal court system for being a profit-driven enterprise that often targeted blacks.

Hired last month as Ferguson’s interim chief, Andre Anderson is on a six-month leave from his job as a police commander in suburban Phoenix. He has said he would welcome the job permanently.

Ferguson also has an interim city manager and soon will have to replace the municipal judge who took over after the previous judge resigned. Within months, the replacement judge will be required by law to retire because of his age.

All the while, Ferguson continues negotiating with the Justice Department over how to overhaul the city’s police department and municipal courts. The city is also defending itself against a wrongful-death lawsuit filed by Brown’s parents.

Statewide, Gov. Jay Nixon has asked a state commission and the Missouri Department of Public Safety to update law enforcement standards focusing on tactical training, fair policing, and the physical and mental health of officers. Those standards have not been updated since 1996. He wants proposals by Dec. 1.

The Quest for an Independent Probe

Activists continue their legal efforts to get an independent probe into the handling of grand jury proceedings in Brown’s death.

A grand jury last November declined to indict white Ferguson police officer Darren Wilson in the shooting death of 18-year-old Brown, who was black and unarmed. Wilson, who later resigned, was also cleared by the U.S. Department of Justice.

The activists have asked the Missouri Court of Appeals to consider the matter.

The Obama administration wants Missouri to retrieve two surplus Humvees from Ferguson, at least for now.

The Humvees were initially distributed to the St. Louis suburb under a national program that offers surplus military equipment and weapons to local police forces. But the Pentagon, citing a records discrepancy, is recalling two of the vehicles provided to Ferguson after learning the city had been given twice as many vehicles in 2013 without proper federal authorization.

The government’s giveaway of surplus military equipment to U.S. law enforcement agencies came under scrutiny by the Obama administration and Congress after some of that equipment was deployed during the protests that followed Brown’s death.

The Pentagon does not allege that Ferguson did anything wrong, only that the state—the program’s intermediary between local police and the Defense Department—must take control of the vehicles for the time being.