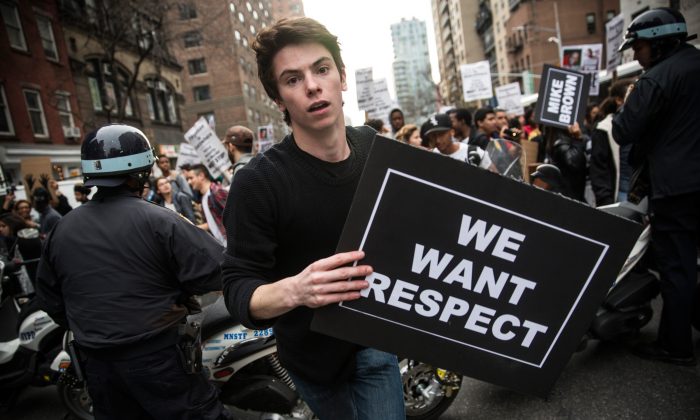 A man protesting the Ferguson grand jury decision to not indict officer Darren Wilson in the Michael Brown case breaks through police lines attempting to get protesters on the sidewalk while marching through the streets on December 1, 2014 in New York City. (Andrew Burton/Getty Images)
US

As Americans Worry Less About Economy, They Worry More About Other Things

More Americans rate the economy positively than negatively, according to last week Gallup’s Economic Confidence Index. That’s refreshing to see since the index has been depressingly negative since 2008.

But on the other hand, Americans are getting increasingly worried about terrorism. More than half of Americans are concerned a “great deal” about the possibility of a future terrorist attacks on the United States, according to a Gallup poll published March 17. A year ago, less than two in five Americans shared the same concern.

A string of murders of foreigners committed by the Islamic State in Iraq and Syria (ISIS), recorded on video and published online, likely played a major part in the increased alarm in the American psyche.

Race relations are now much more of a concern for Americans too. Last year, only 17 percent of poll respondents worried about race relations “very much.” This year it rose to 28 percent.

To be sure, economy is still one of the most widespread concerns for Americans, second only to a worry about availability and affordability of health care.

Also, the increased confidence in the economy may be shallower than it looks. Just last month Gallup demonstrated the Economic Confidence Index can be correlated to gas prices. The lower the price Americans see at the pumps, the higher the confidence index came out.