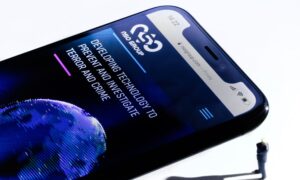 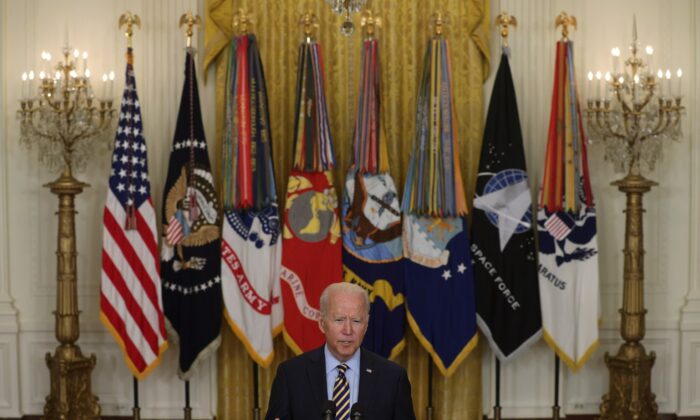 As Afghanistan War Winds Down, Controversy Over Policy Toward War-Torn Nation Continues

As the United States’ 20-year-long military deployment in Afghanistan draws to a close this month, with a deadline of Aug. 31 for completing its withdrawal, controversy remains regarding what the best policy should be, with continued airstrikes and budgetary increases supporting the Afghan government.

Former President George W. Bush has voiced concerns about the “unspeakable harm” the women in Afghanistan will suffer without U.S. protection, while former CIA Director David Petraeus has said that Biden is playing into the hands of the Taliban.

At a July 8 press conference on the matter, reporters badgered President Joe Biden with questions reflecting the Bush-Petraeus concerns.

“Is that a serious question?” Biden asked in response to a reporter’s question regarding whether he “trusts” the Taliban. “It’s a silly question. No, I don’t trust the Taliban, but I trust the capacity of the Afghan military.”

Even though the Taliban is at one of its strongest points in history with roughly 75,000 members and growing, Biden said he’s confident that the Afghan military’s roughly 300,000 soldiers will be able to hold their own.

But at the end of the day, the United States must accept the realities of Afghanistan, the president reiterated.

“No nation has ever unified Afghanistan. No nation,” he said. “Empires have gone there and not done it.”

Afghanistan is an area in which Biden has both political will and some measure of expertise. Biden’s involvement in Afghanistan has been documented by Steve Coll, who won the Pulitzer Prize for his work regarding the history of the wars in Afghanistan and Pakistan.

In one example, “Biden slammed his hand down on the table so hard that every plate jumped and rattled” during a heated argument with then-Afghan President Hamid Karzai, Coll wrote in his book, “Directorate S: The CIA and America’s Secret Wars in Afghanistan and Pakistan.”

“[Former Senator John Kerry] told [Karzai] that he had to understand that Biden had a son about to deploy to Afghanistan, that this was personal to him,” Coll wrote.

Dan McKnight, a former Marine Corps member and Afghanistan War veteran, said he hopes that Biden follows through on the U.S.–Taliban peace deal brokered by the Trump administration. The war should have ended long ago, McKnight told The Epoch Times.

“I believe we accomplished [the initial mission of driving the terrorists out of Afghanistan] by February 2002, and we should have come home. But mission creep and bad advice from misguided generals has kept us there for 20 years now,” said McKnight, who now runs the organization Bring Our Troops Home.

But despite Biden’s putting an end to the “military mission” in Afghanistan, there’s immense pressure from other stakeholders to maintain a presence there. As boots leave the ground, U.S. airstrikes against Taliban targets have spiked in recent weeks, and officials haven’t given any indication that they’ll stop.

“The United States has increased airstrikes in support of Afghan forces over the last several days, and we’re prepared to continue this heightened level of support in the coming weeks if the Taliban continue their attacks,” U.S. Marine Gen. Kenneth McKenzie said at a July 25 press conference in Kabul.

Scott Horton, the author of the 2017 book, “Fool’s Errand: Time to End the War in Afghanistan,” said this continued U.S. support could be a temporary measure to prevent another “fall of Saigon” moment—when U.S. personnel had to be evacuated from the embassy rooftop as Vietnam collapsed into communism around them. But without boots on the ground, long-term support for the Afghan government will be very difficult to maintain logistically, Horton said.

“Where are we going to launch airstrikes from? The Pakistanis don’t want to give us a base there. We have to have the Russians twist arms in Uzbekistan or Tajikistan or something to let us launch airstrikes from there. We launched some from carriers in the Indian Ocean, but really only on a very limited basis,” said Horton, who’s also the editorial director of antiwar.com.

“And we could fly all the way from Qatar or Diego Garcia to come drop a couple of bombs on a couple of Talibs, and then turned back around and fly back to a few thousand miles again. But it doesn’t make much sense to do it that way, and I think they really are calling it quits.”

However, Horton warned that civil war and chaos will surely follow the withdrawal. Once there are no U.S. B-2 bombers around, the Taliban will likely start invading provincial capitals one by one. This, in turn, will ramp up the pressure for the United States to become involved once again, Horton said.

Critics of Biden’s withdrawal say the Taliban can’t be trusted to live up to this agreement. To their point, it was the Taliban who allowed Afghanistan to become a breeding ground for terrorism in the 1990s.

But Horton said the Taliban should have learned its lesson.

“The Taliban make bad decisions, but it would be absolutely irrational for them to allow [terrorists] back into Afghanistan when that’s exactly the kind of thing that’ll get them carpet-bombed,” he said.

Even after the Sept. 11, 2001, terror attacks, Taliban leaders seemingly had little idea of the grave error they had committed by giving Bin Laden refuge in their country. According to Coll, a Pakistani intelligence official visited the Taliban immediately after 9/11 to convince them to kill or expel Bin Laden from the country immediately.

“Don’t you see this giant anaconda approaching Afghanistan? As emir of 25 million Afghans, is your oath of hospitality to Osama more sacrosanct than protection of your people?” the Pakistani official reportedly pleaded with Taliban leader Mullah Mohammed Omar.

In response, an assembly of Taliban leaders issued a statement to the effect that Bin Laden was “free to leave Afghanistan of his own free will”—a concession that “barely registered in Washington,” Coll wrote in “Directorate S.”

This mistake caused nearly 20 years of strife, and the Taliban was nearly wiped off the face of the map before going into hiding.

“After all of the trouble Osama bin Laden got them into the last time around, it really doesn’t make sense for them to let Al Qaeda stay there again,” Horton told The Epoch Times.

Another sign that the Taliban has learned a brutal lesson in diplomacy is the fact that they’ve recently worked with the U.S. military to fight jihadis. The Washington Post reported in October 2020 that Joint Special Operations Command (JSOC) officials joked that they’ve been serving as the “Taliban air force” in a recent campaign against a terror group known as “ISIS K”—a small group of Pakistani rebels who fled their country during Obama’s drone wars there around 2010.

But even if the Taliban betrays the United States and allows terrorists safe haven again, Horton still expressed skepticism at the notion that Afghanistan poses a national security threat to the United States. The 9/11 terror attacks stemmed from a massive U.S. intelligence failure, not from a lack of U.S. presence in Afghanistan, Horton argued.

“The reason that the Sept. 11 hijackers were able to get one over on us was because they were Egyptians and Saudis—essentially upper-middle-class guys. Especially the pilot hijackers, who were studying engineering in Hamburg, Germany, and had student visas to the United States,” Horton said.

“So there was no magic portal from the White Mountains in Nangarhar Province to Boston Logan airport. It was Americans that let them into the country, when they could very easily have kept them out.”

If U.S. politicians choose to redeploy troops in Afghanistan, McKnight demanded that they do so constitutionally. Instead of endless nation-building efforts, Congress must declare war with a specific security goal in mind—and then leave once that mission is accomplished, he said.

“If I’m leaving my family and my business at home and spending up to 18 months in a landlocked nation in Southern Asia, I don’t want to be there to build roads or schools. Our mission in the military is warfighting,” McKnight said.

“If we need to go back into Afghanistan for our own national security interests, then we should declare war. Congress, the representatives of the people, should stand before us and put their name on the line before we put a single boot on the ground.”