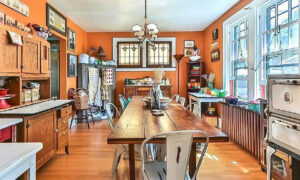 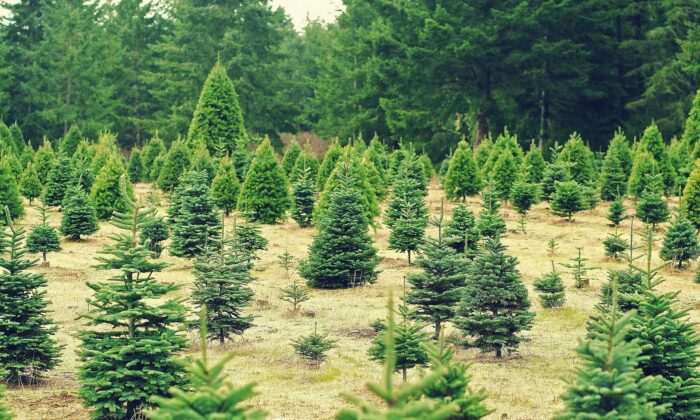 NEW ALEXANDRIA, Pennsylvania—If you’re not paying close attention, you can easily miss the dirt road that leads to the Flemings Christmas tree farm just off U.S. Route 22 in western Pennsylvania. The sign for the turnoff from the two-lane highway is covered in fresh snow, and within just a few feet along the narrow road, you enter a winter wonderland that curves along a steep mountain ridge.

The scene soon becomes majestic as you find yourself surrounded in all directions by the tree-filled Laurel Mountains that make up this nearly century-old farm. At the very base of the ridge is a pristine pond reflecting the mountains and the snow.

To the right is a quaint cabin, and the scent of a fresh fire from seasoned pine pours out of its stone smokestack. It is decorated with red-ribboned wreaths and filled with Christmas trinkets. To the left, along the ridge, a red tractor sits with Christmas trees piled in the back. The scene looks like it came from an ancient Currier and Ives postcard, drawing you in with a much-needed aura of nostalgia.

There is so much we have lost in the year of the pandemic: loved ones; jobs; multigenerational family businesses that have survived devastating depressions and wars only to fall to forced closures; the intimacy of conversations; hand holding; and even that pure jolt of connection that comes from a simple hug.

We’ve also lost that very important sense of anticipation, and all the emotions and expectations that go along with it: the end of the school year; the beginning of summer; family vacation; summer festivals; the beginning of school; the start of football season; figuring out what you or your children will be for Halloween; seeing family and friends over Thanksgiving and Christmas; and all of the foods and smells and traditions that go along with all of these events.

We are all in some way looking for something that draws us together, even if it’s with only a handful of family members. Coming to Flemings has a really wonderful way of giving us a glimpse of our former lives.

On weekends, there are hayrides and hot chocolate, and Santa sits outside to greet the young and the not-so-young as they head up the mountains to pick and cut their own tree.

Preston Fleming, 32, bought the farm from his great-uncle this year. He has worked here since he was 14 years old. After opening the farm for the first time last weekend, people are more eager than ever to cut their own tree, because they have lost so many other traditions. “There is this sense this year to do something that continues a lost tradition or start a new one, even something as simple as cutting down a tree,” he said. “If you can do it with your kids or other family members, you have found something new to start or bring back a lost memory.”

At the turn of the 20th century, most people cut their trees in nearby forests. By the 1920s, people began buying trees grown on farms, a tradition that helped farmers extend their crop season beyond October pumpkins.

Over 50 million seedlings are planted every year by tree farmers. “It takes a good eight years and a lot of tender care to get a mature tree,” Fleming said. “There used to be a lot of Christmas tree farms around here. Most of those farmers, though, have given up the crop. Not me. I planted on hundreds of acres.”

According to data compiled by Hobby Farms, there are nearly 15,000 farms growing Christmas trees in the United States, employing more than 100,000 people in the industry. The top-producing states include Pennsylvania, Oregon, Michigan, Wisconsin, and North Carolina.

Shawn Lyman has worked for Flemings since he was 17 years old. By the end of the month, he will turn 49. He said: “I went to California for a bit in between, but I wanted to come back. I love working here. You get a sense of family, not just from your coworkers but from seeing the same families coming back every year.”

Lyman, of Creekside, and another longtime employee, Michael Highducheck of Shelocta, were busy running the ancient red tree baler. The motor hummed as they carefully fed the trees through.

Last year, Fleming’s uncle didn’t open the farm. Fleming put a lot of work into opening up this year, but two weeks ago when he put up the sign announcing its return, he didn’t know what to expect. “I had no idea how much we really meant to people until last Friday, until the cars started coming around the ridge,” he said. “A lot of new customers, too. People are looking for something good, some joy. I think we provided that.”

He paused and then said, “It’s a pretty good feeling.”