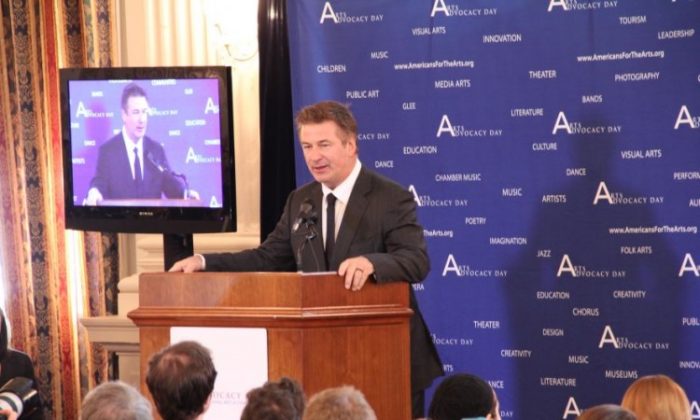 Alec Baldwin and an ensemble of performers, artists, and arts business founders made an impassioned plea for support for the arts in Washington D.C. this week.

The delegation presented their case the morning of April 16, Arts Advocacy Day, at an event on Capitol Hill.

“The arts are beyond essential,” says Baldwin, the award-winning star of NBC’s 30 Rock, who noted that funding for the arts had declined since the 1990s. “Make no mistake, we are right now $90 to $100 million less in actual federal subsidies,” he said.

President Obama has requested more than $154 million in arts and humanities endowments for his 2013 budget, $8 million more than last year. The arts group was there to encourage Congress to approve the funding.

According to the delegation, the arts are essential for higher-level thinking, the sort of thinking needed in the modern world. The arts are also job creators and important contributors to the economy, not only through arts industries but also tourism.

According to an annual Arts & Economic Prosperity study conducted by Americans for the Arts, the nonprofit arts and culture industry generates around $166 billion for the U.S. economy each year, the bulk of the revenue generated from event-related spending by audiences.

Included in the delegation were singer-songwriter Ben Folds; author and actor Hill Harper, best known for his portrayal of Dr. Sheldon Hawkes in the CBS drama CSI:NY; and former dancer Nigel Lythgoe, now creator, executive producer, and judge for So You Think You Can Dance.

Addressing supporters at the advocacy event at Cannon House, Hill Harper said the things people really cared about in society, and that had legacy, had usually been designed by artists. This includes the very buildings that housed the nation’s lawmakers, he said, as he looked around the high-ceilinged and beautifully decorated Cannon Caucus Room.

“We can’t be silent any more, we have to be louder,” Harper stated.

British-born Lythgoe said American education was failing its people in regard to the Arts. He warned that America was losing its rich musical and dance heritage—a conclusion he had come to as a result of the thousands of auditions he conducts with young performers every year. Most of them were highly talented, he said, but ignorant of their country’s performing arts traditions. “We need to fight for that,” he said.

Rocco Landesman, chairman of the National Endowment for the Arts (NEA), noted recent research that identified the positive impact the arts have on students, most significantly in schools in low socioeconomic areas. They have higher GPA scores, read more, and are more likely to go to college and proceed to careers, he said.

Congressman Jim Moran (D-Va.), chairman of the Interior Appropriations Subcommittee, which includes the NEA, said times were tough but art was worth fighting for. “The arts are truly the embodiment of who we are and what we value. Without federal funding, the diffusion of this understanding and insight and empathy with the others among us will suffer,” Rep. Moran said.

He continued. “The expression of our humanity, of the grace and beauty of ballet and dance, the clarity of good theater, the connections to the better angels of our human nature, will all suffer the fate of an empty soul.”

Moran said the arts would always survive, but any decrease in support would ultimately “impoverish us all.” “Great performances and productions will be shared less,” he said.

While in Washington, Baldwin, 54, delivered the annual Nancy Hanks Lecture on Arts and Public Policy on behalf of Americans for the Arts at the D.C.’s Kennedy Center. He highlighted the significance of the arts in everyday life and noted how his appreciation of that contribution had deepened over the years.

Now, it is: “So much art, so little time,” Baldwin told the audience.

His tastes may have become refined as well. The Emmy Award-winning actor told The Associated Press that he views the television and film industries he works in as the “potato chip business–it’s junk food.” He said as much at the National Press Club, too, declaring that his role as on-air announcer for the New York Philharmonic’s weekly national radio series, held since 2009, was a high-point of his week.

“When they play, you feel like it is lifting you off the ground,” he said.

A resident of New York, Baldwin said he was lucky to live in a city that thrived on the arts, which he believes are at the forefront of freedom of expression and important to a nation’s cultural heritage. The fact that many communities in America remained without adequate exposure to the arts, was a major concern, he concluded.