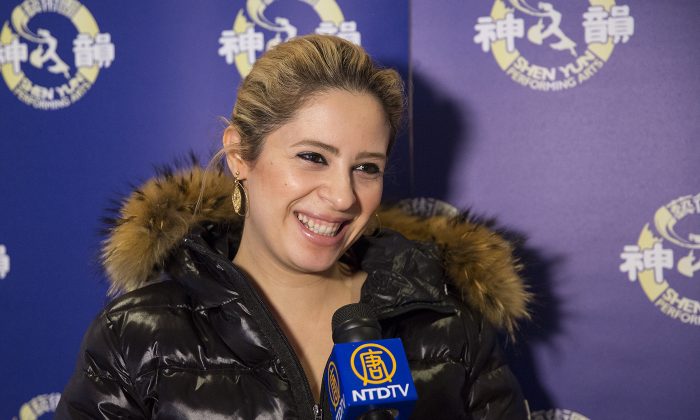 Painter Mozhdh Pirvaly attended Shen Yun Performing Arts as a Christmas gift from her nephew. She was impressed by the beauty of the colours onstage, at the Sony Centre in Toronto on Jan. 23, 2015. (Evan Ning/Epoch Times)
News

TORONTO—The basic definition of an artist is simply someone who seeks to express him or herself through a given medium.

But in traditional Chinese culture, art was created with an aim to transcend the individual, and to instead glorify cherished virtues such as benevolence, wisdom, and respect for the divine.

The artists of ancient times sought to go beyond themselves and their own ego through their art, believing that only this way could they display true beauty.

This tradition is being reawakened by the creators of classical Chinese dance and music company Shen Yun Performing Arts. Formed by overseas Chinese artists in 2006, the group aims to revive China’s 5,000-year-old divinely inspired culture and values through classical art forms.

Shen Yun is performing at Toronto’s Sony Centre from Jan.21-25, and made a deep impression on artists in the audience, many of whom recognized the heart and talent of the performers and the sublime quality of their artistry.

“I can’t express in words just how amazing they were,” said audience member Mackenzie Pittman, who has been dancing ballet since she was 2 years old.

“Their technique was amazing. You can say that they were well-trained dancers, [that] from a very young age they were taught good techniques, good turns. Their feet were amazing. It was breathtaking,” she said.

Ms. Pittman was also impressed by the ability of classical Chinese dance to convey the inner feelings, as well as the ability of the dancers to connect to the sounds of the music. “It was amazing,” she said.

Painter Mozhdh Pirvaly received a ticket to Shen Yun as a Christmas gift. She was overcome by the beauty of the costumes and the colour combinations present in the performance.

“I’m speechless,” she said of her feelings seeing the colours onstage.

Margharita Rachoff, a trained graphic designer, also noted the beauty of the colours and choreography.

“The use of the stage is very artistic,” she said. “The way that they’re moving-they flow. It’s almost like they’re floating across the stage instead of just walking. A normal walk would be like a bounce-they’re just like floating on air. It’s beautiful.”

Many audience members who’ve watched Shen Yun commented on the dancers’ ability to seemingly float onstage. This can in fact be attributed to the mastery of a special classical Chinese dance technique called “yuan chang,” a heel-to-toe mini-step that is so quick and smooth it gives the impression the dancers are floating on a cloud, according to the Shen Yun website.

Marielle Lyon has dedicated her life to dance. She trained with the Royal Winnipeg ballet and now dances as a professional cheerleader with a large sports organization in Toronto. Watching Shen Yun’s artists perform classical Chinese dance, she was fascinated.

“Every single move is so intricate and detailed,” she said.

She was particularly surprised by the way the dancers incorporate their costumes and props into the dance. “It’s not just their body movement like in regular western ballet. They actually use instruments to create the dance moves–the sleeves, the fans, the chopsticks.”

According to the Shen Yun website, classical Chinese dance, like ballet, is one of the most comprehensive dance systems in the world. There are, however, many key differences in their histories, training, physicality, technique, and cultural influences.

“It’s overwhelming seeing all the costumes and the pattern changes and how precise they are on the stage. It’s really captivating,” said Ms. Lyon, adding the colour combinations were extraordinary.

“They’re bright and intricate and detailed, and underneath the skirt is a different colour than over top. Every kick you see something different.”

Ms. Lyon’s boyfriend, Thomas Murphy, was taken aback by the visual impact of the performance. “Just watching, you’re in awe seeing it,” he said.

“I was just amazed at the whole show, fascinated,” echoed industrial designer Soheil Afat. “It was very eye-opening for me.”

Frank Zolnai, president and general manager at the Ontario Conservatory of Music, was impressed with the Shen Yun Orchestra’s unique blend of Chinese and Western instruments. Traditional Chinese instruments such as the pipa and suona lead all-original compositions created for each dance.

“It’s great. I haven’t heard the ethnic music to that extent before with a symphony. It’s very interesting for me to listen to because I work in the music field,” Zolnai said.

“Technically I was listening to the musicians. The musicians are really good—they are not making any mistakes that I can hear.”