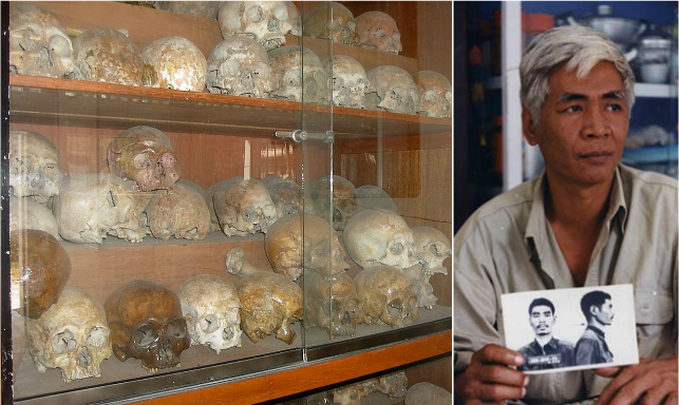 A survivor of the notorious communist Khmer Rouge torture camp revealed that he and other inmates were forced to eat insects to stave off starvation—adding that they ate their meals alongside corpses of former inmates.

Vann Nath, a Cambodian artist, is one of only seven survivors of the notorious secret Khmer Rouge prison camp called S-21. Some 14,000 men, women, and children were tortured, interrogated, and executed during the far-left Khmer Rouge regime headed by Pol Pot that ruled between 1975 and 1979, according to his biography.

Nath explained that he was kept alive due to his skill as an artist so he could paint pictures and make sculptures of Pol Pot, who presided over a Maoist-inspired totalitarian dictatorship who forced city denizens to work at collective farms.

Pol Pot essentially tried to take Cambodia back to the middle ages in a stark form of social engineering that ended in catastrophe. Executions, extreme work conditions, and other factors killed off a quarter of the Cambodian population in Pol Pot’s “Year Zero” campaign—in which he declared the nation would start again. Out of a population of around 8 million, at least 1.7 million people died.

Many who were tortured at Tuol Sleng—the prison where Nath was held between January 1978 and January 1979—were sent to the so-called “killing fields” near Phnom Penh.

“My suffering cannot be erased—the memories keep haunting me,” he said at a trial several years ago. Nath added: “We were so hungry, we would eat insects that dropped from the ceiling.”

“We would quickly grab and eat them so we could avoid being seen by the guards,” he added, according to The Independent.

“We ate our meals next to dead bodies, and we didn’t care because we were like animals. The conditions were so inhumane and the food was so little. I even thought eating human flesh would be a good meal.”

Under the Khmer Rouge, which eagerly tried to emulate the Chinese Communist Party, anyone believed to be an intellectual was killed. People were killed for wearing glasses.

The only reason he wasn’t killed, Nath added, was because he could paint pictures of Pol Pot. His captor, nicknamed “Comrade Duch,” learned of it and kept him around. “I survived because Duch felt good when he walked into my workshop,” he added.

But before that, Duch allegedly electrocuted him, beat him, and ripped out his fingernails. He and other prisoners also endured “water torture” and were fed six teaspoons of rice porridge per day.

The regime was eventually overthrown in 1979 by Vietnamese troops after several violent border confrontations. Pol Pot and some of his forces were forced to retreat into the jungle, where the former dictator died in 1998.

The regime followed a Marxist-Leninist doctrine, which insists that rulers of the old society such as the landowners, capitalists, government leaders, and military commanders are “class enemies,” and they can therefore be targeted for elimination by the government.

But according to rights group Genocide Watch, “Cambodians had long distinguished city people from rural people, considering the city people more corrupt” before the Khmer Rouge took over. The regime found it only natural to label city people as “new people,” who were not “purified” by the revolution and were considered less moral or more corrupted by foreigners than rural people. They were thus considered traitors and class enemies and were sent to collective farms, often to their deaths.