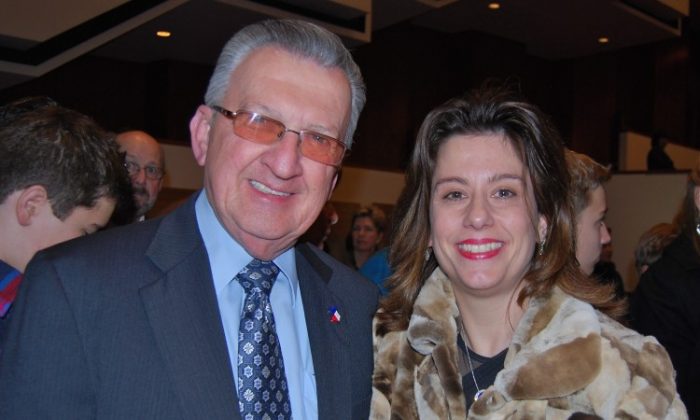 “I could tell it was a very ancient story that had been brought to life,” said Ms. Berg, who attended the performance with her daughter Martha Houston, and granddaughter.

The New York-based company’s revival of 5,000 years of Chinese civilization and culture, through the medium of traditional Chinese art forms, delighted the Houston audience for the fifth time this season.

“I thought it was visually delightful,” Ms. Berg said. “The color, and the use of the [digital backdrop] screen, the changing colors, it was outstanding. I enjoyed it.”

With stories ranging from a legend of the Tang Dynasty emperor Tang Xuanzong’s journey to the moon, to the vignettes from the beloved epic Journey to the West, Shen Yun’s audience is transported to a magical world from dance to dance, getting a glimpse of China’s rich history.

“It was rather up to date and modern, so I thought it was a nice blend,” Ms. Berg said of the use of multimedia.

Classical Chinese dance is one of the most comprehensive dance systems in the world alongside ballet, according to the emcees, and includes many highly difficult moves and specific postures that require high technical skill.

In addition to classical Chinese dance, Shen Yun performs ethnic and folk dances from many of the 55 different ethnic minorities of the country.

Ms. Berg praised the international production, saying it was “very, very cleverly done. Having to travel from stage to stage the way they were able to put it together and be such a visual delight.”

Her daughter, Martha Houston, agreed. “I loved the costumes and the things they did with the [props],” Mrs. Houston said. “I thought it was fabulous. And we haven’t even talked about the orchestra!”

“I’d love to have an opportunity to see those instruments,” she said. “I’d like to see what they look like, and how they’re used.”

Shen Yun Orchestra, which performed in the Carnegie Hall this past year, combines a unique blend of western philharmonic and traditional Chinese instruments.