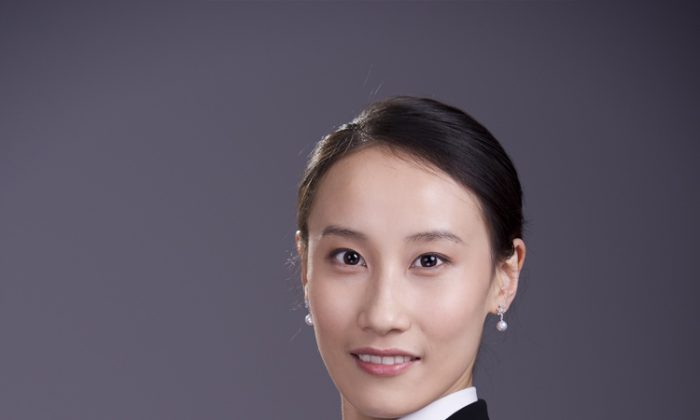 “That was easy because the handkerchiefs are still in my hands,” she jokes.

Ms. Liu tosses her handkerchief, which whirls high into the air. She does another walkover, and gracefully meets the flying handkerchief, catching it on cue.

“You have to throw it with a certain momentum and a certain speed,” she said. “And catch it on the right beat of the music from the live orchestra that may be faster or slower than the previous day.”

Ms. Liu said she was assigned with just about every difficult technique there was in the dance—Snowflakes Welcoming Spring.

She completed 85 shows when performing in practicum with Shen Yun Performing Arts during tour this year, and all without a single dropped or tangled handkerchief.

“I found some tricks to that. I have to really calm myself before I do it so I have a good starting point,” she said. A great performer needs to have the skill of keeping calm while hundreds of eyes are watching one’s difficult solo.

“It comes with the years of experience. I don’t get as nervous on stage anymore,” she said.

Ms. Liu is the award-winning lead dancer performing in practicum in Snowflakes Welcoming Spring, a dance in Shen Yun Performing Arts’ 2012 program. Shen Yun is a classical Chinese dance company based in New York, with a mission to revive 5,000 years of Chinese culture.

Amongst the group of world class dancers, choreographers find that Ms. Liu is particularly strong in her techniques.

“I’m normally always selected to do the techniques,” she said.

While other distinguished dancers may get to the top by working hard, Ms. Liu does a little more than just practicing overtime.

“Good techniques can’t just be achieved through mechanical practice. You have to think about the angles, directions, and trajectory to get the best results,” she said.

Ms. Liu uses mathematical and physical axioms to improve her techniques. “I discovered that for any kind of leap, the best liftoff jumping angle for achieving the maximal horizontal distance is indeed an angle of 45 degrees.”

Ms. Liu says that coordination is a big part of it. “I’m pretty coordinated so I’m good with techniques. But I like to think a lot, so that helps with portraying characters.”

Portraying the feeling behind the dance moves is an essential aspect of classical Chinese dance. It is expressed through bearing, or the inner spirit of the ethnic Chinese flavor that focuses on the internal spirit, breath, persona, and deep emotional expressions.

Bearing is closely tied to a deep understanding of the Chinese heritage.

Apart from training and rehearsals, Ms. Liu enjoys reading about Chinese history in her spare time. “There’s so much there that you can never get through it all. Reading helps extend my understanding of traditional Chinese culture,” she said. “There’s a whole cultural process of building the movements.”

Ms. Liu’s favorites are classical Chinese poems, particularly ones by Li Bai—who is known as the greatest poet of the Tang Dynasty.

In the past, Shen Yun performed a dance called Water Sleeves, where dancers glide with pink, weightless, silken sleeves in front of an advanced digital backdrop of a serene lake.

To conjure inspiration, Ms. Liu used a verse from a Wang Bo poem, written during the Tang Dynasty, to find the right feeling for the dance: The autumn river shares a scenic hue with the vast sky; The evening glow forms a parallel with a bird to fly.

Choreographers often laud Ms. Liu for her well-rounded talents. She not only has superb control over complicated technical flips and jumps, but also masters bearing—which some professionals claim as the most difficult aspect to achieve, the essence of Chinese dance.

“Art is all about improving, it’s never ending,” Ms. Liu said. “There’s never a cutoff in art because you can always be better.”

Ms. Liu has participated in the NTD Television’s International Classical Chinese Dance Competition for several years. She distinguished herself as a first place winner in 2009 and 2010.

Ms. Liu choreographed many of her movements herself. She spent countless hours bringing out the right feeling. “I’m a perfectionist. I record myself and watch it, then record myself again and watch it. I do that over and over again.”

Ms. Liu says that for her, “each performance is different … I never repeat the same thing,” she said. “There’s something to learn and improve on from each performance.”

Out of a legion of dances that Ms. Liu has starred solos in, Ms. Liu said her most memorable role was a mother, whose husband lost his life for practicing Falun Gong in China. Falun Gong is a spiritual discipline, based on truthfulness, compassion, and tolerance. It was banned in China in 1999, and since then thousands have been brutally persecuted.

Ms. Liu says she has been brought to tears while dancing this role on stage.

“It was a very touching, emotional piece,” she said. In preparation for the role, Ms. Liu read extensively on true accounts of persecution stories in China.

“I just imagined how horrible it would be if it actually happened to me,” she said. “As a performer, you have to play many kinds of roles. It’s a skill to be able to imagine things and just go from there without actually experiencing them.”

Ms. Liu said she puts her heart into each performance. She often sees audience members shedding tears. “It’s very touching; it makes me want to do better each day.”

Amelia Pang
Journalist
Amelia Pang is a New York-based, award-winning journalist. She covers local news and specializes in long-form, narrative writing. She holds a Bachelor’s degree in journalism and global studies from the New School. Subscribe to her newsletter: http://tinyletter.com/ameliapang
Website