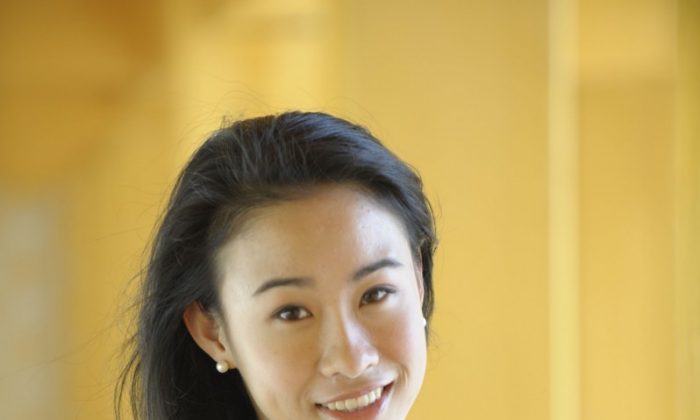 At her competitive Fei Tian Academy audition in Sydney in 2007, Seron Shinn Chau counted 60-some candidates aspiring to enter the prestigious academy. As the field was whittled down through various tests and exercises, the talent evaluators said not a word to her. But they were observing, and eventually, they pointed to her and another applicant, taking them backstage for specific dance and technical routines.

In the end, Ms. Chau was the only one of the field of 60 selected to enter the rigorous and rewarding training, a program that put her on the path to participate in a practicum as a dancer for Shen Yun, the premier international classical Chinese dance company.

She joined Shen Yun’s New York Company in the practicum through Fei Tian Academy of the Arts and has toured dozens of cities on four continents since her auspicious audition for the Academy.

Ms. Chau grew up in Australia. Her first language is English, but she also speaks Cantonese and Mandarin. Though she attended Chinese school for seven years in Australia, she says, “I learned a lot about my heritage when I danced with Shen Yun.”

The ‘Flavor’ of Dance

“For Chinese dance, it’s not just about the technique,” said Ms. Chau. “It’s the shen yun shen fa, the flavor of classical Chinese dance. That’s something that you can never stop learning about, no matter how developed as a dancer you are, because it has to do with Chinese culture.”

Ms. Chau is noted for outstanding expressiveness on stage. She highlights this strength in her dance competition appearances.

Ms. Chau advanced to the semifinals of the 2011 NTD Television’s International Classical Chinese Dance Competition. She portrayed the mythical character Chang’e from the Shen Yun dance The Lady of the Moon. In the story, Chang’e drinks an elixir of immortality and flies to the moon. Ms. Chau performed the dance portraying beauty and grace in a long, flowing vibrant golden-orange gown that accentuated her elegant spin moves.

Shen Yun performs ethnic folk dances, in addition to classical Chinese dance pieces. The ethnic dances may include Tibetan, Mongolian, Dai, Yi, or Korean, among others. Ms. Chau talked about the range required for the diverse ethnic dances.

“They all have their owns styles, they’re all distinctive,” she said. “We have to learn so many ethnicities. Some people [in other dance companies] might specialize in say, Mongolian, but as Fei Tian dancers who perform at Shen Yun, we might have five different ethnic dances and we have to learn them all, and make them all so that we are dancing them with flavor. You have to bring depth to it.”

“I’m a bit of a perfectionist,” said Ms. Chau, acknowledging the unlimited potential of the art form of Chinese dance. “With every performance and tour you mature in your understanding as to what you’re doing. The programs are getting harder and harder every year.”

The dancers practice, train, and study really hard most of the year, and have about a 5-month performing season. “It’s really worth it,” said Ms. Chau, “performing for the audience, and all the hard work. You just can’t wait to perform and go on tour again, and sometimes when you’re performing on tour, you can’t wait to rest.

“As a performer, you see the audience’s reaction, it changes your outlook on things, you just feel like it’s worth it.”

She elaborated her understanding on Shen Yun’s special mission as an arts company.

“With Shen Yun they are trying to revive Chinese culture, and I feel very honored to be part of that in my performances.

“We hear about a lot of audience feedback, especially from people from China. They always say, ‘Shen Yun is the future for China,’ because a lot of China’s most traditional, basic culture is all forgotten, especially by the youth, because the communist party has destroyed too much of it.”

She was alluding to the Cultural Revolution and other mass movements by the current regime to erase or bend Chinese history and traditional culture for the regime’s own purposes. To Ms. Chua, Shen Yun, by contrast, aims to revive and restore China’s five millennia of history, tales of heroism and virtue, and arts filled with the most noble characteristics of humanity.

Ms. Chau said, “I guess, through the language of classical Chinese dance, we are like the pioneers for the future, in reviving Chinese culture.”