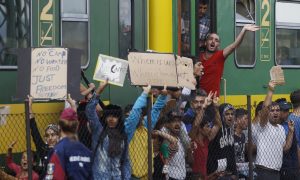 One of the main components of classical Chinese dance is bearing, the inner spirit that is passed down through the cultural DNA of the Chinese heritage. Bearing is portrayed through the breath, aura, and deep, internal expressions.

“I grew up in Canada and I am half-Italian,” Ms. Zhou-Galati said. “For Chinese people, it’s in them. But I had to really look into the history to truly understand and learn the everyday life of ancient Chinese culture.”

Ms. Zhou-Galati is one of the principal dancers performing in practicum with the New York-based Shen Yun Performing Arts, a classical Chinese dance company with a mission to revive 5,000 years of Chinese culture.

“It’s very important for the Chinese people,” she said.

Ms. Zhou-Galati featured in Shen Yun’s Yi ethnic dance, representative of one of China’s oldest ethnic groups. With a history of 3,000 years, the Yi are known for their natural gift for song and dance imbedded in their daily lives. Many of the Yi dance moves are imitations of daily routines, such as the Beating Buckwheat Step that is inspired by the annual harvest.

She embraced the Yi culture so well she was chosen to be the lead dancer.

It is part of the Yi culture to incessantly seek occasion to “dance out” their feelings, and Ms. Zhou-Galati captured the essence of that culture with her dancing. “I think it’s really important to use your heart when you dance,” she said.

An Ancient Culture That Stems From Spirituality

Spirituality is deeply intertwined with Chinese culture. From calligraphy, to paper, to agriculture—the Chinese believe their culture is divinely-inspired.

“But so much has been destroyed [under the Chinese Communist Party] that they don’t believe in the divine—which takes away the root of traditional culture,” she said.

Ms. Zhou-Galati said her secret to capturing the essence of Chinese culture is that she holds herself to a higher moral standard in her personal life, as if she were living the life of an ancient Chinese person.

“Many people don’t think about that anymore,” she said. “Shen Yun is really bringing back and reviving lost Chinese culture.”

“When people see our show, it really touches their heart and that’s why, but they can’t put their finger on it,” she said.

Ms. Zhou-Galati demonstrates her superb techniques in the dance Water Sleeves, in which she also features as lead dancer.

Under the control of the dancers’ arms, pink sleeves of silk whisk into the air, gently flowing down in layers. The dancers flit across the stage to form the final scene of Water Sleeves. They surround Ms. Zhou-Galati who, in a fraction of a second, kicks her leg sideways into the air. Without bending her knees she catches her leg, pulls it against her body, and holds it there with natural ease.

The dancers exit the stage, the music fades, the curtain begins to drop—but like a sculpture, Ms. Zhou-Galati’s leg remains a frozen picture of elegance.

Over the years, Ms. Zhou-Galati has spent countless hours perfecting technical poses such as this. She wears out at least 10 pairs of dance shoes during a performance season.

The NTD Television dance competition is the only international, independent platform for classical Chinese dance. Unlike dances in many programs, the competition consists mostly of solos and occasional duets. But it shares the same mission: to revive a culture that was suppressed and very much destroyed during more than 60 years of communist rule, especially during the Cultural Revolution.

Like many other Chinese legends, Mulan is a famous Chinese story that is passed down to teach moral lessons, such as filial piety.

“Mulan is about courage,” she added, believing that the Chinese people would not have as strong an understanding of courage without Mulan’s story.

Ms. Zhou-Galati said there is nothing she would like to do more than “preserving and giving this wonderful culture to the world.”

“It is very important for the Chinese people,” she said.

She said she feels that this is her calling, and cherishes the opportunity to take part in an important mission.

“I hope we can bring this back to China one day and perform there,” she said.