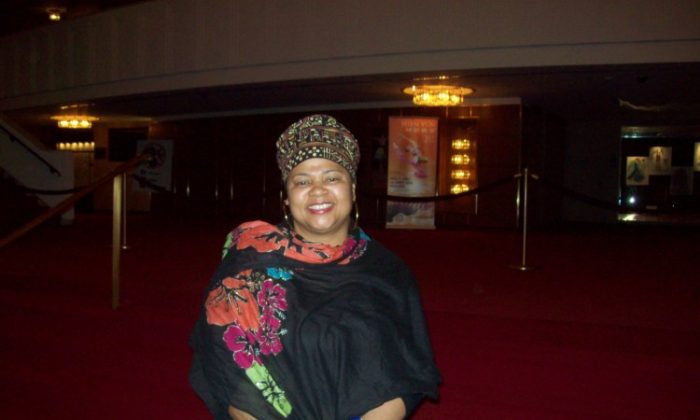 Ms. Valerie Willis, a student at Howard University School of Divinity, said she believed Shen Yun performers were "connected to the divine" after seeing Shen Yun at the Kennedy Center Opera House. (The Epoch Times)
News

“The costumes—brilliantly, vividly constructed, vibrant colors and they just meshed well with the concept of the composition of the dance,” said Ms. Valerie Willis, who dances and has done choreography. “The dancers were really beautiful—the grace, the intonation of their body movement—and they exaggerated when they needed to just so you could understand the whole meaning of the composition.”

Based in New York, Shen Yun strives to present the 5,000-year-old divinely-inspired Chinese culture to audiences around the world after communist rule in China nearly destroyed it, according to the company’s website. At the heart of a Shen Yun performance is classical Chinese dance, one that “is rich with expressive power” and “built upon a deep foundation of traditional aesthetics.”

One of the dances that particularly stood out for Ms.Willis was Qing Imperial Guards.

]Based in China’s final dynasty, founded by the Manchurians, a north ethnic group, the dance is set “in the crisp air of a snow-dusted courtyard,” where “imperial guards wield fans as weapons, embodying a spirit of strength, dignity, and refinement,” according to the program book.

“The warriors of the temple, that was awesome, how they were agile,” said Ms. Willis.

Ms. Willis has played piano and sung since she was a child. She noted Shen Yun’s unique orchestra, which combines both Western and Eastern classical instruments.

“The musicians were great; you could hear every note” she said. “Every instrument has its own voice.”

[adTraditional Chinese culture was greatly influenced by the three main religions of Buddhism, Taoism, and Confucianism, according to Shen Yun’s website.

“Under the influence of these faiths, Chinese culture has spawned a rich and profound system of values,” states the website. “The concepts of ‘man and nature must be in balance,’ ‘respect the heavens to know one’s destiny,’ and the five cardinal virtues of benevolence, righteousness, propriety, wisdom, and faithfulness (ren yi li zhi xin) are all products of these three religions’ teachings. These principles have constantly played out over China’s 5,000-year-long history.”

For Ms. Willis, a student at Howard University School of Divinity, the connection to the divine throughout the performance was “aesthetically pleasing.”

“Being a worshiper to God, able to do prayers, able to meditate, that connects me to something that is other than human in a different realm,” she elaborated.

Shen Yun’s artists follow an ancient tradition in Chinese history—one of pursuing inner beauty in order to portray outer beauty, according to a video on the company’s website.

“Throughout Chinese history, the fields of medicine, astronomy, dance, music, painting, military tactics, literature, poetry, the culinary arts, construction, and other cultural displays have been guided at their highest levels by Buddhist or Taoist cultivation or by Confucian philosophy,” states the website. “They are not limited to tangible objects or visible skill.”