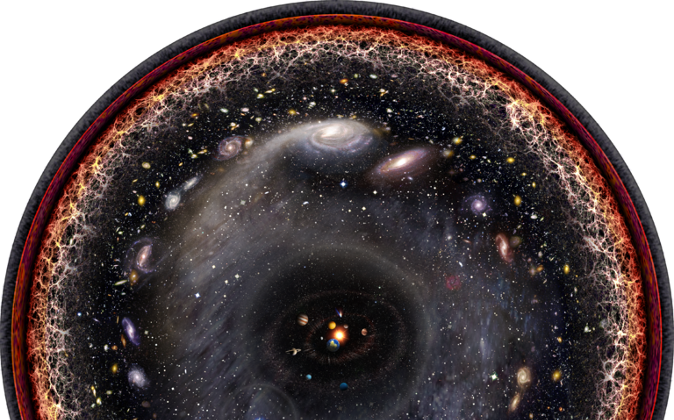 The breathtaking image above is a logarithmic image of the entire known universe, an image created and uploaded to Wikipedia Commons in 2013 by musician and artist Pablo Carlos Budassi.

For those who aren’t familiar with the term logarithmic, logarithmic maps are maps where the axis increment increases by magnitudes of 10. So visualize a ruler, but with the labels 0.001, 0.01, 0.1, 1, 10, 100, 1000, and more at every inch. Therefore, they are a great tool for representing the universe, something that is infinitely expansive. Budassi used logarthmic maps of the universe put together by Princeton University researchers.

So where did the inspiration for creating something like this come from?

As it turns out, Budassi told Tech Insider, “When I was drawing hexaflexagons for my sons birthday souvenirs I started drawing central views of the cosmos and the solar system,” according to an email. “That day, the idea of a logarithmic view came and in the next days I was able to [assemble] it with Photoshop using images from NASA and some textures created by my own.”

Finally, keep in mind that this an image of the observable universe and our solar system is in the center because it is looking at things from our vantage point.