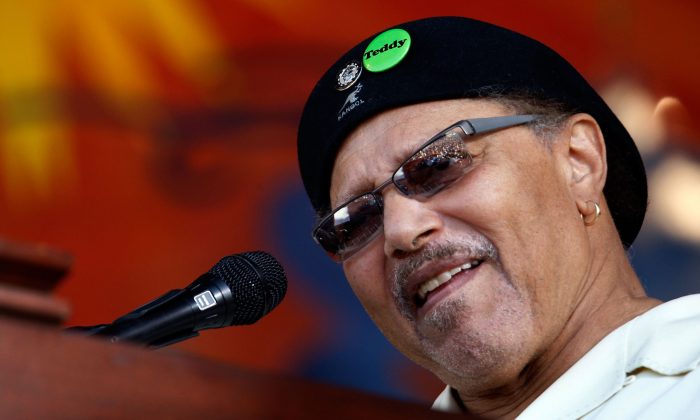 Art Neville sings with The Neville Brothers during the New Orleans Jazz and Heritage Festival at the Fair Grounds Race Course in New Orleans, Louisiana, on May 4, 2008. (Chris Graythen/Getty Images)
Entertainment News

Arthur Neville, Member of Neville Brothers, the Meters, Dies at 81

Arthur Neville, the founding member of The Meters and the Neville Brothers, has passed away at the age of 81, according to multiple sources.

Arthur Neville, born Arthur Lanon Neville on Dec. 17, 1937, was drawn to music at a very early age and graduated from Walter S. Cohen. During his time at the high school, he hung out with the future members of the Hawketts, a band he joined back in 1953. He recalled in an interview on the Radio Show “American Routes” that the Hawketts wanted to recruit him, The Star reported.

“I don’t know how they found out where I lived. But they needed a piano player. And they came up to the house, and they asked my mother and father could I go,” Neville recalled.

Together, with his band, they sang a remade version of an old country song called “Mardi Gras Mambo,” with Neville as the lead vocalist. This was the song that launched the Neville’s into the spotlight.

The local DJ Jack the Cat at the time heard their performance and convinced the band to record the song on his radio station. Neville recalled that he was more than happy to do the recording of the song, but never had he thought that it would last until now, according to Nola.

“I was so happy to record,” Neville said during an interview back in 2013. He said that at the time, the song they sang that Jack the Cat recorded was precisely what they had in mind. “It sounded good to me, We cut it in the station, with two or three microphones. I knew it felt good to do it. But I had no idea that it would still be around.”

He recalled that after his recording with Jack the Cat, it made him famous in school, according to an interview with The Associated Press back in 1993, The Star reported.

Neville eventually went to serve in the military, which included two years on active duty. He also had a job as a cook for three months during his time during at sea on the aircraft carrier U.S.S. Independent, according to Nola.

Later on, between the 1950s and the 1960s, Neville recorded several songs, some of which ended up being timeless classics, including the song, “Cha Dooky Do” and “All These Things.”

According to The Star, the Neville brothers got together and formed a band. They had sung together as kids, but each went their separate ways. This would the first time they recorded a song as brothers together. And in 1978, the Neville Brothers were founded by the four brothers, Arthur, Charles, Cyril, and Aaron Neville. Together, they performed at various festivals as the closing acts—the annual New Orleans Jazz and Heritage Festival in particular.

Before the founding of The Neville Brothers, Arthur and his two brothers, Cyril Neville and Aaron Neville, along with four other New Orleans musicians got together to form The Meters. The Meters were one of the American Funk bands of around that time who paved the roads for future groups. The Meters, according to The Star, was cited by later musicians as an influence.

They’ve had their fair amount of songs, as well as tours. In March 1975, Paul McCartney, who was a fan at the time, even invited them to play at his party on the Queen Mary ship. The gig was a celebration for his own album called “Venus and Mars.” The performance on the Queen Mary ship became a live album.

Although the band’s had a few tours, The Meters experienced their fair share of tragedies. They did not see much commercial success, and that caused a rift between the band members. Although the commercial failure was one of the reasons for the band drifting apart, it wasn’t the only one. There were conflicts between the members on a personal level as well as substance abuse.

“We had some tragedies happen with the group. Blame on who you want to, it don’t make any difference,” Neville said. “Because we didn’t have the wisdom that Mick Jagger or Paul McCartney had. ‘It’s New Orleans, man. Let’s have fun.’ I had fun doing all of it.”

They’ve had much more success as the “Neville Brothers,” and achieved even higher acclaim—performing live, featuring in shows, and other gigs. Neville won a Grammy with the ‘Neville Brothers’ and sought out other projects. The Neville Brothers could not reform after the death from cancer of Charles Neville. However, they made their mark on the world as well as influencing many artists that followed them.

Neville announced his retirement from the music industry in December 2018, citing longstanding health issues. Although people were looking forward to seeing him play again, his health issues did not allow him to do so. Following his announcement, he spent his time in the company of family and friends at home.