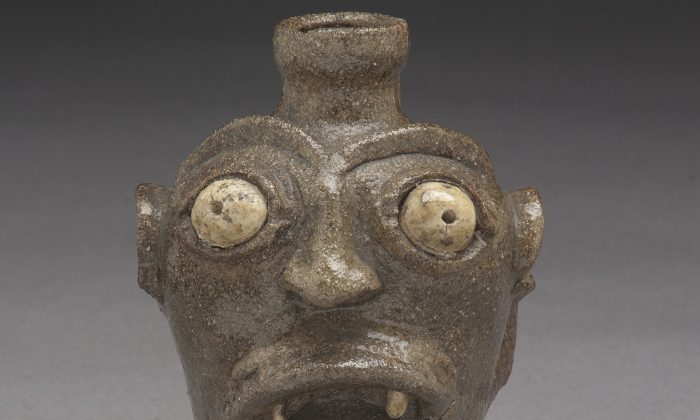 A small stoneware jug, unique among Edgefield face jugs, roars its defiance in the face of slavery. Such art preserved Kongo religious and spiritual beliefs in a coded form beyond the understanding of white Southern planters. (Courtesy The Chipstone Foundation)
Art Speaks

Robert Farris Thompson could not have said it better. Thompson is the Colonel John Trumbull Professor of the History of Art at Yale University.

He was speaking of stoneware face jugs that were made in the Old Edgefield District of South Carolina shortly after the arrival of some two hundred enslaved Africans, mostly from the Kingdom of Kongo, in 1858.

The jugs began to appear in collections and museums at the turn of the 19th century. At that time ceramic historian Edwin Barber interviewed former pottery owner Col. Thomas Davis who told him that the slaves in his pottery at Bath, S.C. made the jugs in their own time.

The jugs continued to be aggressively acquired by ceramic art collectors and museums paying upward of $65,000 for these unique pieces. Despite this interest, it was not until the late 1900s that researchers began to seriously question the purpose for which these vessels were made. Visionaries such as Robert Thompson from Yale, Regenia Perry who staged an early exhibit of face jugs in Charleston, and later John Vlach of Georgetown University, who made the association between the jugs and the ritual Nkisi fetish figurines of the Kongo.

It was long thought by early researchers that the southern slave system successfully stripped newly arrived Africans of every vestige of their homeland culture. African languages were forbidden, jewelry, clothing items, symbols of distinction such as canes were taken and destroyed.

It is now understood that this effort to create a dependent drone-like workforce largely failed. The Edgefield face jugs are seen as a great example of this failure.

Africans in the potteries used the materials at hand to create containers, face jugs, designed to serve the same purpose as magical containers used for ritual purposes in the Kongo.

These ranged from wooden fetishes with hollowed areas, to unglazed ceramic vessels, to raffia bags. Each contained magical substances collected by the tribal priest or nganga that captured energy to be used for benign or malign purposes.

The latest research now identifies many of the Edgefield jugs as used for exactly this purpose. A prime supporter of research in the field, The Chipstone Foundation of Milwaukee, WI, has collected one jug with uncharacteristically blackened eyes. On its back are written the words “Squire Pofu.”

Squire was a common first name of the time in both black and white communities. “Pofu” has been identified as the Kikongo word for “Blind.” Leading Kongo researchers identify the jug as the first appearance of Kongo language on an American made jug.  The jug may have protected someone from blindness, or perhaps caused it.

A few anthropomorphic vessels were made in Edgefield prior to 1858, these were not face vessels and are confidently attributed to white potters, in particular Thomas Chandler who apprenticed under the Remmey Pottery of Philadelphia where skills and traditions were of European origin.  Chandler’s Edgefield pottery made a water jug bearing his name and with a grinning face with European features with no white kaolin clay inserts.

It was only after the illegal importation of the Kongolese Africans in 1858 that the African style face vessels began to appear. According to researcher April Hynes, of Philadelphia, most of them were people who were practitioners or at least knowledgeable of Kongo spiritual traditions.

Archaeologists now think that two hands may have made the jugs. The first archaeological evidence of their manufacture was found near Trenton, S.C. in 1996 and analysis of broken jugs indicates that a practiced “turner” may have made the jug and a separate artist then fashioned the facial features.

The Trenton find shows that more than one pottery produced the jugs. A recent exhibition of 23 vessels by the Milwaukee Art Museum clearly demonstrated that several styles of Africanized faces were made. Clearly, more than one artisan was familiar with this “conjuring” tradition.

Hynes’s research connects the jugs with local “conjuring” traditions. Interviews with descendants of the original 1858 Africans reveals their use for protection of households and graves.

As ceramic art, the Face Jugs of Edgefield, S.C. stand alone as powerful expressions of purely African tradition.  They speak to us, proudly, and loudly, of a people’s refusal to abandon their roots and their cultural traditions in the midst of the extreme constraints of southern slavery.

Mark Newell is a writer, anthropologist, and award-winning graphic artist with an interest in the history of art and especially the Medieval and Renaissance periods.  He can be reached at marknewell@mac.com