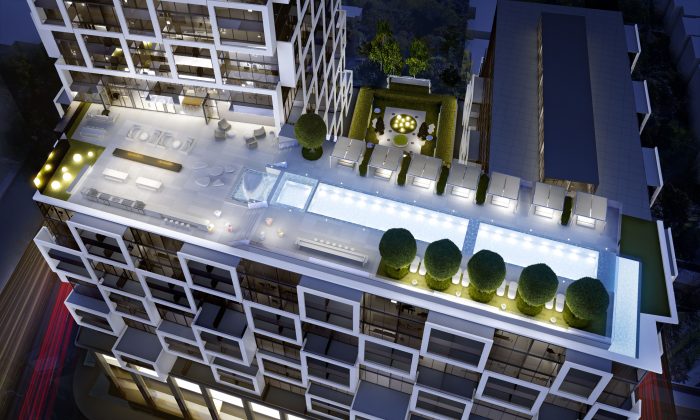 Another view of the terrace. (Freed Developments)
Canadian Content

Art Shoppe Lofts + Condos Lives up to its Name

“This is the most significant real estate play in the city I can remember for a long time,” Ryan Rabinovich, vice-president of sales for Freed Developments, tells Epoch Times during an interview at the sales centre for Art Shoppe on Yonge Street just south of Eglinton.

The project will have a 28-storey tower on the north side of the property, at Soudan Ave., featuring one of the Lagerfeld-designed lobbies. The development steps down to a 12-storey mid-rise loft building at the south end of the site, on Hillsdale Ave., with the other lobby by Lagerfeld.

Working in conjunction with Art Shoppe’s design teams at architectsAlliance and Cecconi Simone, Lagerfeld will oversee the selection of features, finishes and furnishings of the spaces.

“It will create an unbelievable value-add for the residents of the building,” Rabinovich says. “They will literally walk through a gallery designed by Karl Lagerfeld. How many buildings in Canada can say that? None.”

Suites at Art Shoppe Lofts + Condos will range from studios to one- and two-bedroom units, with 25 percent of the product two-bedroom, catering to end users. Prices start in the low $200,000s. Occupancy is slated for 2019.

Units will have ceilings as high as 10 feet, with floor-to-ceiling windows and engineered hardwood flooring.

Art Shoppe will offer a multitude of amenities, including a double-height fitness centre; indoor/outdoor yoga room and juice bar; party room with chef’s kitchen; a bar, dining area, and lounge; screening room and children’s club; and a wine-tasting room with private wine-storage lockers. The building will also have 24/7 concierge service and underground parking.

Lagerfeld collaborations aside, Art Shoppe’s big conversation piece will be its rooftop terrace, with a linear infinity pool and great views of the city skyline beyond. “When you picture the best lifestyle amenity in Miami,” says Rabinovich, “you’re talking about the pool on the rooftop of the loft building at Art Shoppe.”

With cabanas on one side of the pool and day beds on the other, the rooftop space is designed to facilitate interaction between residents and guests. “Everything funnels back to making it a community rather than just another condo building with a revolving door.”

Also kind of a big deal will be the two floors of retail on Yonge Street at the base of the development, which, if all goes as planned, will include a large grocery store on the second level, with cafes, restaurants, and boutique shops at street level.

“We want to encourage pedestrians to walk farther south on Yonge and experience the feel of the more residential part of this neighbourhood,” says Rabinovich.

To further enhance that connection, the development will include a linear park running along the east side of the building, a mid-block path from Soudan to Hillsdale.

Art Shoppe will tie in nicely with the transformation taking part all around Yonge and Eglinton, which was a bit late to Toronto’s condo boom but has been making up for lost time in recent years with a host of high-profile projects under development (including Freed and CD Capital’s other condo, 155 Redpath).

All of it’s being built in anticipation of the new Eglinton Crosstown LRT line currently under construction, which will bring significant change to the area.

“The Yonge and Eglinton of tomorrow will be very different from what it is today,” notes Rabinovich.

A former sales representative with Cresford Developments who spent years selling real estate at Yonge and Bloor (like Cresford’s CASA condos and The Bloor Street Neighbourhood), he sees commonalities between Yonge and Bloor a decade ago and Yonge and Eglinton today.

With residential population growth in the area spurring the creation of new office space and retail offerings at the future junction of two major transit lines, Yonge and Eglinton is poised to be “the next Yonge and Bloor,” he notes.

Freed Developments enjoys strong, enduring relationships with Chinese brokers and buyers, Rabinovich says, and Art Shoppe Lofts + Condos “checks off of a lot of the boxes” on their must-have lists: a Yonge Street location, iconic architecture and design, and ample amenities.

“The Chinese community doesn’t mind paying a bit more if they see real value for the dollars they spend,” he points out. “At Art Shoppe, we think they’ll be getting more than what they’re paying for.”