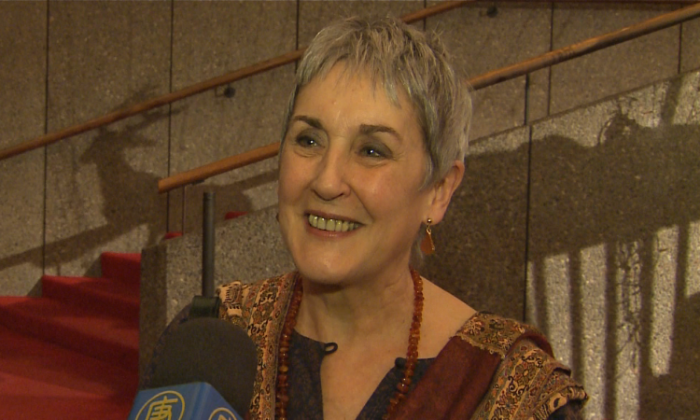 OTTAWA, Canada—University of Ottawa art history professor Maureen Korp attended Shen Yun Performing Arts for the fifth time on Thursday night and said she appreciates something different about the show every time she sees it.

“Each year there has been something particular that I’ve seen that I have liked. [This year] I really liked the dance sequences,” she said after the opening-night performance at the National Arts Centre.

Ms. Korp is an author, lecturer, and independent curator, and has taught undergraduate and graduate courses in the history of art and religions in Canada and around the world. She has published over 70 articles and three books and has made contributions to CBC radio and film documentaries.

“The way the dancers portrayed themselves as warriors with their shields, I thought the choreography with the shields was just spectacular and I liked the integration of the backdrop,” she said.

Shen Yun’s collection of mini-dramas that play out on stage uses the medium of classical Chinese dance or ethnic and folk dance..

New York-based Shen Yun is the world’s premier classical Chinese dance and music company. According to its website, the company aims to revive 5,000 years of divinely inspired Chinese culture, through the performing arts.

Ms. Korp said Shen Yun presents an integration of art and spirituality, which was the standard for all high-level art forms for thousands of years.

“My area of study is the interrelationship of art and religions, so I know very well that until fairly recent times, say 500 to 600 years, in many languages of the world there were not different words for art and religion—there was usually just one word and it meant vision,” she said.

“So the overlap between art and religion to me is integral and the separation of it is a modern phenomenon.”

According to the website, a performance by Shen Yun is a presentation of traditional Chinese culture “as it once was”—a study in “grace, wisdom, and the virtues distilled from the five millennia of Chinese civilization.”

The company was formed in 2006 by a group of Chinese artists who were determined to revive traditional Chinese culture and art forms, which had been eroded to the point of extinction under the Chinese Communist Party.

Ms. Korp said the integration of Shen Yun’s trademark digitally animated backdrops and the choreography was very effective in bringing the stories to life.

“The integration of the architecture of the backdrop with the way the dance was worked on the stage in front I thought was very tight,” she said.