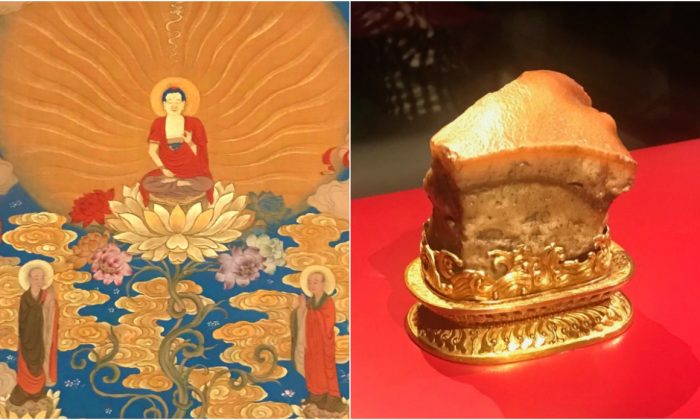 A collection of China’s finest art will continue to be displayed in Sydney despite a formal protest by the Chinese consulate.

The exhibition, called Heaven and Earth in Chinese Art, hails from Taiwan’s world renowned National Palace Museum (NPM) and is the first collaboration between the NPM and an Australian cultural institution—a partnership the Chinese regime is unimpressed with.

According to The Australian, Chinese consulate officials in Sydney met with New South Wales Arts Minister Don Harwin at his ministerial office on Jan. 9, and questioned the minister’s decision to host the exhibition and why the Art Gallery of NSW was dealing with Taiwan.

OPENS TODAY: ‘Heaven and earth in Chinese art: treasures from the National Palace Museum, Taipei’. A rare opportunity to see some of the highest artistic achievements across 5,000 years of Chinese history. Book now: https://t.co/iIQp8agv0v #heavenandearth2019 pic.twitter.com/sV4CLi8nhU

A spokesperson for Harwin confirmed there was a meeting but no request from Chinese consulate officials to stop the exhibition.

“The minister met with … Gu Xiaojie, consul general PRC in early January. At no stage was a request made for the minister to intervene and stop the exhibition from proceeding,” the spokesperson said in an email.

No further details regarding the discussions between the arts minister and the consul general have been provided.

The consul general is also believed to approach the NSW Art Gallery, which caused considerable consternation among gallery management, according to The Australian.

NSW Gallery Director Michael Brand declined to discuss details of the meeting and told The Australian that gallery staff “liaised with many stakeholders about [its] exhibitions over many years, including the Chinese consulate general, and recently about the current exhibition of 87 masterworks.”

Immunity Against the Chinese Regime

Due to the historical sensitivities surrounding these historical items, Taiwan authorities are cautious with which country they lend the artworks to.

Parliamentary legislation titled Protection of Cultural Objects on Loan Act 2013 made the way for these artworks to be protected against seizures—potentially from the Chinese regime—while on loan in Australia.

The Act, which is also known as ‘immunity from seizure and suit,’ provides legal protection for cultural objects on loan from overseas lenders for temporary public exhibition in Australia.

According to the NPM website the museum inherited China’s national culture, which spanned thousands of years, and shoulders the responsibility of preserving these artefacts.

Most artefacts in the NPM’s collection—totalling some 700,000 pieces—came from The Palace Museum in Beijing and have survived invasions, civil wars and the infamous Cultural Revolution.

Beginning in 1931, the Kuomintang (KMT) government placed the artefacts in over 13,000 containers and shipped them to the south to avoid the Japanese Army. Later in 1948, as the KMT began losing the war with the communists, artefacts were carefully selected, placed in containers and transported to Taiwan via naval ships.

After the containers arrived in Taiwan, all artefacts, except for those from the Institute of History and Philology, Academia Sinica, were stored in a bomb-proof shelter and then opened for public display in 1965.

According to NPM, these artefacts “not only serve the purpose of verifying the legitimacy of Chinese history but are also a treasure to the art and cultural histories of mankind.”

Lending these works to Australia could be seen as part of Taiwan’s New Southbound Policy (NSP) that seeks to encourage an open and free Indo-Pacific region.

Delicious cooperation! #Taiwan and #Australia are like-minded countries enjoying exchanges across an array of areas such as culture, education, tourism and trade. We look forward to working even closer with the #NewSouthboundPolicy and #IndoPacific nation in taking ties to new heights. https://t.co/R0cbXvlus8

Launched in 2016, the NSP aims to improve Taiwan’s collaboration with ASEAN nations, South Asia, Australia and New Zealand with a goal of reducing economic dependence on the Chinese regime. It aims to strengthen economic and trade cooperation, enhance institutional, professional and academic interaction.

Despite current diplomatic limitations with Taiwan due to the ‘One China policy,’ two-way economic and cultural contacts between Australia and Taiwan have been substantiated with official visits taking place each year.

“The government encourages Australian business as well as state, territory and city governments, to pursue trade and investment opportunities involving Taiwan and supports the development of people-to-people contacts,” the Department of Foreign Affairs and Trade website said.

In a statement to The Epoch Times, Director General Constance Wang from the Taipei Economic and Cultural Office in Sydney said that the exhibition has been well received and attracted a large interest from the community.

“[The event] shows that international cultural exchange should not be stopped by any political interference. It should be based on the promotion of human civilisation and this is also the standpoint that any future events will take to promote bilateral exchange between Taiwan and Australia.”

According to the Art Gallery of NSW, the NPM in Taiwan “holds one of the finest collections of Chinese art in the world.”

“This is the first time the collection has travelled to the southern hemisphere and it is unlikely to be seen in Australia again. The Art Gallery of NSW in Sydney is the exclusive venue,” the art gallery’s website said.

“A rare opportunity to see some of the highest artistic achievements across 5,000 years of Chinese history.”

Epoch Times reporters Luo Ya and Melanie Sun contributed to this report.