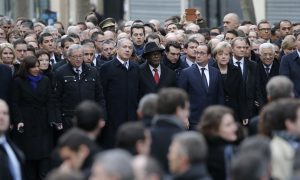 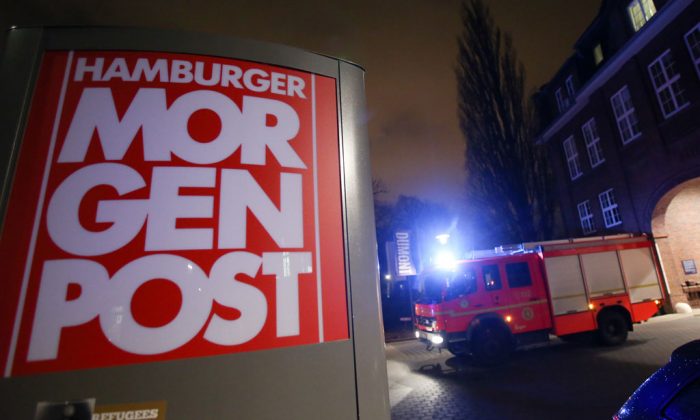 A firef truck sits outside the building of the 'Hamburger Morgenpost' in Hamburg, northern Germany, Sunday morning, Jan. 11, 2015. According to police fire broke out in an archive room of the paper after an arson attack. The newspaper ran caricatures of the Charlie Hebdo newspaper after the attack on Wednesday. (AP Photo/dpa, Bodo Marks)
Europe

BERLIN—Police in Germany have detained two men suspected of an arson attack early Sunday against a newspaper that republished the cartoons of French weekly Charlie Hebdo.

The newspaper Hamburger Morgenpost said on its website the overnight arson attack destroyed several files in its archive, but didn’t injure anyone.

Hamburg police said it had detained the two young men near the newspaper building.

Police spokeswoman Karina Sadowsky told The Associated Press several stones and a Molotov cocktail were found in the newspaper’s archive in the basement of the building.

She didn’t identify or give any further details about the suspects.

A spokesman for the Hamburg fire department said they were first alerted when a security company called them after the building’s fire alarms went off, shortly after 2 a.m.

The Hamburg tabloid newspaper published the Charlie Hebdo cartoons the day after the attack against the newspaper in Paris to express its solidarity with the slain journalists.

Several other national and local German newspapers also published the cartoons. They are now getting police protection.

German Interior Minister Thomas de Maiziere on Sunday called on all citizens to be vigilant in their everyday lives in response to the attacks in neighboring France.

From The Associated Press. David Rising contributed to this report.