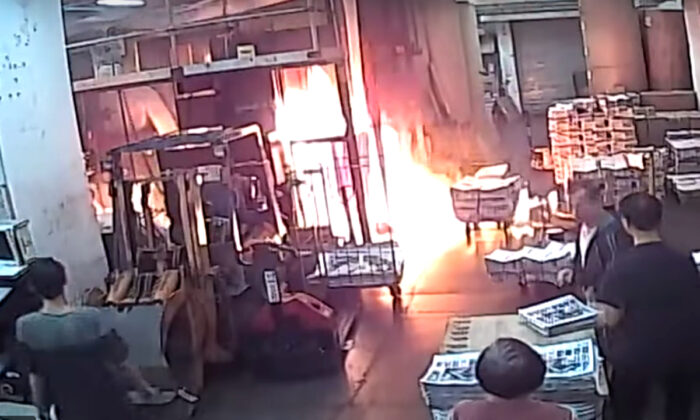 Staff at the print shop that prints the Hong Kong edition of The Epoch Times react to a fire started by four masked men on Nov. 19, 2019.
Viewpoints

As the Chinese Communist Party (CCP) has demonstrated throughout the Hong Kong pro-democracy protests, the suppression of liberty and the imposition of a police state comes in several short and often violent stages.

First, there was just tear gas leveled against the pro-democracy students protesting in the streets of downtown Hong Kong. Some of the protesters were arrested. Occasional public beatings by uniformed Hong Kong police often preceded arrests. And, according to Amnesty International, private beatings and torture sometimes followed arrests.

Along with that came the beatings of the unarmed protesters in subway stations by gangs of masked thugs that may or may not have been Hong Kong police. Press reports have identified them as members of organized crime. Then the gunshots began, followed by the shooting in the chest of an unarmed young man at close range in broad daylight.

The focus of these attacks, tortures, and shootings has, until very recently, been mainly focused on students and other participants of the street protests. That’s not surprising. Crowds of anywhere from 100,000 to two million or more protesting the CCP’s authoritarianism provide the Hong Kong police and other proxies ample opportunities to abuse their people.

But things have changed. Like the thug regime in Moscow, the CCP is now targeting not just those who speak the truth about them, but those who write about it, too.

Arsonists Attack on The Epoch Times an Epic Failure

At about 3:40 a.m. on the morning of  Nov. 19, four masked men dressed in black—two were armed with batons—entered The Epoch Times printing facilities in Hong Kong. As the CCTV camera footage clearly shows, the men proceeded to make their way into the area of the printing presses.

When an employee confronts them, it appears that he was verbally threatened by the thug in charge. The employee then raises his hands above his head, signaling his surrender. Immediately thereafter, another thug splashes a clear liquid on the floor and printing machinery, touches it with a lighter, immediately after which, it explodes into flames.

Shortly thereafter, the arsonists leave, likely thinking that the place will surely burn to the ground. But within minutes, courageous employees quickly extinguish the fire. Watch CCTV footage of the arson attack against The Epoch Times here.

Thankfully, no one was seriously injured or even killed during this cowardly act. Put into its proper perspective, when they’re trying to burn your place to the ground, you know you’re having an impact. When they fail to accomplish even that, you know that you’re winning.

The Truth Is an Enemy of the State

Their reason for attacking The Epoch Times printing presses couldn’t be clearer: The Epoch Times tells the truth. Truth has been the enemy of every despotic regime since the beginning of time. That remains true today.

What also remains true is that you can’t kill the truth. Ever. It can be hidden, but only for a while. It can be twisted, but sooner or later, that, too is eventually seen for what it is. Ultimately, the truth always reveals itself, and in doing so, reveals us all.

By attacking The Epoch Times, the tyrants in Beijing have only succeeded in revealing their deepest fears, while elevating the publication and enlarging the message it carries within its pages. Flames can’t destroy the truth, quite the contrary: the truth enflames humankind to throw off the chains of oppression. That explains the arson attack, and reveals the rudimentary thinking behind it.

The eternal truth that the Communist Party members in Beijing can’t seem to grasp is that truth is eternal. The truth, no matter how it’s suppressed, or how much those who seek it, write it or speak it are attacked or abused, silenced, burned, disappeared or even killed, never ceases to exists.

A Reminder of the Most Powerful Force on Earth

“The pen is mightier than the sword,” is an old, familiar aphorism in the English-speaking world. It’s so powerful because the truth flows from the pen, not from a sword. And despite Mao Zedong’s assertion that “power flows from the barrel of a gun,” it is only a temporal power, hollow, lifeless, and overcome by simple words that tell the truth. The truth is lighter than air and yet possesses of a gravity greater than any state edict and more powerful than any machine of war.

The attack on The Epoch Times reminds us that words are the most powerful things in the world because they carry the truth, and the truth is all powerful. Indeed, the entire foundation and history of the world as related in Judeo-Christian doctrine is found in the Word of God. Not the sword of God, not the AK-47 of God, but His Word, because that’s where the truth is found.

Of course, words can be weapons as well, and often are. The CCP relies on the lies of propaganda to enslave the minds of its people. But even that false doctrine eventually fails. Words that boldly proclaim the truth, however, that shine the light of day on the agents of darkness, are the most severely feared by tyrants. And those that cut through the despicable lies faster than any blade is what the Party fears the most.

And fear they should. After all, what could an obscene government such as the one in Beijing, that is built upon the most profane of lies for the express purpose of oppressing over one billion people, fear more than the truth?

That’s why the Chinese Communist Party fears The Epoch Times; we have truth on our side.