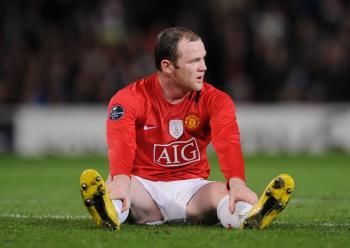 United went down a goal in front of their home crowd after a sweet strike from Arsenal’s Andrei Arshavin late in the first half, before clawing their way back to victory with a some good fortune.

Wayne Rooney scored on a penalty kick, which he won after it was ruled that Arsenal’s goalkeeper Manuel Almunia made contact with him.

United’s second goal was an Abou Diaby own goal, which came when he surprisingly headed into his own net from a Ryan Giggs free kick.

Wenger thought his side had equalized but when he realized the goal was dismissed due to an offside, he reacted by kicking a water bottle on the touchline and was then ordered to the stands by referee Mike Dean.

Man-of-the-match Wayne Rooney said afterwards in an interview with Sky Sports, “I thought we were much better in the second half. Arsenal had a lot of possession in the first half but didn’t really hurt us—apart from the goal.

“The second half we knew we had to be better and thankfully we were.”

Commenting on the penalty Rooney said, “I tried getting on the end of the ball and I’ve done so and the goalkeeper took my legs from me.”

Rooney was pleased with his team’s performance, “Last season our record against the big teams wasn’t great and Arsenal have started the season well, so we needed to win today.”

Wenger summed up his team’s performance when he said in a post-match interview, “When you play a game like that and go home without any points, that is frustrating.”

Ferguson was obviously more upbeat. “One down at halftime, it’s always an uphill task against a team of Arsenal’s capabilities. We had to dig deep and I think in fairness we really did perform well in the second half.”

Both teams are trailing behind London teams. Tottenham and Chelsea top the Premier League table with 12 points from four games. Both teams as well as Manchester City remain unbeaten this season.

Manchester City won 1–0 on the road against Portsmouth as former Arsenal striker Emmanuel Adebayor scored his third of the season in Sunday action.

The Manchester teams are in third and fourth place respectively. United is ahead of City on goal differential, although they’ve played one more game.

Chelsea put three more points on the board as they eased past Premier League newcomers Burnley 3–0 at Stamford Bridge on Saturday.

Tottenham secured second place (on goal differential behind Chelsea) when Aaron Lennon scored the winner in injury-time for a 2–1 victory against a defensive-minded Birmingham.

The Premier League resumes on Sept. 12 after the World Cup qualifiers.