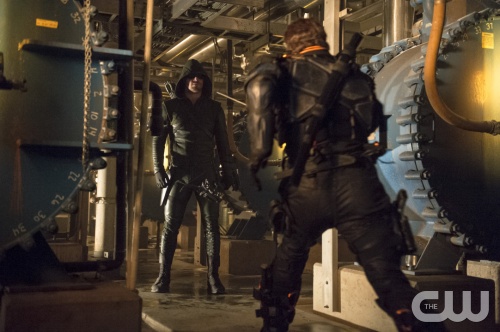 Arrow season 2 ended on several stunning notes, the most fulfilling of which was Oliver finally telling Felicity that he loves her–although it turned out to be part of his plan to defeat Slade.

Now it seems that the show is casting for a character who in season 3 will be Felicity’s new love interest, perhaps stirring more jealousy from Oliver–Stephen Amell told CelebTV earlier this month: “I’ll tell you what — whether or not that was a ruse, a bait-and-switch, he really meant it — we’re gonna find out very early on in Season 3 if he actually meant it.”

The new character, “Daniel,”–perhaps a fake name–will be a 20-something handsome, enigmatic, and highly intelligent entrepreneur developing groundbreaking technology.

“Though exuding charm and confidence in public, he privately harbors a tragic past that will drive him to become a tech-powered superhero. Watch for this formidable fella to be a love interest for Felicity and a rival of Oliver’s – both personally and professionally,” according to TVLine, which obtained the news.

The other casting calls are for “Seth,” an educated criminal whose knack for chemistry enables him to gain power over people by exposing them to a drug that drains their willpower; and Toshi and Akiko, who are Oliver’s teachers and handlers in Hong Kong during the new round of flashbacks.

Toshi is described as being in his late 20s/early 30s. “A well-trained operative, skilled in weaponry, combat and intelligence gathering, he is also a devoted father and husband.”

Showrunner Andrew Kreisberg previously said that there will be a shift in Oliver and the group, based on Laurel.

“It totally changes everyone’s dynamic, having Laurel in on the secret. She has become so much more. Look, I don’t think it’s any big surprise that we’re struggled in places with Laurel as a character — through no fault of Katie Cassidy, who plays her wonderfully and does everything we ask of her — but ever since she found out, it’s just changed the dynamic, and it’s made the show a lot more fun and enjoyable to write,” he told IGN.

“So her storyline in the finale is much closer tied to her father and Sarah. But especially going into Season 3, there’s a much more different dynamic in the group. It’s really fun to see.”

As for the premiere date, the first two seasons premiered right next to each other–October 10, 2012; and October 9, 2013. It’s safe to say  that the premiere for season 3 won’t be too far from this time frame.