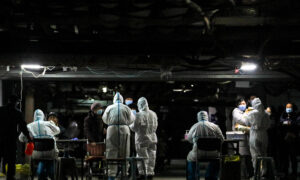 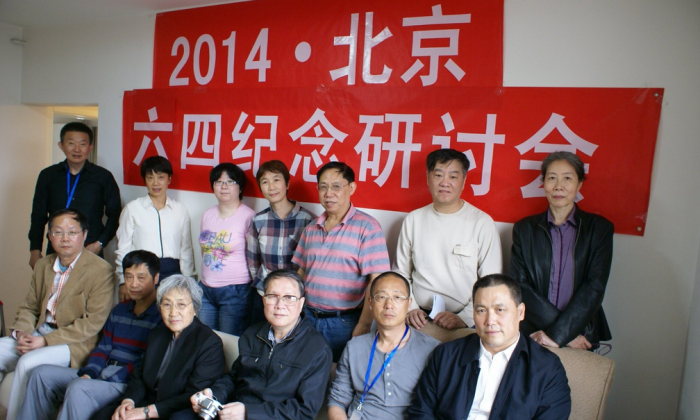 A group of Chinese dissidents, scholars, lawyers, and activists attended a seminar commemorate the June 4 movement in Tiananmen Square in Beijing on May 3. At least eight of the attendees were taken away by police afterwards. (Screenshot via canyu.org)
China

As the 25th anniversary of the June 4 movement of 1989 nears, over a dozen Chinese scholars, lawyers, and dissidents hosted a private conference in Beijing on May 3, discussing the impact of the event and the ramifications of its violent suppression, where the Chinese military opened fire on unarmed students and Beijing residents, killing hundreds or even thousands.

Not long after the seminar was over, at least eight of the attendees were reported to have gone missing, or been summoned by the police — including well-known rights lawyer Pu Zhiqiang, whose house was raided by officers.

The seminar was hosted at the home of an attendee in Beijing; a banner hung on the wall said: “2014 Beijing June 4 Anniversary Seminar.”

At the seminar, attendees recalled the violent suppression of the June 4 movement of 1989, and called for revealing the truth about the incident. They called for redress for the killings and compensation to the victims’ families. Four scholars and dissidents who were unable to attend sent written remarks.

Among them, Guo Yuhua, Cui Weiping, and Qin Hui have been released, but the other five are still out of reach.

Pu Zhiqiang was taken away by security forces at 11 p.m. on Sunday, after police raided his home and confiscated his cell phone, computer, and some books.

Last month, the well-known independent journalist and political analyst Gao Yu was also reported to be missing, after she failed to show up at a scheduled event in Beijing on April 26.

Chinese Communist Party authorities have since the massacre blocked civil activities of remembrance — though this year the suppression seems to be particularly acute.

Ding Zilin, one of the members of Tiananmen Mothers, whose 19 year-old son was shot dead, is being prohibited from staying in Beijing before June 5 this year, according to Voice of America.

Ding said that it’s the first time in 25 years that she has been ejected from the capital.

The June 4 movement was a student-led series of street protests and political demands, including the occupation of Tiananmen Square in Beijing in April, May, and early June 1989. Hundreds of thousands of students, and then other Chinese, including workers, joined the protests.

The Communist Party leadership decided to crush the protests, rolling in tanks and troops in the late evening of June 3 and into the early morning of June 4. The death toll has been estimated in the hundreds or even thousands.

Photos, information, and speech related to the June 4 movement is strictly censored on the Internet in China. The movement is now labeled a “student rebellion” in the state-run press, and students are not taught about the roots of the protests nor the violent end which befell them.