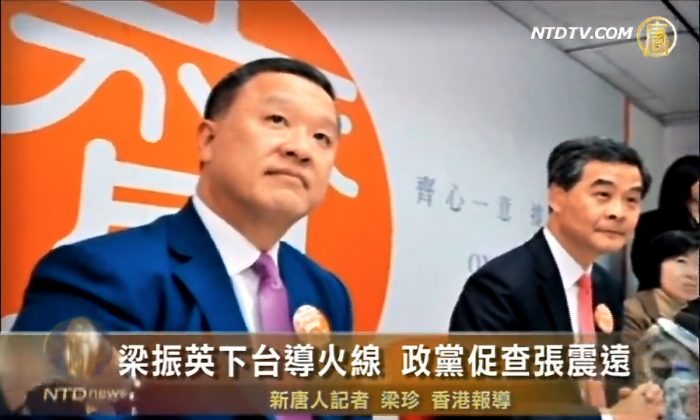 Barry Cheung (L) is pictured alongside his former boss, Hong Kong Chief Executive Leung Chun-ying. Cheung is in trouble now that an exchange he ran is being investigated for financial irregularities; the arrest of a number of people from mainland China, carrying falsified financial documents worth hundreds of millions of dollars, have added to the intrigue. (NTD screenshot via The Epoch Times)
China

Things looked bad enough for high-powered Hong Kong politician Barry Cheung on May 18, when he shut down the Hong Kong Mercantile Exchange, citing slow trading and insufficient revenue. Days later authorities referred the matter to the police, citing possible “serious” financial irregularities. Now, half a dozen men and women from the mainland have been arrested in connection with the investigation, some of them holding forged financial documents worth hundreds of millions of dollars.

Cheung is a well-known figure in Hong Kong: he was top aide and campaign manager to Chief Executive Leung Chun-ying, served as head of the powerful Urban Renewal Authority, and was a director at the AIA Group Limited, a subsidiary of the American International Group, and RUSAL, the world’s largest aluminum company owned by billionaire Oleg Deripaska. Locally, he maintained the reputation of a high-flyer, spending freely on himself and zipping around Hong Kong in a red Ferrari, or sometimes a BMW 750Li, according to a financial blog.

He was also the chairman and 56 percent shareholder in the failed gold and silver futures exchange, which he’d tried to keep afloat since its financial troubles began, about a year ago. The Hong Kong Mercantile Exchange was already coming in for regulatory attention weeks before the May 18 surrender of its license, reported the Hong Kong’s The Standard newspaper.

The Commercial Crime Bureau (CCB) “then invited Cheung and three other exchange executives in for questioning once the probe was officially announced,” said The Standard.

Chueng resigned from public positions three days after the closure. Though his statements to the media refer to “helping the police with their investigations,” he is actually under police investigation, according to Apple Daily, who cited a May 24 release from the Hong Kong CEO’s office.

The Commercial Crime Bureau is now investigating possible fraud and money laundering activities, according to the Eastweek magazine.

The sparse trading on the Mercantile Exchange meant that Cheung was going into debt and borrowing money in the attempt to keep it alive. It is not clear how much Cheung personally owes, but he said he hoped to raise the US$100 million necessary to reopen the exchange by the end of June, according to The Standard.

The arrests of mainland Chinese men with fraudulent documents to the tune of HK$7.8 billion (just over $1 billion) potentially implicate Cheung in something much bigger.

Dai Linyi, Li Shanrong and Lian Chunyan, were arrested in a Hong Kong hotel, on charges of possessing false documents purporting to show they possessed or had access to billions of Hong Kong dollars. Most of the documents were in the hands Dai.

Dai Linyi is an old friend of Cheung’s, according to the Singtao Daily newspaper, who cited Hong Kong sources.

Police found 120 forged bank documents, including confirmation letters and certificates of deposit supposedly issued by Standard Chartered Bank and the Hong Kong and Shanghai Banking Corporation (HSBC). At the preliminary hearing of the three on May 31, the prosecution said the CCB seized 10 counterfeit copies of bank checks and confirmation letters issued by the Bank of China, involving from $815,500 to $3,262,000; defendant Lian Chunren was the beneficiary of the two documents.

The other two men had similar forged financial instruments, according to the authorities.

At the hearing, Dai testified that he was asked to help find “a behind the scenes investor” for an asset injection into the Mercantile Exchange.

Lian Chunren told The Sun, a Hong Kong media outlet, that he had worked for the Public Security Bureau in Beijing for a decade he became a businessman involved in fundraising for schools. He claimed his trip to Hong Kong was to drum up $11 million for school construction. He was tricked and became involved in scenario unknowingly, he said.

“This issue appears to be much more complicated than what we have seen in the papers,” said Raymond So Wai-man, the dean of the Hang Seng Management College business school, in an interview by SCMP.

“The amounts are so huge, it is probably not simply related to giving money to the Hong Kong Mercantile Exchange,” he said of the forged documents, explaining that instruments involving such large sums would normally be rigorously checked. Financial analysts are baffled by the documents, he said.

Hong Kong politicians have asked the government why they didn’t act on the HKMEx earlier, given that the regulators knew about its problems around a year ago.

Securities and Futures Commission chief executive Ashley Alder said at a meeting of the Legislative Council’s financial affairs panel on June 3: “At no stage did the SFC receive any direction or instruction from the government on how to [conduct any matter] relating to the HKMEx,“ reported The Standard. Legislators said the the SFC had documents that showed the exchange was facing financial problems as early as January.

The Democratic Party has also requested the Independent Commission Against Corruption to investigate allegations that Barry Cheung borrowed HK $70 million ($9.02 million) from a developer to prop up the Mercantile Exchange while he was chairman of the Hong Kong Urban Renewal Authority, the SCMP said.

So far, Cheung has not been charged with any crime, while questions about his dealings with the exchange continue to mount.