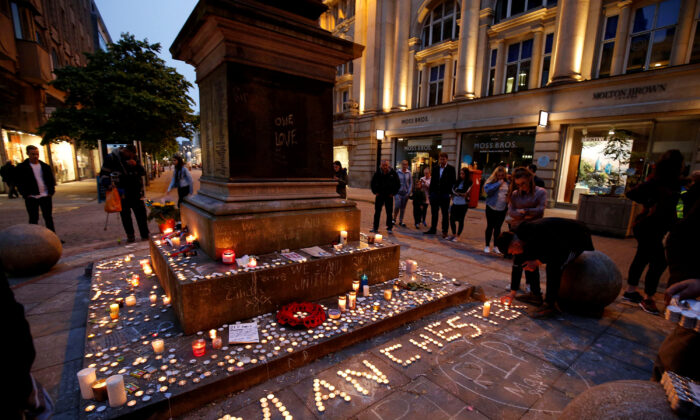 File photo showing people attending a vigil for the victims of the Manchester Arena bombing, in central Manchester, Britain, on May 29, 2017. (Andrew Yates/Reuters)
UK

A warrant has been issued for the arrest of the elder brother of the Manchester Arena bomber for failing to give evidence at the public inquiry into the attack.

Ismail Abedi, who fled the UK last summer, did not attend a hearing at Manchester Magistrates’ Court on Tuesday.

Last month the 29-year-old was found guilty in his absence of failing to comply with a notice which compelled him to cooperate with the inquiry into the May 2017 atrocity.

He faces a jail term of up to 51 weeks for the offence if he is captured or hands himself in.

Prosecutor Sophie Cartwright QC told the court that notification of Tuesday’s hearing had been sent to Abedi’s last known address.

An email was also sent to an address he had previously used to correspond with the solicitor to the inquiry as well as a message to his former solicitors, she said.

District Judge Jack McGarva said he was satisfied that Abedi was aware of the hearing and also noted that the proceedings had had a “great deal of publicity”.

Issuing a warrant without bail, he said: “We will now have to wait for him to be apprehended.”

Abedi’s brother, Salman, 22, killed 22 people when he detonated a suicide bomb at the end of an Ariana Grande concert.

The judge previously found Ismail Abedi guilty of failing without reasonable excuse to do something required by a notice under Section 21 of the Inquiries Act.

He was ordered to attend the bombing inquiry last October by chairman Sir John Saunders as he probed the radicalisation of Salman and their other brother, Hashem Abedi, 25, who was jailed for life for assisting with the bomb plot.

Ismail Abedi was stopped by police at Manchester Airport on August 28 last year and told them he was planning to return to UK the following month.

However, he caught a flight at the same airport the next day and his current whereabouts are unknown.

The inquiry also wanted to question the Chorlton IT worker about a 2015 “port stop” at Heathrow Airport when his phone was found to have a “significant” amount of “very disturbing” material exhibiting a mindset similar to that of the ISIS terrorist group.

He also had potential evidence to give, the inquiry heard, on the preparation of the Arena bomb, given his DNA was found on a hammer in a car used to store the explosives.

His father, Ramadan Abedi, was associated with the Libyan Islamic Fighting Group, a militia that had links with terror organisation Al-Qaeda, the public inquiry heard.

He lives in Libya, has also not cooperated with the inquiry, and police want to question him as a suspect.

Lawyers for some of the families said they remain “gravely concerned” about how he was able to leave the country last year.

He was listed for Thursday’s hearing under his alias, Ishmale Ben Romdhan.

Abedi has denied any involvement with the Arena attack.

He previously said he did not want to attend the inquiry because he was worried about the risk of self-incrimination, had already been questioned at length by the police, and was concerned for the safety of himself and his family.

Kim Harrison, of law firm Slater and Gordon, which represents 11 of the victims’ families, said: “We welcome the arrest warrant that has been issued for Ismail Abedi today and expect all of the relevant authorities to do their utmost to ensure he has to answer the many questions we have about what happened that night.

“We remain gravely concerned as to why Abedi was able to leave the country before giving evidence to the inquiry in the first place. His leaving the country should never have happened, and despite the conviction he is unlikely to face any real justice until he is apprehended, if at all.

“The families deserve to know the truth about what happened that night and the contempt Ismail Abedi has shown them is truly despicable. Now we expect the authorities to do everything in their power to bring Abedi to justice.”