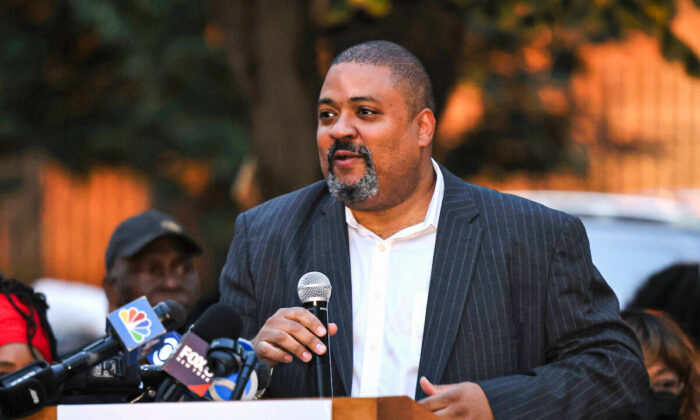 Alvin Bragg speaks during a Get Out the Vote rally at A. Philip Randolph Square in Harlem in New York City, on Nov. 1, 2021. (Michael M. Santiago/Getty Images)
Viewpoints

The case of Jose Alba, the 61-year-old Harlem bodega clerk charged with murder for defending himself against a 35-year-old convicted felon who had him cornered behind his counter, may be the case that finally topples the urban reign of the “woke prosecutor.”

Everything about the arrest and prosecution of Alba on second-degree murder charges is shocking, starting with the career and ideology of Manhattan District Attorney Alvin Bragg, who won his office in November 2021 on a platform of what progressives like to call “criminal justice reform.”

That meant declining to prosecute nearly all misdemeanors: shoplifting, disorderly conduct, drug possession, prostitution, and turnstile-jumping in the New York subways. It meant declining to seek prison sentences for nearly all felonies, with a handful of exceptions such as homicide and some sex crimes. It meant charging armed robbers with mere petty theft (Bragg backtracked somewhat on that measure, permitting felony charges to go forward if the alleged robber was carrying a gun).

It meant eliminating cash bail in most cases—although not for Alba, as it turned out, who had to spend nearly a week in New York City’s notorious Rikers Island jail because he couldn’t make an initial bail set at $250,000 (Bragg’s district attorney’s office had wanted double that). Alba, a father of three arrested on July 1, wasn’t freed until July 7, after his lawyers got his bail reduced to $50,000 on condition that he surrender his passport (he’s a Dominican immigrant, although a U.S. citizen) and agree to wear an ankle bracelet. Other New York bodega owners and workers pooled their money to raise the $5,000 cash deposit that finally freed him pending trial.

But Bragg is exactly what Manhattan’s ultra-liberal voters wanted. He got 83 percent of their votes. Both his agenda and his electoral success parallel nearly identically those of other progressive ideologues who have recently won district attorney’s races in Democratic-dominated large cities by promising to make life easier for criminals and harder for both their victims and the general public. They include Kim Foxx in Chicago in 2016 and 2020, Larry Krasner in Philadelphia in 2017, Chesa Boudin in San Francisco in 2019, and George Gascón in Los Angeles in 2019.

All, including Bragg, won office in part because of massive campaign contributions from progressive billionaire George Soros and partly due to affluent-liberal guilt over the “carceral state,” “structural racism,” and the “school-to-prison pipeline” drummed into their heads by left-leaning academics who had read too much Foucault.

The arrest of Jose Alba is a textbook case of exactly what’s wrong with woke prosecution that favors criminals over their victims. Surveillance videos at the Blue Moon convenience store on Upper Broadway where he worked show exactly what happened. You can watch and listen to the audio as the purported victim of Alba’s alleged crime, Austin Simon, with a string of arrests, including for robbery, and on parole after a 2016 conviction for assaulting a police officer, invades the bodega’s enclosed counter area to assault Alba at around 11 p.m. on July 1.

Simon’s 32-year-old girlfriend, whose name the police have not disclosed, had been trying to use her food-stamp benefits card to buy a bag of potato chips for her 10-year-old daughter. Alba’s processing machine had rejected the purchase, and the girlfriend called Simon into the store, claiming that Alba had grabbed the chips from the girl. The videos don’t show this.

What the videos do show is the muscular Simon, clad in a white Amiri T-shirt (they retail for between $350 and $450) and towering over the diminutive white-bearded Alba, as he stalks into the counter area, shoves him into a wall, and then, after Alba struggles to his feet, grabs him and shoves him down again. At this point, Alba, pinned in the tight space, reaches for a box-cutting knife on the counter and stabs Simon around the chest and neck. The girlfriend appears to fish for a knife in her purse and allegedly stabs Alba in the shoulder. Alba was arrested for murder. The girlfriend was never arrested for anything.

Liberal media, such as The Washington Post, dithered over whether Alba had a duty to “retreat”—where exactly to?—before he could legally exercise his right of self-defense. Sane people everywhere else in America, and especially in New York, reacted with outrage. Some New Yorkers publicly volunteered to sit on Alba’s trial jury and vote to acquit him. More than 20 relatives and supporters of Alba crowded the courtroom for his bail hearing, and the United Bodegas of America met with Bragg on July 11 to try to get the charges dropped. New York City’s corner-store bodegas, typically open 24 hours a day and operated by Latino and Muslim immigrants sitting alone at the counters, are sitting ducks for robbers and the unhinged.

New York Mayor Eric Adams, under fire himself as crime rages in his city (five homicides in four hours on July 13), stated: “My heart goes out for this hard-working, honest New Yorker that was doing his job in his place of business, where a person came in and went behind the counter and attacked him.”

Lately, there’s been a general public backlash against criminal-friendly woke prosecutors after violent felonies, especially homicides, brazen thefts of every kind, and general public disorder have spiked in all those cities. Even in liberal San Francisco, fed-up voters abruptly recalled Boudin on June 7, and there’s a similar campaign gathering steam to remove Gascón in November.

On July 20, a grand jury will meet to consider whether to indict Alba for any crime at all. It might be wise for Bragg to realize before the flack falls on him that victims have rights, too.