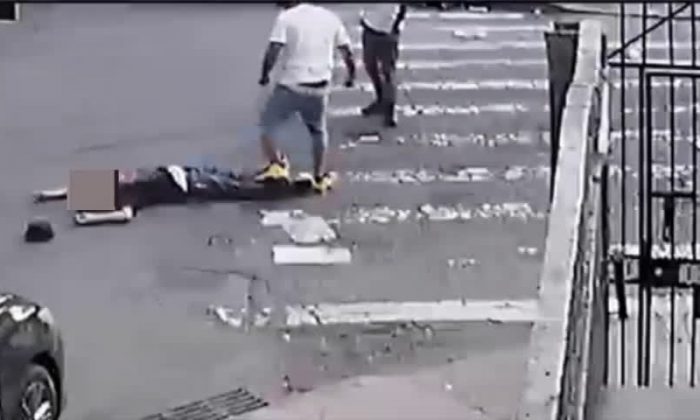 A man knocks another man unconscious at an intersection of the Bronx, New York, on June 18, 2018. (NYPD)
Crime and Incidents

Arrest Made: Attackers Come Back to Take Photos of Man they Knocked Unconscious in Street

Two men were caught on camera attacking another man in the middle of a Bronx street on the morning of June 18. A suspect was later arrested.

Video of the incident shows two men approaching the 37-year-old victim before one of them winds up and punches him in the face, knocking him down.

While he is unconscious on the ground, two other people can be seen standing around the man while another looks through his pockets. Police said they stole his cell phone and identification.

The two attackers, who were captured on video high-fiving each other as they walked away, came back and took photos of the victim unconscious in the street, police said.

A custodian at a nearby school called 911, ABC7 reports.

The incident occurred a little after 6 a.m. at Aqueduct Avenue and Buchanan Place in the University Heights neighborhood.

Police said the victim, who ABC7 reported is a father-of-three named Fernando Levano, suffered a fractured skull and was taken to the St. Barnabus Hospital in critical condition. On Thursday, NBC New York reported that he was still unconscious but in stable condition in the hospital.

Luis Rivera, 22, was arrested in connection with the attack and is charged with second-degree assault.

All calls will be kept confidential.