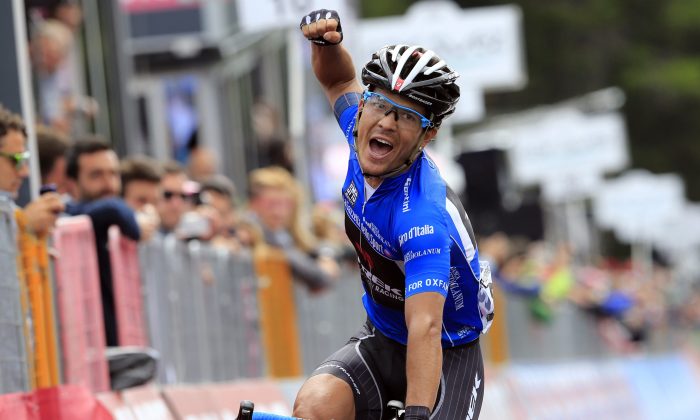 Colombian Julián Arredondo of Trek celebrates as he crosses the finish line of Stage 18 of the 97th Giro d'Italia, from Belluno to Rifugio Panarotta on May 29, 2014 in Rifugio Panarotta. (Luk Benies/AFP/Getty Images)
Cycling

Trek’s Julián Arredondo all but sealed up the King of the Mountains jersey with his win in Giro d’Italia Stage 18—The Trek rider was first over the first two climbs, then attacked halfway through up the Cat 1 summit finish to win the points and the stage.

The blue jersey is all but out of reach of Sky’s Dario Cataldo who has 87 points to Arredondo’s 173. So long as the Trek rider doesn’t abandon the race, he will win the competition.

For Arredondo, a 25-year-old Colombian, the climbing jersey probably means as much as the stage win—one of his nation’s passion is cycling up high peaks.

“Simply incredible. I’m loving this victory—it’s an amazing moment for me, and for my team,” Arredondo told Europsport. “My team have been absolutely amazing supporting me and encouraging me and finally I’ve given them the stage victory they’ve been looking for.

“Of course this is great for Colombia—we’re leading overall—but I just wanted to add something for myself to this, and it’s a blue jersey for me.”

Arredondo told Cyclingnews that his team manager prevented him from attacking to early. “”I have to give a big thanks to my director and coach Josu [Larrazabal]” he explained. “I wanted to attack at the bottom of the last climb but he told me from the team car, ‘No, no no! Take it easy, not yet!’ Then with four kilometer to go he said, ‘Julián, now!’ I won this stage to a great degree from his advice.”

Race leader Nairo Quinatana of Movistar was thrilled to see a countryman win the stage. “It’s a Giro made for Colombians,” he told Cyclingnews. “I am really happy to see that Julián Arredondo won and is also wearing the mountains jersey, which really matters to the Colombians.”

As with Stage 17, it took a long time for a breakaway to form which was acceptable to the General Classification teams. Finally after 40 km Lotto’s Tim Wellins led a small group off the front, which grew to 14 before Arerwedondo attacked to take the KOM points on the Cat 1 San Pellegrino, with Sky’s Phillip Deignan and Dario Cataldo behind him.

The scene was repeated on the Cat 2 Passo del Redebus, but with Cataldo, not Deignan, in second.

The breakaway had almost seven minutes when it hit the day’s final climb, 15 km at 7.6 percent with two 14-percent ramps.

Omega Pharma-QuickStep’s Thomas de Gendt was first to attack; he showed every sign of being able to time-trial his way to the top, as several riders tried to bridge across but weren’t able. Italy’s elder statesman, Ivan Basso of Cannondale, a two-time Giro winner looking for a final bit of glory, kept the chase pace high.

The prompted a response from the Colombians; Arredondo and Duarte retook the lead with four K left in the stage. Arredondo kept pushing, and dropped his countryman 500 meters further on. Duarte tried to catch Arredondo and Sky’s Phillip Deignan tried hard to catch the pair, but neither succeeded. Julián Arredondo took the win by a margin of 17 seconds, with Deignan another 20 seconds back.

Movistar’s Nairo Quintana, in the race leader’s pink jersey, had been protected through almost the entire race, but on the final climb several riders tried to gain back some time from him. Europcar’s Romain Sicard set up an attack by team leader Pierre Rolland. Quintana, with two teammates on hand, covered Rolland’s attack, but when the Europcar rider went again with 2.6 km to go, Quintana let him open a small gap.

The race leader knew that he only had to watch Omega’s Rigoberto Uran; Rolland was over three minutes down in GC. Rolland desperately needed to gain time, however. The span from third to ninth was only 55 seconds; five riders had an excellent chance to take Rolland’s podium position.

Belkin’s Wilco Kelderman set off chasing; eventually he caught Rolland along with Quintana, Uran, and a the rest of the GC top ten—except BMC’s Cadel Evans who had fallen back and was struggling to catch the leaders.

All these riders—except Quinatana— were desperate to improve, but none of them could match the Colombian race leader’s climbing legs. Aru attacked in the last kilometer, Quintana let him go. A few hundred meters from the finish, Quintana attacked, and led his pursuers across the line. Uran stayed close enough to keep his gap; the rest lost at least a few seconds. Aru’s brave late attack only earned him three seconds on the leader.

Still the stage made for quite a GC shakeup. Cadel Evans dropped from third to ninth, 1:38 down. He might get some of that back in the Stage 19 mountain time trial, but his podium hopes are about done. Rolland moved from fourth to third, and Fabio Aru went from sixth to fourth.

Ryder Hesjedal advanced from ninth to seventh, but still lost 16 seconds on the leader. He is only 61 seconds out of third place, but his chances are slim. The three riders ahead of him are 22 seconds of the podium’s bottom step.

Stage 19 is a 26.8 mountain time trial, 26.8 kilometers at an average gradient of eight percent, with maximum inclines of 14 percent. The steepest stuff comes two-thirds of the way through, with a few hundred meters respite before the last three km kick up sharply again. It is short, but this stage will be very, very tough. The potential for great disappointment is very high in this one.

If Cadel Evans is on form, he could gain some time; he is very good at time trialing. However, he hasn’t proven to be extremely good at climbing this week; likely any gains he makes will be small. There might be some motion between positions three and eight, depending on which rider feels better after a night’s rest, but neither Rigoberto Uran nor Nairo Quintana have much to fear.

The final mountain stage is a killer, opening with a Cat 1 climb followed by a Cat 2 and ending on the summit of Zoncolan. Judging by what each rider has shown so far, Nairo Quintana will have no trouble defending his jersey on this stage—but anyone can have a bad day.

The battle behind the young Colombian will be bloodthirsty, with a handful of riders looking for that bottom step of the podium. Also, it is certain that every rider with any climbing ability at all will want to try for a stage win; forget GC, a win on Zoncolan is worth a dozen jerseys.