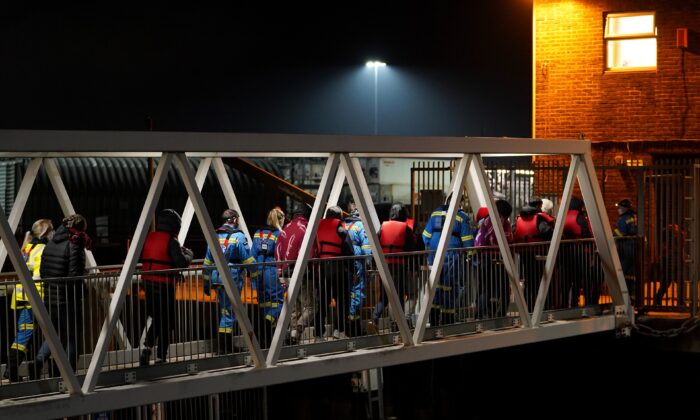 A group of people thought to be illegal immigrants are brought in by Coastguard officers to Dover, Kent, England, on Nov. 11, 2021. (PA)
UK

Around 1,000 people crossed the English Channel to reach the UK on Thursday, setting a new daily record.

Thursday’s total will surpass the previous single-day record for the current crisis of 853 set on Nov. 3, the PA news agency reported.

The figure has not been confirmed by the UK government. But a Home Office spokesman said on Thursday night that the number of crossings was “unacceptable.”

“The British public have had enough of seeing people die in the Channel while ruthless criminal gangs profit from their misery, and our New Plan for Immigration will fix the broken system which encourages migrants to make this lethal journey,” he said.

The New Plan for Immigration, which was announced by Home Secretary Priti Patel in March, was intended to make it more difficult for migrants entering the UK illegally to stay in the country.

Despite government promises to stem the flow of small boats, however, the numbers this year have continued to eclipse those of previous years.

More than 20,000 people have crossed the English Channel illegally into the UK aboard small boats since the start of the year, more than double the total for the whole of 2020.

French authorities said on Thursday that three people were feared lost at sea after two kayaks were found adrift off the coast of Calais.

Illegal migration is a problem not just for the UK, but also for other European countries.

At least 100,907 people have arrived in Europe via the Mediterranean by land and sea so far this year, according to data from the United Nations High Commissioner for Refugees (UNHCR).

At least 1,313 people are estimated to be dead or missing, according to the same data.