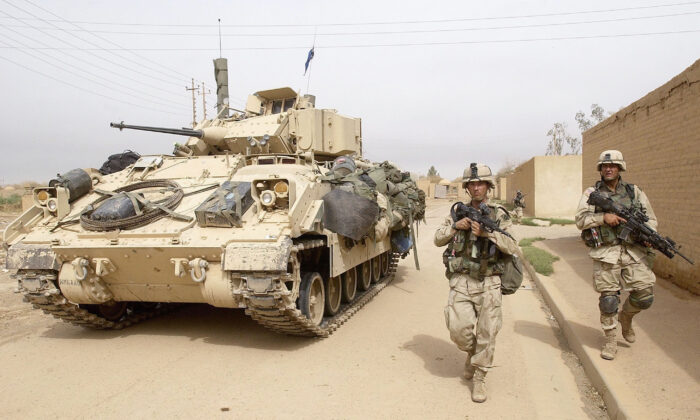 U.S. Army 3rd Division 3-7 infantry soldiers use a Bradley fighting vehicle for cover as they conduct a neighborhood patrol on the outside perimeter of the Baghdad International Airport April 8, 2003. (Scott Nelson/Getty Images)
US News

The U.S. Army’s forced march toward acquiring a next-generation, semi-autonomous fighting vehicle has ground to a temporary halt after all competitors but one dropped out of the prototype competition, unable to keep step with the “aggressive schedule” of modernization plans.

The Army announced on Thursday that it had canceled the rapid prototyping phase of the Optionally Manned Fighting Vehicle (OMFV), the replacement for the Bradley fighting vehicle.

The vehicle was one of five new vehicles demanded by the Army’s up-tempo Modernization Strategy, which identifies next-generation fighting vehicles as the second-highest priority as the army revamps for competition with China and Russia.

The Army said it will revisit the requirements, acquisition strategy, and schedule before moving forward, but said it was still committed to the program.

General Dynamics Land Systems was the only competitor left in the running by the time Congress agreed to fund the program in the 2020 budget.

“The Army asked for a great deal of capability on a very aggressive schedule,” said Dr. Bruce Jette, assistant secretary of the Army for Acquisition, Logistics and Technology, in a statement.

“Despite an unprecedented number of industry days and engagements, to include a draft request for proposal over the course of nearly two years–all of which allowed industry to help shape this competition–it is clear a combination of requirements and schedule overwhelmed industry’s ability to respond within the Army’s timeline.”

Jette said that they remained committed to the OMFV program as the second-highest modernization priority. “The need for this ground combat vehicle capability is real. It is imperative we get it right for our soldiers,” he added.

The vehicle required that it be manned, but also capable of being fully remote-controlled, with the capacity to carry up to six crew members.

The Army’s modernization strategy is helmed by the newly-minted Army Futures Command, which is trying to re-write the rule book on acquisitions and prototyping, ditching historically risk-averse acquisition culture to get prototypes into the hands of soldiers faster.

Army Futures Command has been forging a more dynamic relationship between prototyping and program requirements–allowing them to inform each other more tightly.

“Our buzzword is that we are attempting to ‘move the risk to the left,’” Colonel Eric Smith, who was responsible for writing the strategy, told The Epoch Times in October, referring to a phrase that started its life in the software community, which means to focus on weeding out unworkable options earlier on. In other words, to try to fail early.

The budget for the now-stalled prototype program was $205.6 million. In total, the Army expected to pay $1.9 billion for research and development and more than $43 billion for procurement to buy about 3,800 vehicles, reported Inside Defense.

“We’ve spent a very small amount of money in trying to get to where we are, and in fact a good bit of the technology development that was part of the assessment phase is still totally recoverable,” Jette told reporters, according to Defense News.

“The most prudent means of ensuring long-term programmatic success is to get this multi-billion-dollar effort correct,” said Gen. John M. Murray, commander of Army Futures Command, in a statement. “We are going to take what we have learned and apply it to the OMFV program to develop our path and build a healthy level of competition back into the program.”

The Army has twice tried and failed to replace the M-2 Bradley IFV, with both programs in the past decade falling into the so-called “valley of death”—the long process between prototyping and fielding that can kill off programs.